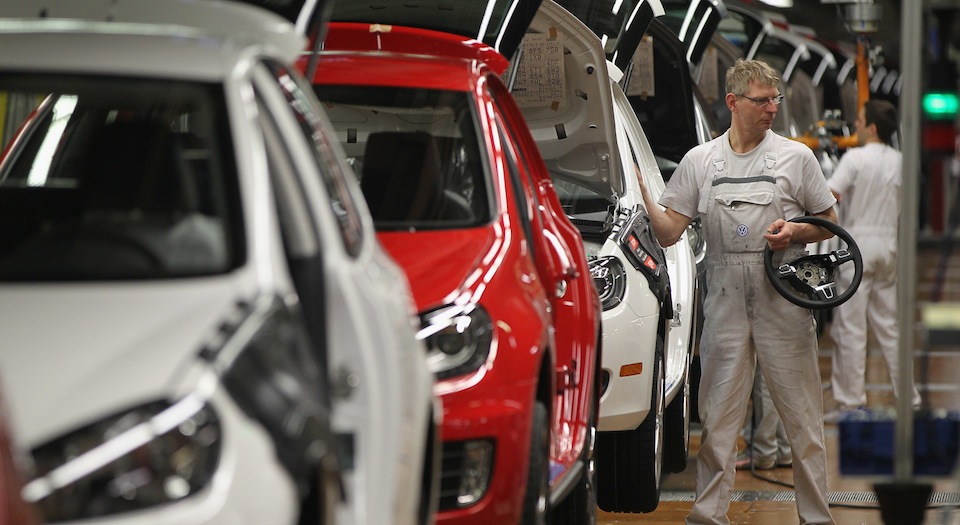 Germany has seemingly enjoyed an unprecedented rise in employment over the past 10 years. That means that even since the financial crash in 2008, the number of Germans in employment has risen by five million to 44.7million. This ‘jobs miracle’ prompted then labour minister Andrea Nahles to declare that the job market is now ‘at its best’.

But appearances can be deceptive. The labour market is nowhere near as healthy as Nahles claims. As Clemens Fuest, the president of Ifo-Institute, a leading economic think-tank, pointed out, wages are only rising very slowly, at an annual rate of 1.5 per cent when inflation is taken into account, despite an economy running at ‘full steam’. Not that this should be a surprise. In real terms, wages have been stagnating since the 1990s, and for some sectors they have even been falling. Many observers have referred to this as the ‘wage mystery’ or ‘wage paradox’.

So why are wages barely rising while the economy, and labour market, seems to be healthy? Some rightly point to the weakness of trade-union organisation as a contributing factor. But more significant still is the anaemic reality of Germany’s economy, which has proved incapable of creating the conditions for rising wages.

If you look more closely at the German economy it becomes clear that the number of wage labourers is less significant than the actual economic demand for labour. Yes, the number of employees subject to social insurance contributions has increased by five million over the past decade, but only one million of those new jobs were full-time. So while there are more employees than ever before, they are individually working less. The stats bear this out. Back in 2006, every employee worked an average of 1,425 hours per year. By 2016, this had fallen to 1,363 hours per year. It is expected that this year, Germans will work a total of 60 billion working hours – the same level reached by fewer working Germans in 1991.

The emergence of ever more part-time roles is not wholly in accordance with the wishes of workers. In 1998, 13 per cent of part-time workers wanted to work full time; in 2008, this had risen to 23 per cent, before falling to 15 per cent in 2014 (1). However, since the number of part-time workers has approximately doubled since 1998, the absolute number of those wanting full-time employment has clearly risen. It follows from this not that there has been a decrease in underemployment within the part-time sector, but a distinct increase.

A similar conclusion was reached by the Institute of the Labour Market and Vocational Research (IAB). According to the IAB, underemployment decreased slightly between 2009 and 2014, and should have continued to fall after that. However, the IAB’s analysis of the express needs of both the registered unemployed and employed shows that underemployment has barely fallen at all. The IAB found that underemployment ran at 5.6 billion hours, which corresponds to a shortage of about 3.4million full-time jobs.

A recent analysis by the International Monetary Fund (IMF) found that one of the main reasons for conspicuously low wage increases in developed economies since the financial crisis is the pressure on full-time wages exerted by an army of part-time workers who want full-time employment (2). Nevertheless, the IMF attributes low wage rises in the main to low productivity growth. In Germany, this problem is particularly acute because the overall productivity of labour is only growing by an annual rate of 0.5 per cent, which is close to stagnation. As the companies can no longer create the conditions for cheaper and more efficient production methods, the leeway to increase wages is limited. Wage increases are then only possible by shifting the burdens. Companies could, for instance, accept a lower return on their capital to the benefit of higher wages, or they could increase prices, which would burden customers and consumers. Stagnant levels of labour productivity lead to a stagnation in society’s prosperity as a whole, because society is no longer capable of achieving the same labour results with less labour input.

Not that companies seem very keen on increasing productivity. As a report by the Institute for the World Economy (IfW), commissioned by the German federal government, discovered, wage costs are so low because, since 2000, it is more attractive for companies to employ additional workers rather than investing in full or even partial automation. Hence, the current employment boom is a consequence of an economy driven not by innovation and productivity, but by economic stagnation.

The feeble levels of productivity are illustrated by the economic areas in which people have been finding work — namely, in those areas that have a labour productivity of below average and which typically achieve only small productivity increases over time. That means an increase in jobs, not in industry, but in the service sector, including the hotel and restaurant trade, public health and social services (3).

Low levels of productivity growth lead to an economic cul-de-sac, resulting, at best, in an expansion of employment on an existing and unchanging technology base. Not that the German Federal Ministry of Finance seems to mind. It thinks that ‘the falling productivity as a result of the job creation of recent years is acceptable, considering the historically low levels of unemployment’.

If the economic brakes that hold back progress and product innovation cannot be released, then neither real wages nor societal wealth in general can rise. Growth in wealth for individual workers will then only be possible through an increase in working hours. More and more employees are going down this path, taking second and even third jobs. The growing labour-force participation rate among people of retirement age is testament to the same economic dynamic.

Clearly employees in those areas where underemployment has been reduced, and where companies need employees with the necessary qualifications, could enjoy wage rises. But if the companies are incapable of achieving higher productivity, they will eventually lose their competitiveness. Consequently, it is an illusion to think that the supposed wage mystery is to be solved by the implementation of drastic wage increases through political regulation. Rather, it must be the task of politics to tackle the low level of technological innovation within the economy so as to lay the basis for productivity-boosting economic growth. Only then would a more prosperous society, enjoying higher wages and better jobs, become possible.

Alexander Horn works as a business consultant. He is managing director of the German political magazine Novo and writes on economic issues.