Italy has dealt a blow to the EU

But the nation still longs for a real populist alternative. 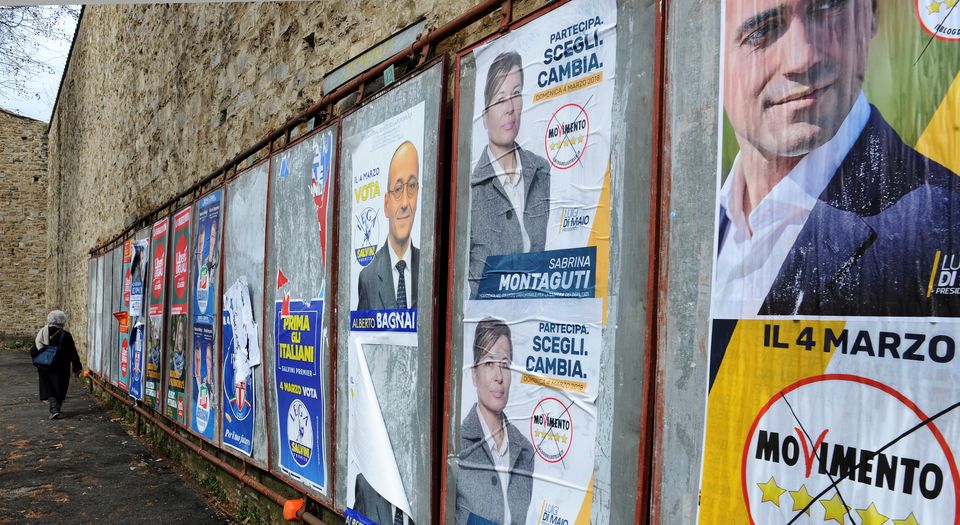 After this weekend’s election in Italy, the political future of Italy remains uncertain. None of the parties or coalitions has enough votes to form a government. But one thing is clear: the majority of the Italian people voted for Eurosceptic parties. Despite the confusion surrounding the shape of Italy’s next government, the blow that this election inflicted on the EU establishment is the Italian equivalent of the vote for Brexit. And the emergence of the Five Star Movement as the party with the largest number of votes exposes the loss of authority of Italy’s political establishment. The governing centre-left Democratic Party (PD) has become an exhausted political force. It was even beaten by Eurosceptic movements in its former strongholds of Emilia Romagna and Umbria.

More than any other election in Europe, the vote in Italy this weekend highlights the unravelling of the postwar parties of the mainstream. The focus of the media has been on the rise of populists and anti-EU movements and parties, such as the Five Star Movement. But what this emphasis overlooks is that the precondition for the emergence of these movements was the disintegration of the three main parties that dominated Italian politics until the early 1990s – the Christian Democrats, the Communist and the Socialist Parties. The new players in the Italian political scenes are the beneficiaries of the shambolic retreat of the parties of the old order.

Since 1994, when the media tycoon Silvio Berlusconi was appointed prime minister, Italy has experienced a protracted period of political stasis. The Italian political class has always been closely integrated with the state bureaucracy. Even the left and the communists were afforded access to its patronage. One of the consequences of the Berlusconi era was that it further depoliticised public life and emptied party rivalry of any substantive content.

Sections of the Italian political elites, along with their colleagues in the EU, are at a loss to explain why Paolo Gentiloni’s centre-left government has failed to gain the trust of the electorate. Technocratic supporters of Gentiloni’s PD have argued that Italy’s economy has slowly recovered and the nation is finally going in the right direction. They insist that people who voted for the populist Five Star Movement or the alliance of the right-wing Lega and Berlusconi’s Forza Italia simply do not know what is in their best interests.

In truth it is unsurprising that, in this election, millions of voters have opted to support untested movements. Italians have become fed up of living under a variety of uninspiring centre-left and centre-right governments. They are also aware that the Italian elite, which has worked hand in glove with the EU technocracy, is both indifferent and unresponsive to the needs of the electorate.

Hostility towards the EU is widespread in Italy. Brussels has at times openly treated Italy as its fiefdom. In 2011, the then prime minister, Berlusconi was forced to defer to international pressure and resign. A former EU commissioner, Mario Monti, was appointed in his place. This EU-inspired coup was orchestrated with the help of President Giorgio Napolitano. Formerly a leading member of the Italian Communist Party, Napolitano played a key role in preparing the way for the coup. He schemed to have Monti appointed as senator for life, so that a week later he could become a ‘legitimate’ prime minister. It is worth noting that Monti’s government did not include a single elected politician. That’s the kind of government that draws praise from the EU Commission.

Since the 2011 coup, Italy has been governed by pro-EU technocrats, very much in the Monti mould. These out-of-touch politicians have proven to be unable to engage with the public. The track record of the PD is important in this respect. Though it presents itself as a party of the left, it tends to be perceived as an institution that represents the interests of the affluent middle class and the economic and cultural elites.

In recent years, so-called left-wing parties have been beset by bitter divisions. The PD has lost some of its support to the Free and Equal (LeU) alliance, led by Pietro Grasso. Both the PD and LeU have shown that they do not have the capacity, or the interest, to represent the working class and the poorer sections of society. They have become parties of the public sector and have sought to appeal to well-educated voters in permanent salaried employment.

The populist revolt against the Italian establishment is to a considerable extent driven by people who feel economically insecure and feel threatened by mass migration. They also feel that their voice was entirely ignored by the old political regime.

What the Italian election shows is that there is a very real demand for new answers, and for a movement that could give voice to the aspirations of the Italian public. Unfortunately, many of the parties that present themselves as that new movement, such as Lega or Forza Italia, represent interests that have let down Italians in the past. The attempt by Berlusconi’s Forza Italia to present itself as a breath of fresh air relies on people forgetting just how much they were failed by this party in the past.

Unlike those old parties masquerading as if they had just appeared on the scene, the Five Star Movement led by Luigi Di Maio can actually claim to represent a relatively new movement. Unfortunately, the Five Star Movement remains a relatively incoherent and unstable force. It is run by a heterogeneous group of individuals, who appear to make it up as they go along. Many support the Five Star Movement because it appears to be different from the others. Yet, though it may be different, it does not constitute a genuine alternative because many of its leaders and activists are far from clear about where they stand on issues of substance. Nevertheless, its promise of a monthly universal wage of up to 780 euros has proved popular with the poor, particularly in the south of the country.

The sizeable vote for the relatively new Five Star Movement is important because it demonstrates that there is a demand for a genuinely radical, democratic alternative to the EU-dominated old Italian political class.

Like the Five Star Movement, the various Italian Eurosceptic parties, such as Matteo Salvini’s Lega and Giorgia Meloni’s Brothers of Italy, have benefitted from the anti-establishment mood prevailing in Italy. However, these parties have roots in the old system of Italian pork-barrel politics and have nothing positive to offer the people. Their willingness to unite with Berlusconi’s tired old Forza Italia indicates that what they offer is more of the same.

Despite the media talk of the populist wave overwhelming Italy, most of the main actors in this election were anything but populist. Yes, Euroscepticism is widespread, but this attitude is not necessarily an expression of a substantive populism. The absence of left-wing populism is particularly striking in a land where it is integral to the historical legacy of the left. Italy counts Antonio Gramsci – one of the principal theorists of leftist populism – as one of its leading thinkers. If poor old Gramsci is not turning in his grave, he is at least wondering why 21st-century Italian leftists have given up on the people.

The most significant and positive outcome of this election is that it has further undermined the legitimacy of the EU. But that’s not much comfort for the people of Italy. What they really need is a genuinely open-minded and liberal populist movement.