The EU is no friend of Irish independence

It wants to exploit border tensions to erase sovereignty in the UK – and Ireland. 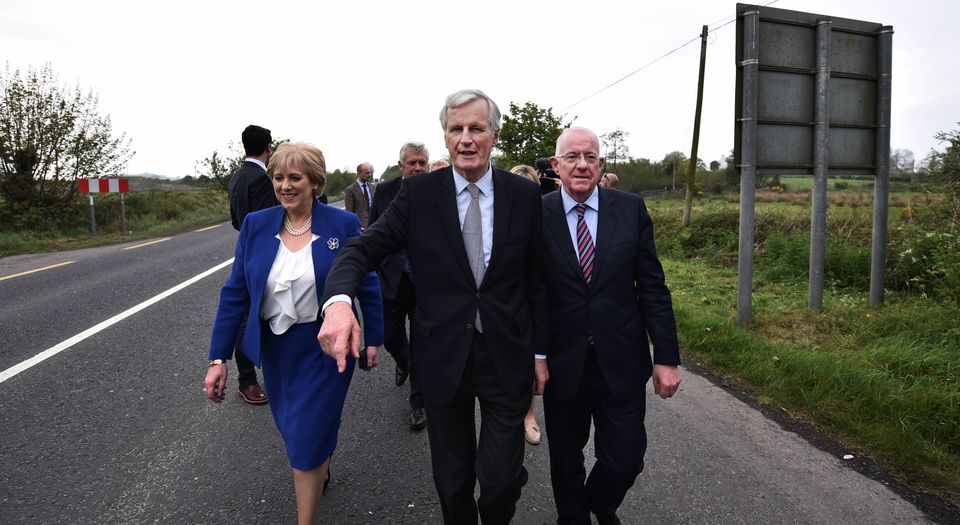 As a freedom-loving democrat, I have long supported the view that Ireland should be one united, 32-county sovereign republic.

But, as a freedom-loving democrat, I am fiercely opposed to any attempt via the European Union to impose some bureaucratic version of ‘Irish unity’ in order to undermine Brexit. That would be a serious attack on sovereignty and democracy in both Britain and Ireland.

The border between Northern Ireland and the republic is, we are continually told, a major barrier to any Brexit deal between the UK and the EU. Raising the spectre of a post-Brexit return to a ‘hard border’ – which nobody wants – leading Remainers have suggested instead that Northern Ireland should enjoy some ‘special status’, such as remaining part of the European Single Market and Customs Union even when/if the rest of the UK leaves.

These efforts further to ‘soften’ the Irish border and undermine Brexit are supported not only by the EU elites and the southern Irish government, but also by Sinn Fein. Once the republican political wing of the Provisional IRA, fighting for Northern Ireland to leave the United Kingdom, Sinn Fein has now effectively become the provisional wing of the establishment’s Remain campaign, fighting for Northern Ireland to remain chained to the EU.

Let’s be clear – these attempts to undermine the border today have nothing in common with past demands for Irish unity. When the whole of Ireland was incorporated into the United Kingdom, republicans campaigned and fought for national independence from British rule. After Partition in 1921 ended the War of Independence by dividing the island, leaving the six counties of Northern Ireland as part of the UK, republicans demanded that their whole nation should be united and truly independent.

Whichever side you took in these struggles, they were obviously about sovereignty and national self-determination – the issue was who had the right to exercise sovereign control over Ireland’s affairs. By contrast, the EU’s agenda on the Irish border is part of its wider crusade to undermine national self-determination and popular sovereignty in Britain, Ireland and across Europe.

The EU elites want further to ‘soften’ the border in Ireland not because they support national unity, but because they despise national sovereignty and the democratic politics it enables. Shortly after the Brexit vote, European Commission president Jean-Claude Juncker spelt out the EC view that ‘borders are the worst invention ever made by politicians’, and called on Europe to support migrants. Such a liberal- and progressive-sounding statement, however, was not what it seemed.

If the EU were really against borders, why would it have spent billions building ‘Fortress Europe’ to keep migrants outside its walls? If it was really pro-migrant, why would thousands of them be drowning in the Med while trying desperately to evade its border controls?

No, the borders Juncker and Co despise are only national borders within Europe, and the popular politics which go with them. They believe that national sovereignty is a bad thing because it allows people too much say over what happens in their nation. It is a loathing for popular sovereignty and democracy, rather than a love of free movement, which motivates their campaign against borders across Europe.

That is why, at a moment in history when there is no popular movement for national unity in Ireland, the EU is so keen to put the Irish border on the agenda. It is about undermining the sovereignty of both Britain and Ireland, and investing yet more power in the hands of supranational Euro-institutions (meaning ‘above, over or beyond’ national control) that are not accountable to any of the peoples of Europe.

It might seem bizarre that anybody would accept the claims of the EU/EC to be a force for freedom and democracy in Europe. Just look at the contemptuous way in which they have trampled on sovereignty and democracy in member states such as Greece, Italy and, er, the Republic of Ireland, effectively imposing unelected technocrats to run them during the financial crisis. When the Irish dared to vote against endorsing the EU’s centralising Lisbon Treaty in a 2008 referendum, the EU elites demanded they hold a second vote to achieve the ‘correct’ result, then spent a year using economic and moral blackmail to twist Ireland’s arm into voting ‘yes’.

Yet the Irish political class, led by Fine Gael Taoiseach (prime minister) Leo Varadkar, is now rooting for the EC as the supposed champion of Ireland’s interests in the Brexit talks. They are acting as the patsies of the EU elites, a cat’s paw that can be used in the fight against UK sovereignty. In the process they are abandoning Ireland’s own claim to sovereign independence.

And that goes double for Sinn Fein, the former republican party now operating as the provisional wing of the anti-democratic Remainer lobby. It was fitting that outgoing leader Gerry Adams should praise Labour’s Jeremy Corbyn last week, at the same time as denouncing Brexit as a ‘disaster’ for Ireland. Both Irish republicans and the Labour left have undergone a similar retreat on the EU.

Like Britain’s Bennite left, Sinn Fein was opposed to Ireland’s EU membership on democratic grounds in the Seventies and Eighties as Adams rose to the leadership. Ten years ago, Sinn Fein campaigned against adopting the Lisbon Treaty and further EU expansion and centralisation. Now it has abandoned that independent stance to become a megaphone for the EU elites against Brexit. Sinn Fein’s new leadership, under Dubliner Mary Lou McDonald, reflects its Labour-like transformation into a party more of the metropolitan Remainer middle classes.

Straight after the June 2016 referendum, Sinn Fein said the fact that 55.8 per cent of those who voted in Northern Ireland had backed Remain meant there must be a cross-border vote on Irish unity. Posing as the party of 440,000 Remainers in the north seems quite a departure from the republican movement’s historical claim to speak for the Irish people as a whole. But expecting the EU to achieve what the IRA failed to win is a fantasy. In reality, a vote to stay in the EU is in no way a demand for national unity and independence. It is a vote to remain under the sway of a Euro-elite that is about as democratic and accountable as the colonial regimes of old.

The current stalemate in attempts to form a power-sharing executive in Northern Ireland demonstrates that the historical problems of Irish politics have not gone away. But these issues can only be resolved by the Irish people themselves, and between the peoples of Britain and Ireland. No good can come of handing over to the EU more power to police Anglo-Irish affairs or decide and rewrite our borders.

The focus on ‘softening’ or even erasing the Irish border under the auspices of the EU elite is a dangerous obsession. It would do nothing to further the cause of unity, sovereignty or democracy on either side of the Irish Sea. It could only further undermine the prospects for popular sovereignty on both, by collapsing all of Ireland and by extension the UK as currently constituted under the effective remit of a foreign body.

Sovereignty has a bad name in many circles today, associated with dangerous ideas of nationalism. Yet in truth it remains the only basis for a democratic society yet invented by humanity. That is why it is so unpopular with the fashionable demophobes who see popular democracy as a disease to be eradicated.

During the historic Easter Rising of 1916, the modern birth of the Irish nation, the rebels famously issued their Proclamation of the Irish Republic. It declared ‘the right of the people of Ireland to the ownership of Ireland and to the unfettered control of Irish destinies, to be sovereign and indefeasible’. Just over a century later, it remains hard to imagine them adding ‘…except as fettered, defeased and controlled by the rules and regulations of the EU’.