No, today’s feminists are not The New Suffragettes

They fought for power – you fight for protection. 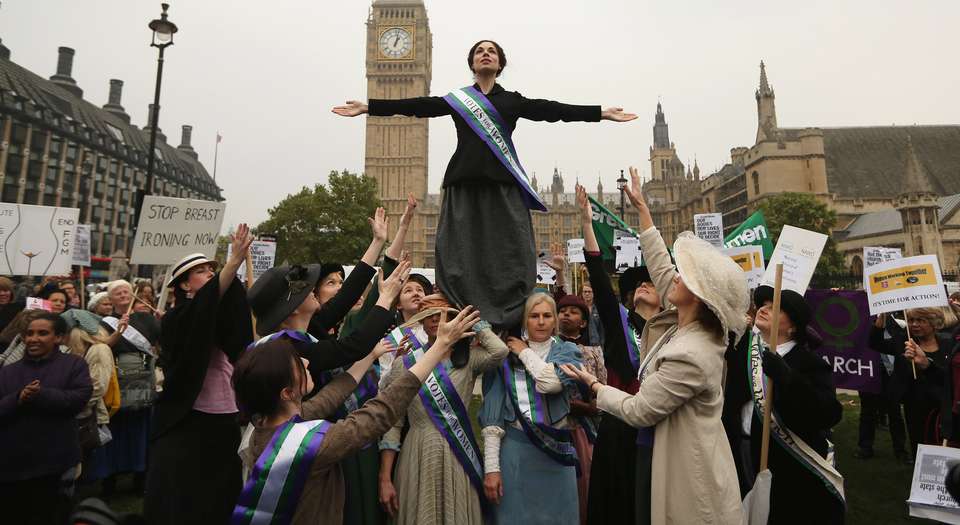 The celebration of the centenary of the Representation of the People Act, which gave propertied women over 30 and working-class men the right to vote, has been fascinating. United in their cooing over the Suffragettes, the political class and many columnists have been tweeting and soundbiting to anyone who will listen about how deeply they love that historic victory for women.

Some feminists have even claimed that the Suffragette cause is alive and well, as evidenced in the #MeToo ‘movement’, the BBC’s equal-pay warriors, and the well-connected women facing down sexist trolls. They can’t be serious. If we were able to bring the Suffragettes back from the dead, I bet they would have some bones to pick with those posing as their heirs. Indeed, if the celebrations have told us anything, it’s how misunderstood the Suffragettes now are – and how deluded contemporary feminists have become.

The first insult to the Suffragettes came in the shape of a demand that they be pardoned. Labour leader Jeremy Corbyn said we should ‘both pardon the Suffragettes and give an official apology for the miscarriages of justice and wider persecution they suffered’. He was supported by the Fawcett Society and other women’s equality campaigners.

As historian Krista Cowman told BBC 5Live, a posthumous pardon from the state would have the Suffragettes ‘spinning in their graves’. It was their very willingness to commit illegal acts – to cause disruption to the state and society – that separated them from the softly-softly approach of the Suffragists. The militancy of the Suffragettes was what proved that they would not let men, or polite society, get in their way. To pardon their daring would be bizarre.

The second insult was the attempt by some feminists to abuse the Suffragette legacy for personal gain. Last month, British Vogue ran a piece cheering ‘The New Suffragettes’, featuring, among others, an artist, an author, a trans activist and the Labour MP Stella Creasy. None of these women have achieved anything of note, apart from perhaps the boosting of their own public profiles.

Gillian Wearing, one of the chosen New Suffragettes, told Vogue: ‘We need to change people’s inner stereotypes of women. And, that’s harder than fighting for the vote.’ What a cavalier insult to the women who struggled so hard for voting rights. There is no comparison whatsoever between Sylvia Pankhurst being forcefed in jail as punishment for her political campaigning and Creasy and others tweeting in between lunches and their nice jobs about the latest advert or troll who has upset them. The gall of these women using Suffragette sacrifices to boost their own online fame.

The third and perhaps most ironic insult to the Suffragettes is the fact that so many of those celebrating them seem to have forgotten what they fought for: greater democracy.

In its statement celebrating the centenary of the 1918 Act, the Women’s Equality Party said: ‘Women must also fight for the protections and rights they have won over the last 100 years – particularly as Brexit brings more uncertainty.’ They celebrate the anniversary of women’s suffrage and in the same breath pour scorn on the largest democratic vote in British history. This has been a recurring theme this past week: some of the very MPs and journalists celebrating The Vote have in recent months been at the forefront of agitating against our vote for Brexit. Feminists like the fact that women have democratic rights – except when women use those rights to demand something these feminists don’t approve of.

Over the past 100 years, women have gained so much. Unlike those in 1918, we can vote, work, live independently, divorce, have sex without getting pregnant; we are free agents. Yet too much of contemporary feminism and mainstream politics seem determined to row back some of these hard-won freedoms. To mark the centenary of votes for women, prime minister Theresa May promised to make it illegal to intimidate politicians. She was largely spurred on to this by female politicians’ complaints in recent years that they face abuse online. In the name of ‘protecting women’, May is seriously threatening our right to protest against powerful people.

The Suffragettes weren’t all the same. Some were politically nasty. The more acceptable Suffragettes, Christabel and her mother Emmeline, were deeply conservative and campaigned for working men to be sent to war, even handing out white feathers to men who weren’t in uniform to mock their cowardice. Sylvia, meanwhile, was more radical: the dishevelled heroine of the Suffragettes who argued that the fight for women’s suffrage should be intertwined with the fight for workers’ rights.

But, crucially, the Suffragettes were united in their radical demand that society stop treating women as in need of protection from politics or men. Today’s wilting wall-flower feminism, which constantly calls on the state to protect women, does a disservice to the Suffragettes. It is time for a history lesson – there is no comparison between today’s brand of narcissistic feminism and the brave women who fought for democracy in the early 1900s.