One year on: the lethal folly of calling Trump Hitler

We mustn’t forget, or forgive, the anti-Trump lobby’s Nazi comparisons. 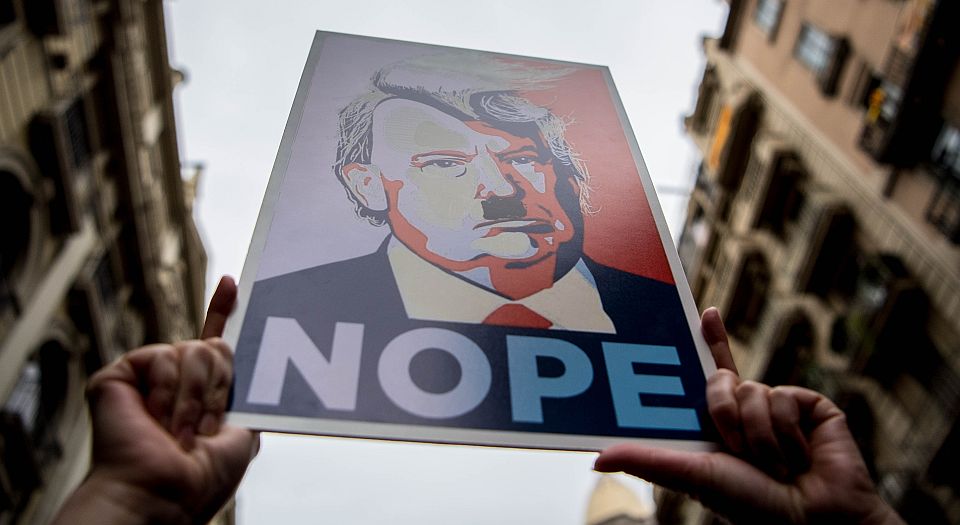 America is doing okay, isn’t it, considering it is run by a Nazi. Considering that for the past year it has been governed by a man who more closely resembles Hitler than any other living Western politician. Considering it is now borderline a fascist state in which, in the words of one British diplomat, there are ‘shades of 1933 Germany’. Twelve months into Donald Trump’s fascist experiment, one year on from his warping of the American republic with ‘fascist rhetoric’, America seems to be functioning well. The president’s political opponents haven’t been imprisoned, political debate remains free and open, no concentration camps have been opened, and the Constitution is intact. Maybe this Nazism thing isn’t so bad after all?

This is the lethal consequence of the Hitler-comparing hysteria that gripped the Western commentariat over the past year: it has demeaned the memory of the Nazi experience. It has made Nazism seem ‘not that bad’. It robs the horrors of mid-20th-century Europe of their uniqueness, their historical specificity, and makes them seem like things that happen all the time, which are always in the air, even in the free, open, peaceful air of 21st-century America. They normalise, and thus downgrade, the suffering under the Nazi tyranny. In calling Trump ‘Hitler’, these Hillary-supporting throwers of the loudest political hissy fit of modern times imagine they are landing a serious blow on Trump, but they are doing something else, too, something really bad: they are letting Hitler off the hook by misremembering him simply as a bad man, as a Trump-style blowhard, rather than as the great criminal of the 20th century whose like is found nowhere — nowhere — in America or Europe today.

It is important to remember, and to continue to criticise, the anti-Trump lobby’s reckless use of Nazi imagery and Holocaust comparisons. This cannot be allowed to pass smoothly into a history, chalked up simply as an angry outburst after their candidate lost to Trump. There’s too much at stake: historical memory, truth, reason itself. So we must look back at what happened a year ago, when Trump was inaugurated and when it became okay to throw around the f-word, even the N-word. ‘Donald Trump is a fascist’, declared a writer for the Washington Post in black and white. Even Barack Obama, in the words of one report, ‘made reference to the rise of Nazi Germany in the 1930s’ when he said a Trump presidency would damage American democracy. Peter Westmacott, who was British ambassador to the US until 2016, said the rise of Trump had ‘shades of 1933’.

Historians cast sense and decorum to the wind in their rush to be part of the panic about the return of Nazism. Republicans, said Timothy Snyder, are like ‘1930s German conservatives’ who were overcome by the ‘radical right’ — that is, by Hitler’s Nazi movement. Ron Rosenbaum, author of Explaining Hitler, said Trump was working from ‘the playbook [of] Mein Kampf’. Politicians got in on the Nazi-talk. British Labour MP Dennis Skinner spoke of Trump in the same breath as ‘fascist dictators Mussolini and Hitler’. Labour’s Yvette Cooper drew a link between Trump’s ban on migration from certain Muslim-majority countries and the events of the Holocaust. As did the Guardian. It said Trump’s presidency was a ‘slap in the face’ to those who promised to learn from the Holocaust. Trump is a ‘fascist authoritarian’, said Salon. He combines the ‘bullying and threats’ that also defined the Hitler era, said another observer, as if Nazism was merely politicians being mean.

The use and abuse of the Holocaust era, the exploitation of the Nazi experience to dent Trump’s legitimacy, was widespread. It could be seen on demos against Trump, too, on which placards depicted him in a Hitler moustache or warned us against ‘a repeat of the 1930s’. On a London march, one group of people held placards showing Trump dressed like Hitler alongside the words: ‘We’re history teachers — we know how this ends.’

Let’s hope these people aren’t teaching your kids. For it is hard to think of anything more historically illiterate, and more dangerously cynical, than the casual branding of Trump as Hitler and the widespread hints over the past year — the predictions, even — that his rule would end the same way Hitler’s did: with death camps, presumably, and millions dead, and global war, and the absolute destruction of liberty, political freedom and the rule of law. None of that has happened, of course. The Hitler talk was so much steam, with observers rummaging around in history for the strongest political terms with which Trump might be branded and condemned. This has made it more difficult to see what is new and different and, yes, problematic about Trump’s administration. The unhinged Nazi talk discourages reasoned analysis in favour of chasing the cheap thrill of yelling ‘fascist!’ at someone you don’t like. It is profoundly anti-intellectual.

But it does something worse than muddy the present and harm rational debate about politics today; it also ravages the past; it relativises the Nazi experience and, unwittingly no doubt, dilutes the savagery of the Holocaust through comparing that immense crime with what is simply an elected American administration many people don’t like. This might not be Holocaust denial, but it is certainly Holocaust dilution. It is Holocaust relativism. And as some historians have been pointing out since the 1970s, Holocaust relativism, the treatment of the Nazi era as just a wicked brand of politics that crops up every now and then, including now, is the foundation stone of the vile prejudices that underpin actual Holocaust denial. It ‘minimises Nazi atrocities’, as one guide to the Holocaust put it, which in turns fuels the conviction of many Jew-haters: that the Holocaust and the events that nurtured it were not that a big deal. Calm down, Jews.

This is why we cannot forget or forgive what they said about Trump — not because we need to protect Trump from insult, but because we need to protect historical memory from destruction. This is the terrible irony of the worst outbursts of anti-Trump hysteria over the past year: it presented itself as a challenge to an ascendant neo-Nazism, yet its casual, thoughtless use of the Nazi spectre promoted a history-rewriting view of the Nazi era that benefits no one except neo-Nazis.