An anti-capitalist is the most bourgeois thing you can be 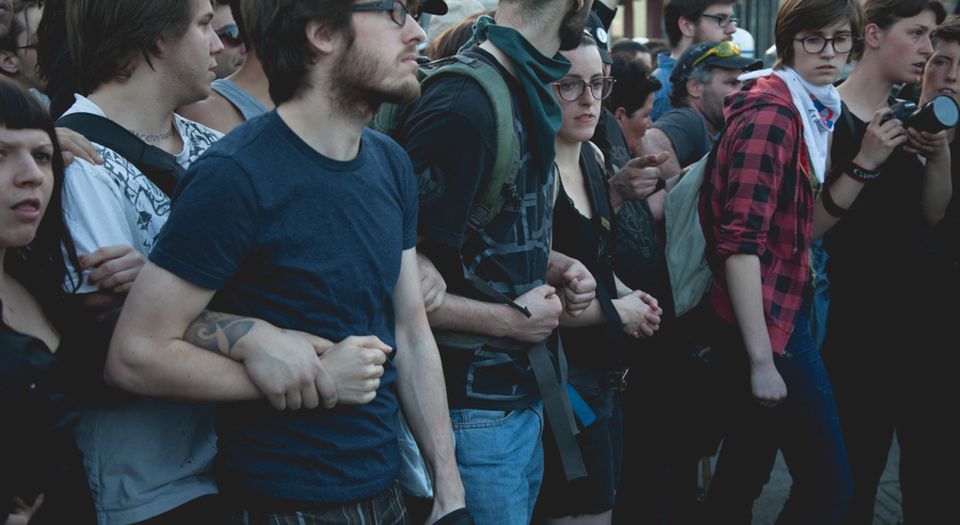 Last night in New York City I went to a Jacobin debate about the evils of capitalism and I swear I haven’t seen this many bourgeois white people whooping and cheering together since I saw Macklemore perform at the Brixton Academy a couple of years ago. Of course on one level it doesn’t matter what colour the majority of attendees were, or how painfully hip was their garb and their gab as they hooted like the audience of The Jerry Springer Show every time someone said life under capitalism is really shit (except for us, said the woman from the New York Times who was moderating the event). But here it kind of did matter, because most of the discussion was about the working class, and the working class was not there. I wager they weren’t following it on Twitter either.

Jacobin, a magazine for Park Slope socialists, organised the event with Reason, a magazine for libertarians which believes, in the words of its editor-in-chief Nick Gillespie last night, that ‘married gay couples ought to have the right to protect their marijuana plants with guns’. (Disclaimer: I write for Reason.) It was titled, simply, ‘Capitalism: A Debate’ and it took place in the Great Hall of the Cooper Union on 7th St, which was a real thrill for me because this is the hall in which Frederick Douglass gave one of the great American speeches, on the Proclamation on Emancipation, in which he said ‘at last the out-spread wings of the American Eagle afford shelter and protection to men of all colours’. (He then went on to defend free speech for racists, by the way, on the grounds that there should be no ‘limit [upon] the right of simple utterance of opinion’. An actual former slave defended free speech for ‘detestable’ people and yet today Ivy League white students will not – remarkable.)

I knew the debate was going to be somewhat unsatisfying when Michelle Goldberg (she of the NYT) kicked things off by saying she had only lately become concerned about capitalism because she has been reading horrible things about workers being made to wear diapers so that they don’t have to take bathroom breaks, and so on. Here we go, I thought: this is going to be more moralistic than Marxist, more Dickens than Trotsky, a pained middle-class cry against horrible CEOs and the reduction of workers to wretches rather than a political analysis of what capitalism is and where it’s at right now. I wasn’t disappointed. (Or was, rather.)

Following Gillespie’s mirthful expression of regret that people at the NYT must wear diapers at their desks (to which Ms Goldberg responded, ‘If everyone enjoyed the working conditions we have at the NYT, we wouldn’t have to debate capitalism’ – rub it in, why don’t you!), the discussion drifted into a bizarrely ahistorical handwringing over capitalism.

The Reason side (Gillespie and Katherine Mangu-Ward) made a good fist of defending choice and consumerism and particularly individual autonomy, which they argued was the founding ideal of the bourgeois era. Mangu-Ward got a laugh from the soft socialists and hip Maoists who made up the vast bulk of the audience when she said capitalism is responsible for the mobile phones ‘on which you are probably tweeting right now about what an evil capitalist I am’. The Reason team was less good on democracy. Many libertarians think democracy conflicts with individual autonomy, and it is probably the wrongest thing they say. But that’s for another article. Then it came to the Jacobin side, and things just got weird. I felt like I was in a timewarp. You would think, listening to these guys, that capitalism hadn’t changed since 1880.

On the Jacobin team there was Vivek Chibber, a professor of sociology at NYU, and Bhaskar Sunkara, an editor at Jacobin. Mr Chibber did most of the speaking. He is very concerned about working-class people because they have awful lives. They have no freedom! In the workplace, where they spend most of their time, they are ‘told what to do, when to eat, when to take a piss’, he complained, and they’re so exhausted by the end of it that they can’t do anything in the evening other than get ready for the next day. It’s amazing they don’t all kill themselves. The audience applauded wildly, clearly concerned by Mr Chibber’s description of the lives of these people they have never met. You’ve heard of virtue-signalling – behold virtue-applauding. ‘This audience is very bougie’, Mangu-Ward said at one point, and I’m sure I felt the entire room shift as 900 people defensively clutched the arms of their seats in fleeting, painful recognition of just what a posh pursuit anti-capitalism has become.

The way Mr Chibber was talking, you’d think children were still up chimneys, women in shawls were still selling soap on misty bridges while wondering if they shouldn’t just throw themselves into the murky waters below, and sweating, obese factory bosses were yelling ‘Take your shit at your lathe, Bruce: the bathroom’s closed’. It’s a perverse middle-class fantasy. An ironically paternalistic view of depressed, deprived workers who, unlike us, unlike people who can pay $11 to discuss how awful capitalism is on a Friday night in downtown Manhattan, are little more than slaves. Mr Chibber actually said this: being working-class is marginally better than being a slave or a serf. That’s wrong. Factually and morally. In slavery you are owned body and soul by another person and enjoy no individual autonomy. Under capitalism you are not. Doesn’t this distinction matter? I couldn’t help wondering what the women on the door at the Cooper Union, who were black, would think of the heaving hipster crowd downstairs clapping over the idea that they and the rest of the working class are not far above slaves. And heaven knows what Douglass would think, who cheered the fall of slavery in this very hall.

Even as the Jacobin side recognised the improvements in working life that have been demanded and won over the decades by trade unionists and leftists and reformers, still they talked about life under capitalism as awful. Occasionally they had to speak about the Third World, desperate for some actual examples of the harsh, Victorian-style capitalism they fantasise is still dominant. Yet as Mangu-Ward pointed out, millions of people have been lifted out of poverty as China and India have embraced capitalism (a capitalism that is far, far from perfect, she said). Their lives are better. The liberation of vast swathes of humanity from grinding poverty should be cause for celebration, yet from the comfort of Manhattan some look at these foreign nations undergoing industrial and economic revolutions and yelp: ‘Eurgh, capitalism.’

Something became clear to me during the discussion: the old radical-left insistence that bourgeois values like individual autonomy and choice and freedom of speech are all well and good but they will never be realised under the current economic system has become an excuse; a way of avoiding thinking about how to win greater freedom and democracy; a justification for complaint over struggle. Given that there is zero prospect of a socialist revolution anywhere in the West anytime soon (or ever again?), what does this insistence mean? It means that anti-capitalism has become a fatalistic pursuit, a comforting exercise in complaint, a self-aggrandising knowingness about the lameness of life, the pastime, almost exclusively, of the time-rich and well-off, of the kind of people who have gentrified Williamsburg and annoyed their parents by becoming cultural-studies lecturers rather than corporate lawyers, who, lacking answers for now, for the weirdness of this era in which the founders of our society hate their founding values, offset everything into the future. They absolve themselves of the key struggle of our time – how to defend freedom and democracy from an establishment that is chipping away at them, from a bourgeoisie that has lost faith in itself – by saying: ‘Those freedoms will never be realised under capitalism anyway. Not really.’ As if they aren’t real. As if they couldn’t be made more real.

This is the thing: anti-capitalism is capitalism. It’s the form capitalism now takes. Self-loathing is the bread and butter of the 21st-century capitalist elite. Today, much anti-capitalism looks less like an independent strike against the elite than an externalisation of the elite’s contempt for its system and values, a colourful playing out of a top-down rot. Last night’s clapping bourgeois worriers over the working class looked to me less like revolutionaries in waiting, than yet more uncritical footsoliders of capitalism’s own self-doubt.

Picture by: Thien, published under a creative commons license.