The Taoiseach who championed censorship

The obits for Liam Cosgrave have glossed over his deep illiberalism. 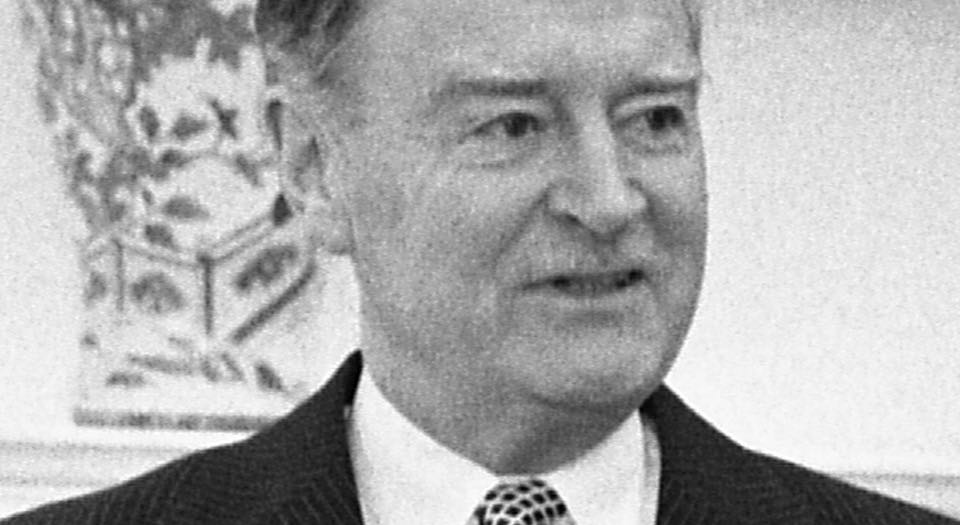 The passing of former Taoiseach Liam Cosgrave last week has led to much praise of his time as leader in the Irish press and beyond. In the Guardian, readers were told he ‘worked with Northern Ireland politicians and the Westminster government to seek a way out of the Troubles’, while the Irish Independent noted he would be ‘chiefly remembered as a staunch defender of Irish constitutional nationalism against serious subversive threats’. In reality, Cosgrave was a barrier to dialogue on the Northern Irish question as a passionate supporter of the Section 31 Broadcasting Act, a draconian piece of legislation which essentially banned voices deemed subversive from the Irish media. Challenged by journalist unions and free-speech campaigners, the act was not only supported by Cosgrave – it was greatly extended in his time in government.

Liam Cosgrave’s career as an Irish parliamentarian spanned decades. He was born in 1920. When he first entered the Irish parliament in 1943, his father, WT Cosgrave, sat alongside him. The first prime minister of the Irish Free State, Cosgrave Sr was synonymous with the ruthless execution policy of the first Irish Executive, stating in the midst of the Irish Civil War that ‘if we have to exterminate ten thousand Republicans, the three million of our people is greater than this ten thousand’. In a speech honouring that legacy decades later, Liam Cosgrave defended the execution policy of his father on the basis that after the extrajudicial executions of four prisoners in Mountjoy no more government TDs (Teachta Dála, Irish MPs) were shot. Shooting TDs was not confined to one side of the Irish Civil War, however, as in its efforts to establish its own school of democracy in Ireland, Cosgrave Sr’s Free State army had earlier machine-gunned Anti-Treaty TD James Devins to death following his surrender in military combat in Sligo.

The first Irish Executive got through the Civil War, bloodied but emboldened, and later waged war on culture, literature and political expression through censorship, overseeing the banning of political publications, undesirable films and more besides. The writer Seán Ó’Faolain, himself a disillusioned veteran of the Irish revolution, was moved to comment on the Ireland that WT Cosgrave and his ilk created: ‘Walls of censorship have been raised to keep out books and films that raise awkward questions. Practically every Irish writer of note has at one time or another been thrown to the lambs.’

Section 31 was first put into action not by Fine Gael, but rather their old Civil War rivals in Fianna Fáil, the party established by Éamon de Valera in 1926. In 1971, Fianna Fáil minister Gerry Collins instructed Ireland’s national broadcaster RTÉ not to broadcast ‘any matter that could be calculated to promote the aims or activities of any organisation which engages in, promotes, encourages or advocates the attaining of any particular objectives by violent means’. RTÉ journalist Kevin O’Kelly was jailed briefly for refusing to identify a voice on a tape seized by Gardaí. The voice was that of Seán MacStiofáin, the chief of staff of the Provisional IRA. O’Kelly was tried before the non-jury Special Criminal Court, and treated with total contempt. After a few days in Mountjoy Prison he was released, but the point had been made, and it was clear that the government was more than willing to imprison journalists.

Two years later, the young Cosgrave led Fine Gael to power, overseeing a coalition government with Labour. From the ranks of the Irish Labour party came the minister for post and telegraphs, Conor Cruise O’Brien, a great contrarian and often brilliant cultural commentator, but a man entrenched in anti-republicanism and a hostility to free speech for those he regarded as morally wrong. Debating Sinn Féin president Tomás MacGiolla before a packed auditorium in Dublin in October 1971, he declared that ‘Sinn Féin is the open, civilian legal expression of a secret and illegal army’.

The Cruiser, as he was known to generations in Irish politics, regarded it as his mission to keep Sinn Féin off the airwaves. A legal political party standing for election to municipal authorities had no place on RTÉ by his logic. With a government minister accusing RTÉ journalists of being little more than ‘political stooges’, the fear of becoming the next Kevin O’Kelly was enough to ensure that journalists were content to toe the line. Brave voices in the National Union of Journalists sporadically attacked the act, insisting in 1987 that Section 31 ‘has helped erode one of the first principles of a healthy democracy – press freedom – and it has damaged the reputation of journalists’.

Under the Cosgrave administration attempts were made to extend the act into print media, something which ultimately failed, though the editor of Sinn Féin newspaper An Phoblacht, Éamonn MacThomais, was twice imprisoned. Cosgrave insisted that his government must have the ’emergency powers necessary to crush the armed conspiracy’.

Cosgrave has been championed for his participation in the Sunningdale Agreement of 1973, an attempt to bring about power sharing in Northern Ireland and to create a cross-border Council of Ireland for areas of mutual concern. A sustained campaign of loyalist violence, including the UVF-orchestrated Dublin and Monaghan bombings in 1974 (the single greatest loss of life on one day in the Irish Troubles, and a day still shrouded in mystery), ultimately brought about the collapse of the agreement. In condemning the UVF’s bombing of Dublin, Cosgrave used his speech in the Dáil to declare that ‘everyone who has practised or preached violence or condoned violence must bear a share of responsibility for today’s outrages’. Morally, it was clear that he and those around him felt that the Provisional IRA bore the blame, the bombing being a reaction to their actions. It was a peculiar logic, but in the Cosgrave administration a rainy day was probably the fault of the IRA, too. His failure to seek a proper enquiry into the events around the Dublin and Monaghan bombings is one part of his legacy.

Beyond his commitment to censorship and the silencing of political opponents, Cosgrave also proved himself an opponent of social progress, famously crossing the floor of the Dáil in 1974 to vote against his own government when the Supreme Court declared the ban on the importation of contraceptives by married persons to be unconstitutional. He was, in the words of writer Paddy Duffy, both ‘dead against the bill, and dead against the pill’. Cosgrave was in poor company, with Oliver J Flanagan TD also crossing the floor. The man who once proclaimed there was no sex in Ireland before television, Flanagan outlined his belief that ‘coupled with the chaotic drinking we have, the singing bars, the side-shows and all-night shows’, allowing Irish people access to condoms ‘would bring the country to its knees’.

Numerous obituaries have proclaimed that Liam Cosgrave was his father’s son, and in many ways he was. Like his father he believed that the state knew what was best for the Irish people, and that freedom of speech and freedom to information was a hindrance to the maintaining of a strong state. Section 31 has thankfully found its place in the dustbin of history, but the desire of successive Irish governments to silence criticism should not be forgotten.

Donal Fallon is a historian and author based in Dublin.