Trouble at the Tate

It’s too big, obsessed with identity politics and run by cultural relativists. 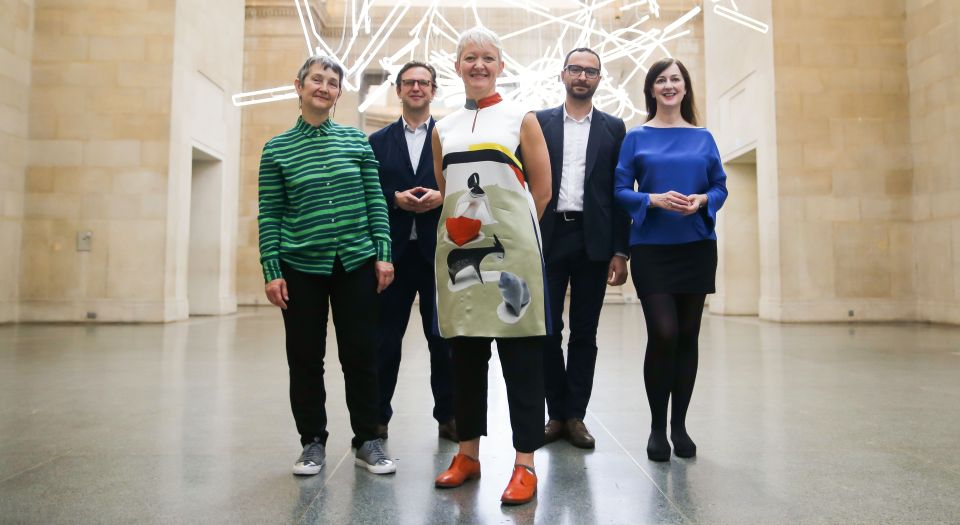 With the opening of a new building adjoining the Tate Modern Bankside site, and the appointment of a new director, Dr Maria Balshaw, things seem buoyant at the Tate. Yet below the surface the organisation is headed towards crisis.

Although you wouldn’t know it from the fawning accolades of newspaper profilers, Balshaw’s appointment alarms art historians. Balshaw, the new director of Britain’s largest fine-art museum, with four venues and £1.3 billion in assets, is not an art historian but a student of literature who attained a doctorate in critical theory, specialising in American authors. Critical theory is an academic branch of postmodernism that, preferring to concentrate on art’s ideological and social role, sees no qualitative difference between high and low (or popular) art forms. This might be a problematic grounding for the director of Britain’s largest collection of high art. Hitherto in her roles as head of the Whitworth and Manchester art galleries, she has demonstrated no detailed understanding of fine art or any willingness to defy fashion, exhibiting and collecting art on an agenda underpinned by identity politics and feminism.

Indeed, Balshaw is a proactive and politically driven individual who will not be taking a backseat position. She has previously made statements that women and minority artists should be given a more prominent position in the arts world. As explained previously on spiked, the relatively low number of female artists in the Tate collection is due to historical restrictions on women artists that no longer exist. However, for feminists, that statistical imbalance justifies the promotion of women artists regardless of the quality of their art.

If the Tate was a stable or manageable organisation, then a figurehead leader would be a viable proposition. Unfortunately, the Tate has huge and ever-increasing problems: it has multiple subjects to cover (British, contemporary and world art); It does too many things (maintaining and expanding a collection, hosting exhibitions, running a website, maintaining four venues and organising education/outreach programmes, publishing, conservation, research, hospitality, retail, fundraising, membership services, publicity and so on); it has too many staff; it has too much art; it must continually increase income; it must continually increase attendance; it is increasingly involved with outside projects and collaboration with outside organisations; it is locked into a politically driven economic cycle where only growth is permitted; and it has recently made a commitment to buy large amounts of art from Africa, Asia and South America.

In the past 28 years, the Tate has acquired over 30,000 new art works. That is a vast amount that the museum will never have space to display. And it is not all acquired for artistic, curatorial reasons; rather, some of that art was acquired as a favour to the artists who are appointed trustees of the Tate board. In fact, the amounts documented in the MPs’ expenses scandal are nothing compared to the huge sums of money being expended by arts organisations such as the Tate, Arts Council, British Council and Government Art Collection on favoured artists. Artists serve on boards, recommending purchases, exhibitions and grants on the understanding they will be favoured in return. For over a decade the independent newsletter The Jackdaw (the Private Eye of the art world) has been documenting these transactions, which are buried in official audits and annual reports. It is clear there is a drive for the Tate to collect art on the basis of the identity of artists not on the intrinsic merits of the art works. The greater the quantity of female/minority art the Tate acquires, the more progressive and inclusive it will appear, which in turn justifies increased government funding. This tendency will only increase in coming years under Balshaw’s direction.

The Tate’s collecting policy is not based on what it will display but on demonstrating its politically progressive credentials, using our money to do so. Due to space restrictions, the art itself will likely never be exhibited.

The Tate’s fundamental problem is that it does not know why it exists; this will only get worse during Balshaw’s era, with its promised blend of identity politics, populism, community events, pop culture and an influx of school parties, not to mention a massive acquisition drive.

Museums in the postmodern age

When the existence of museums depends on popular consent and museum funding depends on reaching a mass audience, curators tend to make art as approachable as possible. Yet the more art is presented as just another piece of everyday life, the more people wonder what the purpose of an art museum is. Making art more popular by adapting it to ape pop culture (or by co-opting pop culture as art) increases engagement, but decreases respect towards art. Pop culture in museums cannot help but be a feeble denatured mimicry of the pop culture that fills the rest of the world.

In a postmodern multicultural age, cultural institutions lose morale and direction because they have no moral or intellectual underpinning. If museum staff do not believe fine art has intrinsic value as art (not just as a demographic signifier) then they cannot explain art. If even experts cannot explain why art is important, they (and their museums) deserve to go. Balshaw is an arts-venue manager who has demonstrated little knowledge of art history and is therefore in the worst possible position to put forward an intellectual and moral case for high art.

Arts-venue managers (as opposed to art historians, who used to run museums) are terrified of silent static art, of allowing visitors to choose to engage or walk away, and – like an anxious mother with an easily bored child – chop art into tiny morsels without context or jangle bright geegaws such as ‘interactive experiences’ to capture attention. But that is exactly what everyone experiences elsewhere all the time.

But surely those morsels entice visitors to learn more? Really? In a chaotic museum that cannot properly display that art, label it informatively or explain why it is important? Showing films, staging concerts, hosting performances, holding lectures, providing educational activities – all of these are done better, cheaper and smarter by cinemas, private galleries, concert halls and schools with facilities adapted to those purposes and staffed by professionals who are experts. The only thing an art museum does better than any other venue is displaying painting and sculpture. It could almost have been designed for that purpose.

The Tate is so intent on being second-rate in as many areas as possible, it neglects its core mission. A museum such as the Tate should conserve, present and explain art objects of the highest aesthetic quality and historical worth. Clarity, focus and excellence – and the respect that would generate – would secure the future for a slimmed-down Tate. But the circus must go. Exhibiting and collecting a cross-section of the entirety of the world’s high and pop culture in its myriad manifestations in a museum barely capable of presenting its limited collection of British and Western Modernist art up to 1970 is not only impossible; it is insanity.

The drive to make high art a mass viewing activity is motivated by curatorial self-interest, cultural insecurity and financial necessity. It is not viable. If a museum has (due to poor decision-making) an unmanageably vast collection and an enormous number of staff and consequently locks itself into an unsustainable counter-productive cycle of performance targets to attain ever greater income simply to survive, then it deserves to fail.

Identity politics at the Tate

From the statements of Balshaw, her track-record at the Whitworth Art Gallery and the Tate’s recent policies, we can guess that her tenure will be marked by three aims: a) a drive to increase levels of attendance; b) attempting to alter visitor demographics, and; c) altering the demographics of artists represented. Here are some predictions:

1) The Collection and exhibition of art will be increasingly driven by the imperative to promote female/minority artists regardless of the aesthetic or formal qualities of their art. There will be a drive to pack the collection with art by women/minorities in an attempt to reach arbitrary statistical targets. The contemporary collection will become a massive, ever-inflating, multi-million-pound experiment in social engineering grounded on untested principles, driven by ideology and set to utilitarian goals: to demonstrate virtue and make visitors virtuous.

2) As in all politically driven economies that prioritise production and performance targets (centralised national economies, educational and health-care systems, etc), there will be an increasing tendency to distort, partially report and fabricate figures to suggest increased attendance and greater consumption of art by minorities and the poor. Targets will be altered and definitions manipulated to compensate for poor results.

3) There will be an increase in the practice of piggybacking shows of lesser known female/minority artists on to shows of more popular artists, regardless of whether the linkage is artistically/aesthetically appropriate. Attendees of Tate Liverpool’s exhibition of Leonora Carrington will remember a neighbouring room devoted to Cathy Wilkes. Both exhibitions were on the same ticket. Many visitors, seeing a room filled with contemporary art unrelated to Carrington, did not even enter the Wilkes room. However, Tate reports attendance of the Wilkes and Carrington shows as equal.

4) Space devoted to historical (pre-modern) art in Tate Britain will be steadily reduced. Presentations of historical art will increasingly disregard art-historical standards. Curatorial staff and financial resources will be redirected towards contemporary art. Departing staff who handled pre-modern art will not be automatically replaced.

5) Interpretative texts will reduce discussion of stylistic aspects and highlight the social dimensions of art. In an attempt to make texts as accessible as possible, they will be simplified to a degree that errors will become frequent, undetected by staff who will be under-informed about art history.

6) The Turner Prize will become an award driven by political ideology. Winners will be politically focussed; collectives will win more often; women/minority artists will dominate shortlists and lists of winners; and painting will only be included if it is driven by political concerns. Critical commentaries on the Turner Prize produced by the Tate will neglect aesthetic discussion.

I have no personal animosity towards Balshaw. Certainly, anyone who has run a large arts venue financially successfully has admirable abilities. However, anyone whose approach to leadership is essentially managerial, whose principles are informed by identity politics and postmodernism, who has no apparent belief in the functions and value of high art (distinct from pop culture) and who cannot identify or defend the core mission of a national art collection will only make worse the situation at an already unwieldy, dysfunctional organisation. Instead of being the Tate’s most suitable fundraising director, Balshaw may, sadly, be the Tate’s least suitable director.

This is a reduced form of the long essay ‘New Order’ available in the current printed issue The Jackdaw (September 2017), available to order here: thejackdaw.co.uk