The implosion of the German political class

The rise of AfD confirms the upending of politics as we knew it. 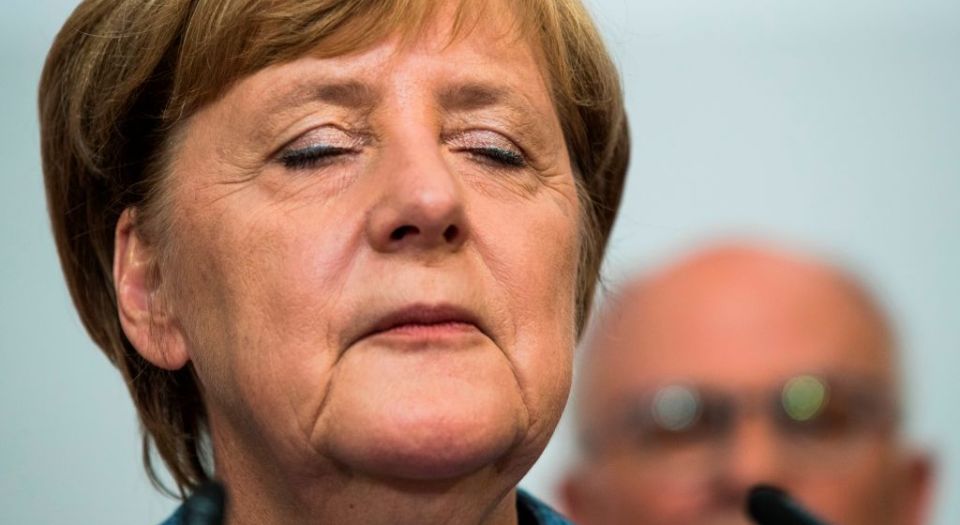 If the election results in Germany confirm anything, it’s this: the postwar political order is continuing to unravel. Yes, Angela Merkel’s ruling Christian Democratic Union (CDU) has won the General Election. But it has incurred huge losses in doing so. Its vote fell by 8.6 per cent to 33 per cent – its worst result since 1949. The situation is even more serious for the Social Democratic Party (SPD). It was part of Germany’s coalition government, and its leader Martin Schulz had briefly hoped to oust Merkel. But, with just 20.5 per cent of the vote, it recorded its worst result ever.

Instead of ensuring continuity and stability – the two plinths on which Merkel built her campaign – the election results have left the German political scene looking very uncertain and unstable. This is mainly due to the success of the largely anti-immigrant party, Alternative for Germany (AfD). With 13 per cent of the vote, it has become the third largest party and will join the German Bundestag for the first time.

AfD’s success has resulted in much handwringing. Many brand the party racist and fascist, and claim it brings shame on the nation. It was no surprise to hear groups of demonstrators outside AfD’s Berlin headquarters chanting anti-fascist slogans as the results came in.

But the principal reason for the rise of AfD is not a rise in fascist sentiment among Germans. Rather, AfD owes its success to the decline of the old parties. Initial analyses have shown that 1,070,000 votes for AfD came not from neo-Nazis, but from disgruntled CDU voters. That is why author and sociologist Michael Rutschky refers to AfD as an ‘exiled CDU’, pointing out that many of the positions held by AfD were once held by the more right-wing sections of the CDU (such as a strict anti-immigration stance). As leader of the CDU, Merkel’s rejection of what Rutschky calls the CDU’s old German-National position infuriated and estranged segments of the CDU’s support base, and provided AfD with a readymade source of support.

But disillusioned CDU voters alone cannot account for the immense success of AfD. Its other considerable source of support came from the collapse of another member of the political establishment, the SPD. Analyses show that the majority of AfD voters (1,280,000 in total) were former non-voters (meaning those who didn’t vote in the 2013 General Election) who would once have voted for the SPD. This is no longer the case. In fact, in this election, the SPD lost another 500,000 votes directly to the AfD. Moreover, as a party that historically might have been expected to win support from the working class, the SPD’s current voter demographic is telling: only 24 per cent of all workers voted for the SPD.

What was once called the ‘people’s party’ (Volkspartei) appears to be on its last legs. The pressure has clearly told on Schulz, who reacted aggressively throughout Sunday evening’s traditional televised post-election debates, claiming Merkel had brought about the rise of AfD by leading a ‘scandalous election campaign’ and ‘systematically [refusing] to talk about politics’. So unhinged and defensive was Schulz’s latest TV performance that German newspapers suggested he had ‘freaked out’.

AfD is not the only party to have gained from the decline of the political establishment. For the first time in postwar history, the Bundestag will feature six parties, including: the Liberal Party (FDP), which managed a splendid comeback with 10.7 per cent (after failing the quorum at the 2013 elections); the Left Party (Die Linke), with 9.1 per cent; and the Greens with nine per cent.

Still, given many of these smaller parties can count on some of their traditional supporters (the Greens and the Liberals have a stable, middle-class voter base), it is AfD that seems to have become the party of protest. Hence surveys for ARD, a German TV channel, suggest that the vast majority of AfD voters don’t identify with the party very much at all, with 55 per cent demanding that it distance itself more from right-wing positions, and 85 per cent saying voting AfD was the only way in which their protest could be expressed.

The fall of the CDU and the SPD is hardly unexpected. For too long, they have combined a technocratic, managerial approach to politics with incompetence in government. Polls showed that AfD voters were most concerned about rising crime rates and immigration, two issues which Merkel’s government struggled to tackle. Instead of facing up to such social and political challenges during the election campaign, the party-political establishment preferred to downplay problems, claiming, for example, that hundreds of thousands of refugees could be effortlessly integrated into the workforce or that crime rates were not really rising. The CDU coupled this with unconvincing attempts to emulate the rhetoric of AfD, without addressing the underlying issues, such as housing shortages, integration problems and so on. Right from the start, the CDU and SPD failed to hold an honest open debate and trust people to form their own judgements.

Their mutual election strategy of avoiding debate and building on fears of ‘populism’ has failed. The success of AfD is nothing to celebrate, but we should see it as the product of the CDU’s and SPD’s inability to address voters’ concerns. ‘For a Germany in which we all live well and happily’, was Merkel’s campaign message. We should demand far more from politics than shallow slogans and empty platitudes about being happy.