Treasures From the Wreck of the Unbelievable is a powerful exhibition. 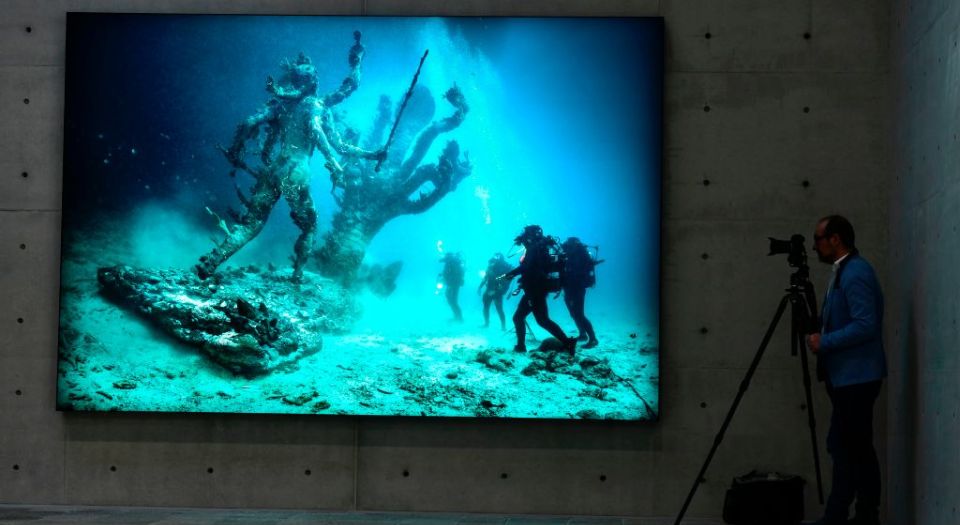 At the top of the Giants’ Staircase, the traditional entrance to the Doge’s Palace in Venice, stand enormous statues of Mars and Neptune, together representing Venice’s power on land and sea.

Once inside the palace and climbing the Golden Staircase – as visiting ambassadors and dignitaries would have done in centuries past – you’ll be regaled with paintings of gods and myths called into service to represent key moments in Venetian history. For example, a painting of Venus, the beautiful woman born of sea-foam, represents Venice’s acquisition of Cyprus in 1489.

Continue through the magnificent rooms that were used for various parts of the Venetian government and you’ll see assorted Doges (Venice’s most senior elected official) painted side-by-side with religious symbols.

Doge Antonio Grimani Kneeling Before the Faith, by Titian, 1575-76.

Myth in the service of myth. Ancient stories from the past used to sum up what we stand for in the present – it is a theme that surrounds you as you wander Venice (1). All of which makes it perhaps the only city that Damien Hirst could have chosen to mount his most ambitious exhibition to date.

Some of it is easy. We’re treated to a gentle satire on the nature of what the modern museum sees as significant – another room full of coins?; more swords and helmets? – as well as a perfectly constructed send-up of the now mandatory computerised touch display, with which real, live visitors can zoom and pinch and swipe their way through screens showing the exact locations of non-existent artefacts in a non-existent boat.

But once you get past the mockery of museums, collectors and artists, Hirst included, Treasures From the Wreck starts to get tricky. And much more interesting.

Beyond the jokes and digs at the value of art, the essential feeling is one of flip-flopping forwards and backwards within the artificial world that Hirst has created. And as with any stimulating exhibition, you frequently find yourself flip-flopped back to the real world.

This is illustrated perfectly by the enormous statue that fills the atrium at the Palazzo Grassi. It is over 18 metres tall, and purports to be a larger copy of a smaller relic found in the shipwreck. In turn, we see that the relic is an almost exact copy, sans head, of William Blake’s painting The Ghost of a Flea, in which Blake imagined a flea’s ghost to be human-sized. And now Hirst has imagined the human-sized flea’s ghost to be size of a three-storey house. Flip, flop. Backwards, forwards.

Perhaps Hirst’s most ambitious provocation relates to time. Take his scary reimagining of Cronos shown devouring his children. As the caption to the work points out: ‘For generations of artists, including Goya, Carpeaux and Rodin, Ugolino/Cronos became a symbol of both the forces of chaos, and the repercussions of acting contrary to nature.’ But the Cronos we see here is unmistakably in the style of the Chapman Brothers, themselves famously locked in a love-hate relationship with Goya.

So in Hirst’s world, the present is now somehow preceding the past, or perhaps the past is influenced by the present. Backwards and forwards. Flip. Flop. Tick. Tock.

And the cumulative effect of seeing many pieces that play with origin, time and influence is that you begin to wonder if the idea of the past being wrapped up in the present may not be so outlandish. After all, ancient artefacts can appear to have a continuity with present ones simply because their creators are dealing with the same eternal questions.

The effect of being bombarded with so many fake items made in the present, claiming to be from the past, is to be reminded that humans have always tried to explain the world, and we’ve always looked for something to believe in, in the absence of knowledge.

And the Möbius strip is closed when Hirst makes us think of the future; after all, by creating a fictional account of the discovery of 2,000-year-old items that purport to tell us about our ancestors, he is posing the question of what will our descendants, 2,000 years hence, think of the artefacts we leave behind.

The effect of filling two museums with artefacts and storylines that are all ‘unbelievable’ is not, as some reviews have it, to create a post-truth exhibition in which anything can be true because nothing is true. Instead it conjures up the variety of things that people have believed in, and makes us ponder what we believe in now.

In the final rooms, Treasures From the Wreck reaches a crescendo as we see that far from believing in nothing, people ‘believe in’ abundance (which is now, according to the guide, placed on a pedestal and admired ‘for its aesthetic qualities rather than ritual function’); in science (a giant mouse with an ear on its back nibbles at the giant toe of Apollo); in the body (tattoos and hermaphrodites); celebrity (the ‘Unknown Pharaoh’ is a well-known Pharrell); and, at the last, in God, represented by ‘Hands in Prayer’, a sculpture uniting Hirst and Dürer in a common quest.

In a 2011 interview Hirst said that ‘[e]very single artwork ever made is a celebration of something. You’ve got to find a reason to live against adversity in the world. As a species, we need to find hope wherever we can.’ And his latest exhibition reminds us that there are plenty of places to look.

Mark Birbeck is a writer based in London.

Treasures From the Wreck of the Unbelievable is at the Palazzo Grassi, Venice, until 3 December 2017.

(1) For a lively and detailed account of the role of myth in how Venice understands its past and present, see Venice in Environmental Peril? by Dominic Standish, University Press of America, 2011.