Both the alt- right and left are engaging in moronic behaviour. 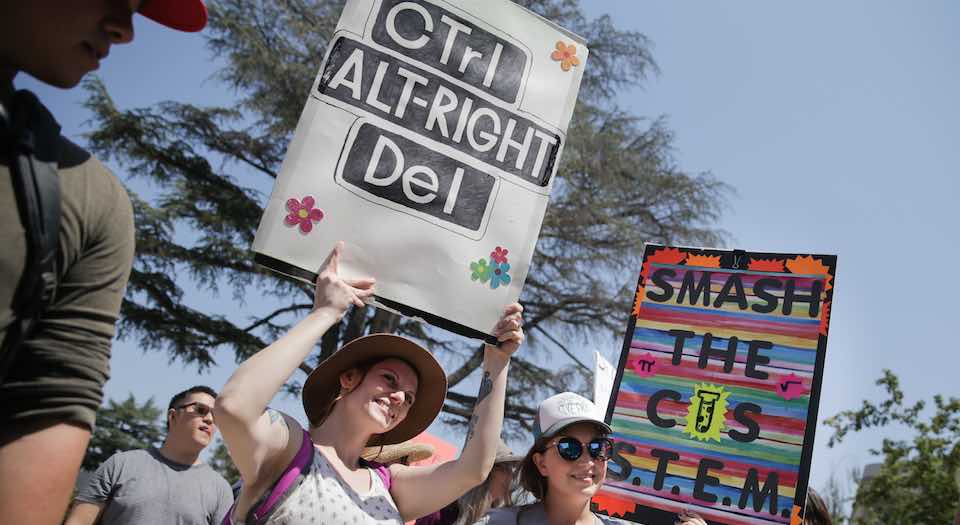 There is some debate as to whether we can conceivably talk about the ‘alt-left’. Does the term have any meaning? Is it but a sly invention of the alt-right in order to reduce its opponents to a level moral footing – as if to say ‘you’re no better than us’?

The term certainly enrages those on the activist left, who regard themselves as championing the poor, marginalised, women and ethnic minorities against the behemoths of ravaging neoliberalist economics and white privilege. There could be no possible moral equivalence between such noble characters and the creepy, brutal voices of neo-Nazism, elitism and white nationalism. Surely?

Surely indeed. Events this summer suggest that the term ‘alt-left’ is justified – that is to say, if the prefix ‘alt’ denotes sulky, rancorous, childish thuggery. This is the year that some sections of the left lost all pretence to holding the moral high ground. The alt-left has become ideologically fanatic, with its lust for instability now clear to behold.

The most obvious manifestation of its evolution into a febrile cult is its new mania for iconoclasm. Remember at the beginning of the 2000s, when we were horrified at the Taliban for blowing up ancient statues? Yet 16th-century-style statue-smashing has become mainstream in the US, as the alt-left has cultivated a craze for pulling down inanimate representations of people.

It began on campus in regards to statues of patrons who didn’t live morally spotless lives, but this summer spread to Confederate war figures. A statue of Thomas Jefferson at the University of Virginia is now being threatened, a Columbus statue in Baltimore has been vandalised, and there has been talk this week of pulling down Nelson’s column in London.

There is something deeply sinister about this Khmer Rougesque desire to erase the past. But we are indeed witnessing the gestation of something akin to a Year Zero outlook among the alt-left. It’s not just its discourse that openly celebrates violence – ‘Kill White People’ and ‘Kill Cops’ are slogans designed to inflame vengeful passions among the righteous. It’s not just its brutalistic adulation of street activism, as so beloved of Black Lives Matter and Antifa. No, the profoundly terrifying aspect of the alt-left is its religious-like desire for moral and mental purity.

The alt-left seeks hygiene of the mind. It wants to expel undesirables. It wants to cleanse and protect minds with trigger warnings, Safe Spaces, No Platforming and censorship. It sees free speech as dangerous because it allows freedom of thought. The alt-left has consequently developed a Manichean mindset. One routinely hears rhetoric of ‘you are either with us or against us’, as the alt-left increasingly directs its ire at ‘centrist fence-sitters’. This is the language of Stalin.

It’s thus quite easy to talk of the alt-left, and of it being just as bad as the alt-right. Each other is of moral equivalence, in that each is peopled by intolerant, toy-smashing tosspots. But events this year have started to make me believe that the alt-left is possibly even worse.

The voodoo law of hate crime

When I did jury service last year, I was impressed at the emphasis placed on hard evidence and impartiality. That was serious, grown-up law in action. Hate-crime legislation, on the other hand, is voodoo law, where everything is determined not impartially, but by the victim, and evidence is jettisoned in favour of perception. Someone accused of a hate crime literally can’t refute any accusation made against him or her, because you can’t refute a perception or prove a perception to be untrue. This is witchcraft law. Social media is a minefield of perceived slights, where not getting a retweet could constitute a hate crime. Does the CPS really know what it’s doing?

The moment might have been preceded by a clamorous, week-long ding-dong, but on midday on Tuesday, after a final 12 ominous dongs, Big Ben finally fell silent. We shall not hear its kind for four, long, long, long years.

They had come from the four corners of the Kingdom to witness this event. How the multitude thronged. Some in celebration. Some in lamentation. ‘It’s just a fucking clock!’, remarked someone I spoke to. ‘I hope in our hearts that when the sodding bell returns we might have realised how ridiculous we look for giving a toss.’ This was Mungo Krankenhaus, 49, of Peckham, south London: ‘I came here really to cheer the silencing of tawdry relic, a systemic symbol of chilling neo-liberal injustice and Brexit triumphalism. For as long as its bell chimed, Britain was on the wrong side of history. Perhaps now Britain will be on the right side of history.’

Miranda Kalashnikov, 26, who travelled from Bristol, was broadly in agreement. ‘This is 2017, and there’s no room for a building that gives such judgemental tolls. Why does “Big” Ben feel the need to boast that he knows the time, according to his Western form of time keeping? It’s pathetic. Talk about manspreading and everyday sexism!’

Others were in attendance more in sympathy than anger. ‘It is such a memorable structure that Hitler tried to flatten it and, if ISIS ever landed on our shores, Big Ben would be the first thing they would blow up’, said Hamish Oliphant, 56, of Blairgowrie, Perthshire. ‘Those who seek to silence the chimes of Big Ben know what they are doing. They see the chimes as part of the national fabric of a country they no longer wish us to be part of.’