The left’s fear of neo-Nazism has become a McCarthyite moral panic. 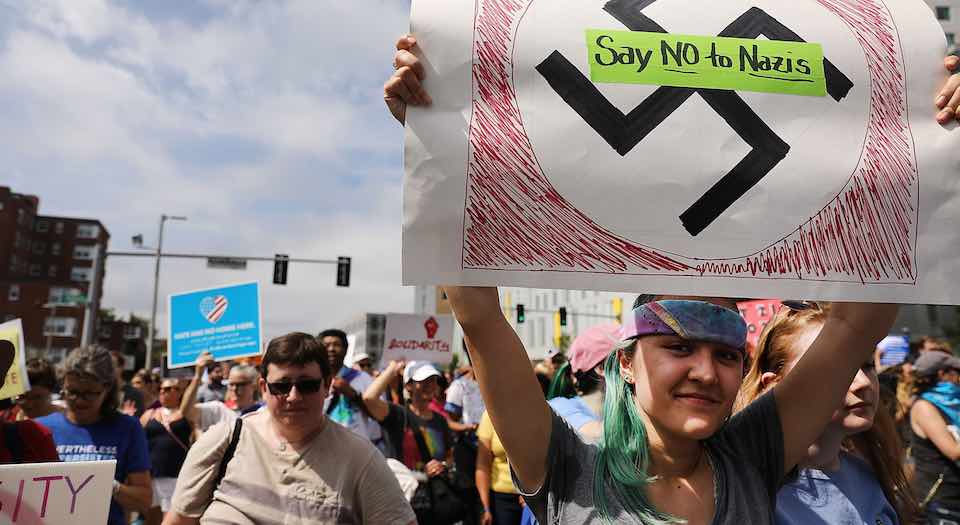 To see how unhinged the fear of fascism has become, look no further than the 40,000-strong counter-protest against the far right in Boston on Saturday. In their thousands, placard-ready, primed for a fight, so-called progressives showed up to face down white supremacy and America’s resurgent Hitlerism that we’ve heard so much about since the Charlottesville disturbances on 12 August. They ‘turned out against white supremacy’, said Vice. But there were no white supremacists. Far less fascists. The Nazis who stalk the nightmares of ostensibly liberal columnists and leftists in search of a mission were not there, or anywhere. As one counter-protester asked a Boston Globe reporter: ‘Excuse me, where are the white supremacists?’

‘Where are the white supremacists?’ — this is the question of our age, if we are honest. This is not to say white-supremacist groups do not exist. Of course they do. But they are small and uninfluential. They do not swarm the streets in the way they did in the dark past. Their ideology is widely disparaged, everywhere from schools to universities to the political sphere. Neo-Nazis are even more minuscule, as images from Charlottesville will attest: it would take a huge leap of the imagination, an abandonment of rational analysis in preference for the comfort of post-truth certainty, to believe Charlottesville’s handful of hillbillies who read a few pages of Mein Kampf when their wives left them are a threat to anything. The return of fascism is a fantasy. The far right has material existence, yes, but the far-right threat is a phantasm of the modern media’s making. It is a moral panic, and a dangerous one.

The ‘white supremacist’ gathering in Boston was in truth a small protest in favour of freedom of speech. As Jeff Jacoby wrote in the Boston Globe, where the media and thousands of counter-protesters demonised these free-speech agitators as ‘a troupe of neo-Nazis prepared to reprise the horror that had erupted in Charlottesville’, they were in fact a ‘couple of dozen courteous people linked by little more than a commitment to — surprise! — free speech’. So there was an anti-Nazi protest against non-existent Nazis. An anti-fascist march without any fascists to be anti about. This vast demonstration against a phantasm of the increasingly febrile media’s making was a powerful snapshot of the politics of fear over the far right; of the disconnect between what liberals say about Nazism — it’s coming back, it’s the 1930s again, etc — and the reality: the far right is tiny and tragic.

Such is the McCarthy-like panic over the far right — only now we fear there are brownshirts rather than reds under the bed — that the media shamelessly make things up and innocent people have been attacked on the suspicion that they’re fascists. This week the UK Independent and other publications shock-titillated readers with the revelation that ‘22million Americans support neo-Nazis’. This is a lie, or, charitably, a distortion. It is based on a Washington Post / ABC poll that found that a sizeable minority of Americans think it is ‘acceptable to hold’ white-supremacist views. This is not necessarily support for such views; it is support for the right to hold them. Post-Charlottesville, innocents have been attacked after people wrongly thought they recognised them from photos of that far-right gathering. One young man, Joshua Witt, was stabbed by an ‘anti-fascist’ on the basis that he had a ‘Nazi haircut’.

There’s hysteria here. If you are marching in your thousands against a Nazi gathering that has no Nazis, or piling on against people who merely look like someone who went to the Charlottesville demo, or attacking individuals on the basis of their hair, then you’ve left the realm of serious debate and crossed the line into blind fear, moral incoherence, fantasy. The daily media and political handwringing over resurgent Nazism, with respectable newspapers telling us we are witnessing a ‘global march of fascism’, bears no relationship to reality. That this overblown, violence-inducing panic is being stirred up by those who complain about the post-Brexit propulsion of the West into a ‘post-truth’ era is an irony that should be lost on no one. Right now, there’s nothing more post-truth than the idea that fascism has returned to the West.

There are many reasons this fascism delusion has taken hold. The media class, disorientated by Brexit and Trump, needs a bogeyman to rail against, a thing to blame, and it has happened upon the far right — or at least its own fact-lite dream of the far right. Pro-EU and Hillary supporters likewise need something to pin their failings on, to explain away the public’s turn against them. ‘Resurgent Nazism’ is their excuse-making, their explanation for why ordinary people rejected their narrow agenda. And the left needs a new focus. Disconnected from, even untrusting of, ordinary people, feeling at-sea in this era of populist revolt, caught between a state it trusts and a populace it doesn’t, it longs for a simple outlet for its political energy. Step forward Nazism, or invented Nazism. The far-right moral panic grows in direct proportion to the left’s loss of purpose.

But the key dynamic to this panic is so-called progressives’ internalisation of the bourgeoisie’s crisis of legitimacy. A Western political class horrified by the populace’s rejection of its expertise, outraged by the public’s ballot-box revolt against its deathly diktats and baleful bureaucratism, requires a foil. And for years, right from the founding of the EU in the early 1990s to the Brexit revolt last year, its foil has been xenophobia, demagoguery, the idea that such phenomena have a perverse stranglehold over the little people’s minds. That is its explanation for everything that doesn’t go its way, from the revolts against the EU Constitution in 2005 to the failings of Hillary and other liberal politicians today. Each time we’ve been told that people have fallen into the trap of racism, of hate, of irrationalism; they have become victims of the far-right virus. This is an invented spectre, from a political elite that thinks anyone who turns against it must have been ‘got at’.

This is what is so tragic about ‘antifa’ and other sections of society that have devoted themselves to the cause of facing down 21st-century ‘fascism’: they think they are being radical when in truth they are the footsoldiers of an ideology of declinism written by an elite sore at its losses and stung by defeats. These people might have welcomed the democratic bloody nose that the masses delivered to the technocratic elite, but instead they embraced that elite’s false claim that this bloody nose was the handiwork of hate and prejudice. Instead of siding with the ballot-box revolters, they sided with an establishment that painted these revolts as fascism resurgent. For shame. This might prove to be the modern left’s worst mistake, this nodding along with the lie that a democratic cry was in fact a fascistic screech.