The liquidation of history

Why we should oppose the destruction of Confederate statues. 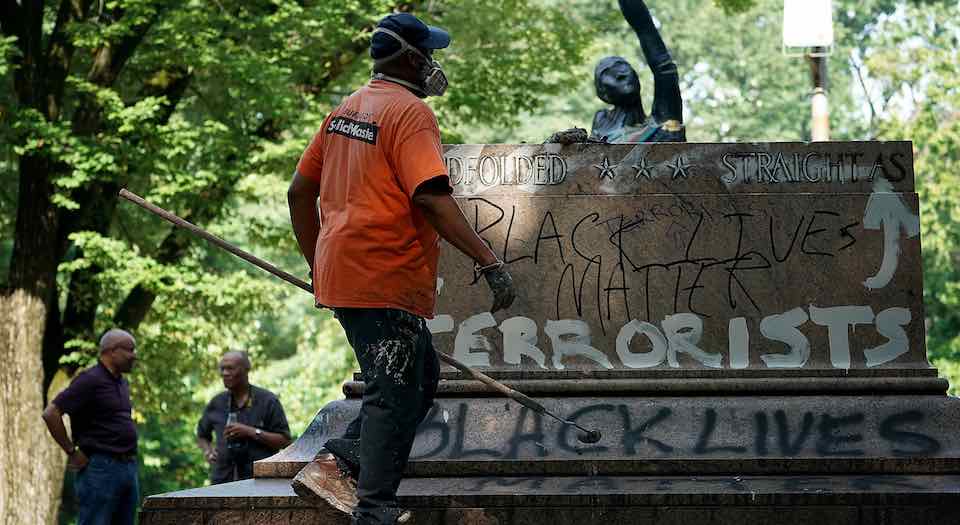 One day after a bloody clash between white supremacists and a mixture of non-violent, anti-fascist marchers and violent antifa activists in Charlottesville, Virginia, a mob of activists destroyed a Confederate war statue in Durham, North Carolina. Fearing more violent action, authorities are concealing or removing potentially controversial public monuments nationwide. Far from easing tensions, this is likely to worsen the situation.

From South Africa to Ukraine, statues have become proxy targets for political violence. Statues are soft targets. Often unprotected, easy to deface or destroy and unable to retaliate, they make ideal symbolic targets for those unwilling to endanger themselves. In an age when groups can be quickly mobilised via social-media postings and attacks can be livestreamed around the world, such assaults on cultural property are liable to become more common. Police rarely intervene, prosecutions for these attacks are uncommon and punishment light.

Now the Culture Wars in the US are being fought on the streets between left-wing and right-wing activists. Civil War statues and memorials are flashpoints for this conflict.

Whatever the sensitivities around the American Civil War, if offended parties take the law into their own hands by destroying property with impunity, then tit-for-tat attacks will increase and more blood will be spilled. Civil society depends on common agreement to respect shared cultural heritage regardless of whether one participates in specific activities or approves of all symbols. We must not damage or steal public property in the same way that we must not do so with private property.

A majority of Americans think Confederate memorials should be preserved as historical monuments. The interpretation of monuments is a matter for society at large and for individuals. To suppress all representations of the Confederacy is an act of revenge and a distortion not only of the Civil War itself but of the legacy it left, including the lingering pride and grief of the losing side. Destruction of memorials is an attempt to suppress memory and even dissent. It says that the feelings and principles of a minority (those today who are pro-Confederacy) are not only immoral — they are unworthy of consideration or even of examination.

The casting of an opposing side as less human is a common tactic of authoritarian regimes of left and right. It induces a conception of false moral clarity. ‘I condemn that side; only evil/damaged people could have supported that side; I could never support it and never would have in the past; I am free of delusion and fault; I act now with absolute moral authority.’ Such thinking denies our own fallibility, the moral weaknesses of others and the conflicting loyalties and complex situations which led people to suffer and die for causes they felt ambivalent towards. Such thinking is fundamentally untruthful about human nature, curtails empathy, promotes intolerance, and encourages the taking of extreme positions and actions.

Even if every Confederate flag were removed from public spaces and every war memorial dismantled, the drive to liquidate history will continue. Success will only encourage further punitive action against other targets. There are calls for monuments to George Washington to be removed because he was a slave-owner. This ignores the fact that slave-owning, while morally unjustifiable, was both commonplace and legal in that era. The motivation is to satisfy the urge of today’s activists to exact retrospective righteous vengeance. The fact that even founders of the United States are being targeted in such a way shows the mindset of activists. The identarian/social-justice movement is an ideological one dedicated to dismantling many aspects of society and removing obstacles to the enactment of its goals.

Advocates of identity politics present themselves as helpless and injured by trauma in order to gain political advantage. They are helped by well-meaning but gullible moderates who believe that by acceding to such demands they are easing suffering. Quite the reverse: concessions simply encourage identarians to make further claims, destroy more cultural heritage, suppress more oppositional speech, and target more individuals who oppose them. It reduces public discourse to emotional grandstanding – insincere at that. If one’s main means of effecting social change is being strategically offended or upset (often on someone else’s behalf), then one persists in such behaviour when it is rewarded. Demonstrating offence or emotional trauma – effectively infantalising oneself – is a strategy; combined with harassment of individuals, this strategy is one which is reaping rich rewards.

In any revolution, an extremist find the status quo unacceptable. Standing still is indefensible. The need to purge both opponents and rivals leads to an ever-narrowing purity spiral. In the current American situation, concessions will not heal the rift — they will stimulate further acts of historical revenge and entrench camps into opposing groups, not least because compromise on historical monuments tends to favour the so-called left in modern America. The next stages are renaming of places and institutions, changing symbols, removal and destruction of cultural items (including art), and suppression of writing and speech.