An Orwellian war on the past

The control of public space is an attempt to control thinking itself. 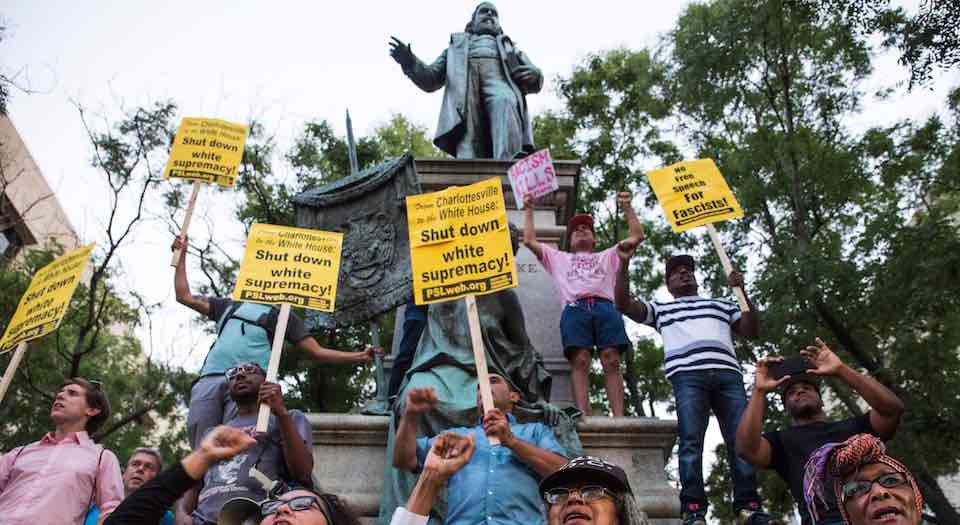 Everyone’s smashing statues. From ISIS hotheads sledgehammering ancient artefacts in old Mesopotamian cities to plummy students at Oxford demanding the removal of busts of old colonialists, waging war on the past is all the rage.

A Year Zero mentality is on the march. People seem hellbent on wiping out history, making it invisible, and starting society all over again, cleansed of the likenesses of dead people of whom they disapprove.

This fury against monuments is presented as good and radical. The statue-smashers say they simply want to erase the faces and names of people who did bad things to show how far society has progressed and to make minority groups feel more comfortable when they’re out in public.

In truth, there’s nothing good in this mob-like erasure of history. It’s a reactionary, even Orwellian, movement. The urge to ethically cleanse public life of ‘bad history’, to shove down the memory hole any bust or tribute to past folk whose values make us bristle today, is intolerant, illiberal and profoundly paternalistic.

During the past week, the irrational fury against inanimate objects moved up a gear. First, there were the disturbances in Charlottesville, Virginia, when disagreements over a statue of Confederate general Robert E Lee descended into violent clashes between leftists and neo-fascists.

A couple of days later, protesters in North Carolina tied rope around the neck of a statue of a Confederate soldier and dragged it down. They kicked and spat on it. There was a weird intensity to their statue abuse, bringing to mind the wide-eyed fury of Islamic State agitators as they stamp on what they view as idolatrous historic carvings in the ancient cities of Palmyra and Nimrud.

Then, in an extraordinary move, the mayor of Baltimore, Maryland, ordered the removal of four Confederate statues in the city. In the dead of night, workmen dragged them down. What had been everyday monuments for decades, seen by people as they walked to work or went for a jog, suddenly were viewed as a poisonous presence, liable to harm people’s self-esteem and the city’s stability. And so they were memory-holed, in the black of night, exposing the febrile streak to this statuephobia.

Year Zero agitation has been gaining ground for a few years. Students at Oxford want a bust of old British colonialist Cecil Rhodes removed. They describe the statue as ‘problematic’, a word PC zealots use in the same way Islamists say ‘haram’: to indicate something is wicked and should ideally be extinguished.

One of the protesters against Rhodes says, ‘There is a violence in having to walk past the statue every day’. There’s a medieval feel to this, this idea that even things made of stone have great power and evil in them. For an Oxford student to describe a statue as an act of violence really is similar to ISIS hammer-wielders’ belief that pre-Islamic icons have the power to pollute men’s souls and thus must be destroyed.

Anyone who thinks this policing of the past will stop once all statues of Confederates and colonialists have been knocked down is in for a shock.

In the US, the Year Zero mob has turned its sights to statues of the great Thomas Jefferson (he owned slaves). And this week Yarra Council in Melbourne decreed that it would no longer refer to 26 January as Australia Day, out of respect for Aboriginal and Torres Strait Islander people.

So a historic fact – the arrival of the First Fleet into New South Wales in 1788, the basis of Australia Day – is made unmentionable. It’s unremembered, erased, as surely as Winston Smith in Nineteen Eighty-Four must erase old newspaper reports about events that now embarrass the party. Today’s cleansing of images of history smacks of the dark antics of that fictional Ministry of Truth.

The history erasers claim they only want to show how fair our societies now are. Rubbish. This isn’t about making the present better, it’s a projection of political correctness into the past. It’s the punishment of historical figures – even good historical figures, such as Jefferson, and good historical events, such as the settlement of Australia – for not sharing our exact modern world view.

And it reeks of PC paternalism. The warriors against inanimate tributes like to compare themselves with Eastern Europeans who toppled statues of Stalin after the tumultuous events of 1989, or even with America’s own revolutionaries, who pulled down statues of George III when they defeated colonial rule. But there is a vast difference between the removal of old symbols of power by mass movements that have seized power for themselves, and which intend radically to change society, and today’s imbuing of stone objects with menace and the ability to ‘hurt’ people. The former is radical political action, the latter is the cleansing of public life to the end of stroking the presumed weak self-esteem of certain groups. The former is an expression of strength, the latter is craven self-infantilisation.

Indeed, the idea that minority groups can’t cope with seeing statues of dead people who did some dodgy things is an affront to their intelligence and autonomy. It makes children of them, suggesting they will feel physically wounded by images they don’t like, by history itself. After all, ‘there is a violence’ to these statues.

It’s disturbingly ironic: this treatment of certain groups as fragile, as needing to have public life sanitised on their behalf in the way a new mum might baby-proof her home, is riddled with racist assumptions of its own.

One of the great things about public life is that it’s a patchwork of the historical events that made our nations. Take a walk through a city and you’ll see statues of soldiers, politicians, authors, suffragettes and others who shaped our societies. And most of them will have held views or done things we would consider questionable in 2017. So what? The point is they made history, and it’s right for the public sphere to reflect that.

The logic of the Year Zero crew is that we should see only historical figures they approve of (if there are any). They police history with an eye for policing what we citizens can see and by extension think about the societies we live in. Their erasure of certain icons and busts is really an instruction to us, the people, as to how we ought to think about the past, and the present, too. It’s an intolerant imposition of ‘correct’ historical and political thinking. It’s a low, brutal form of censorship, and we should have no truck with it.

A version of this article was published in The Australian on 19 August 2017.