The hysteria over Russia is hurting democracy

When it comes to Russia, Trump is often more rational than his critics. 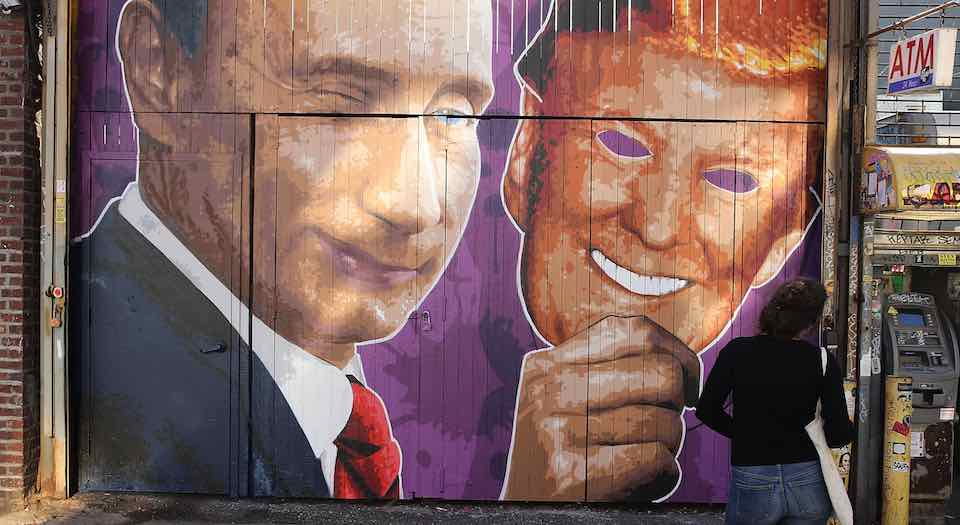 President Donald Trump signed a Senate bill last week designed to enforce sanctions on Iran, North Korea and, most significantly, Russia. Unusually, the bill also specifically limits any executive measures the president could take to get around the sanctions, requiring him to go first to Congress. The sanctions’ impact on Russia may be fairly limited, but what’s important is what they symbolise; namely, Congress’s determination to stop Trump from softening relations between Russia and the US. Which is why American and Russian pundits claimed that, as a result of the bill, any possible Russia-US détente had just been thrown into the deepest part of the ocean.

However, the sanctions bill is not just about Russia, or indeed Iran and North Korea. The real story here is the crisis within the US. It is going through a process not entirely dissimilar to the Soviet Union in the 1980s, when the entire political elite was in meltdown, and had lost contact with its own citizens. Yuri Andropov is purported to have said to the 1983 Soviet Communist Party plenum that the Soviet ruling elite no longer knew its own society. The same can be said of America’s ruling elite today. It bears repeating that a collapsing American establishment has even chosen the extraordinary path of arguing that its own democratic system has been taken over by a foreign power in preference to engaging with its estrangement from vast swathes of the public.

The level of hysteria in the US over Russia is incredible and it has ominous consequences for free speech. For instance, the long-established think tank, the German Marshal Fund of the United States, has just set up a project to ‘track Russian influence’ in the US. As an article in the Nation noted, it looks as if any outlet critical of anything in America can be classified as Russian propaganda, including not just the Moscow-backed Russia Today or Sputnik, but The Atlantic and Fox News. Remember, this is not the work of Trump and his supposed ‘fascist’ administration, but the so-called Resistance. As the old saying goes, with friends like these, American democracy has no need of enemies.

The Russian political establishment, given its statements and actions, is well aware of the internal American crisis. Hence Russian retaliation to the new sanctions has been low key, affecting mainly locally hired Russians, rather than Americans. The Kremlin has also said that despite the sanctions, it is still open to dialogue with the White House.

This latest White House-Kremlin drama obscures other changes in US relations with Russia and the rest of the world. Look at the EU’s criticism of the sanctions, for instance. This is because the bill gives the president the ability to impose sanctions on any company (including European) that contributes to the development or operation of energy export pipelines not just in Russia, but in Europe, too, or involves itself in oil ventures with Russian companies – a power that certainly affects the Nord Stream 2 gas pipeline from Russia to Germany. The EU has said that the US is acting in accordance with its own economic interests, and promised retaliation against the US if necessary. We’re a long way from a trade war, but the EU’s stance towards the US is more aggressive than it has been for decades.

Meanwhile, in other spheres, Russia and the US are actually cooperating – in Syria, for example. Until recently, Syria had been a site of major potential conflict between Russia and the US. Contrary to some commentary, this was not because American and Russian airforces were in the same airspace. That there was never an incident between the two suggests very effective military-to-military communication since Russia entered the war at Assad’s invitation in 2015. Rather, the point of potential conflict was the extent to which the US, under the Obama administration, was pushing for regime change in Syria. Russia has explicitly said that it would not permit another Iraq to unfold in Syria. As a result, it did appear that the US, in conjunction with the UAE and others, was preparing for war with Russia in Syria.

It seems, however, that the current US administration really is going to follow through on Trump’s original promise to disengage from Syria. Despite the Trump administration’s decision to bomb a Syrian airfield in April, after last month’s Trump-Putin meeting, it was announced that several ‘de-escalation zones’ had been agreed. It is notable that unlike the US-Russia announcements of various ceasefires and deals that took place in 2016, this deal was worked out behind closed doors rather than conducted in public. These agreements seem to be working and ISIS is now being rolled back in both Syria and Iraq. Trump has also announced the end of the CIA programme of funding of Syrian anti-Assad Islamists. While some pundits ludicrously called this a sop to Moscow (as if arming radical Islamist jihadists was not in any way problematic), this particular CIA programme was actually losing support under Obama. As one observer pointed out, Trump’s decision was partially motivated by a video of fighters from one of the West-backed anti-Assad groups, the Nour al-Din al-Zenki Movement, beheading a little boy. This should be mandatory viewing for pro-interventionists.

On the flipside, NATO-Russian relations are at their worst since the end of the Cold War. We are seeing a remilitarisation of the Baltics and Poland and supposedly neutral countries such as Sweden. Several American newspapers have reported that the Pentagon has just made public a proposal to arm Ukraine with anti-tank missiles, a plan drawn up under, but rejected by, the Obama administration, although the Pentagon has been training Ukrainian soldiers since Russia’s annexation of Crimea in 2014. There is no information yet as to whether the White House will consider the plan.

However, within NATO there are backstage dramas, too. Turkey for example may still be a NATO member in principle, but whether it is in fact is another question. Disagreements over funding ISIS (Turkey, along with the UAE, Saudi Arabia and Qatar, has been a key funder and supporter of ISIS in Syria), and claims that the US was behind the attempted coup in Turkey in 2016, and a recent Turkish purchase of billions of dollars’ worth of military hardware from Russia, suggest that all is not well in the NATO family. Last year, the German foreign minister Frank-Walter Steinmeier said NATO was playing a provocative and destabilising role in relations with Russia. Several EU countries, including Germany, although not the UK, are understandably hostile to the idea of arming Ukraine on the grounds that it will inevitably lead to more conflict.

The sanctions bill, then, is about more than the US-Russia relationship. It is about what is going on within the US itself. The confusion and collapse of the American political elite is accelerating geopolitical trends that have been developing since the 1990s. The sanctions bill certainly will not help relations between Russia and the US, but for all the claims that it will destroy the relationship for good, the relationship is probably more complex than it has been since the Second World War. Cooperation and conflict now exist in so many different areas and it is changing all the time.