The Orwellian nightmare of transgender politics

The Tories’ trans proposals could make it a crime to tell the truth. 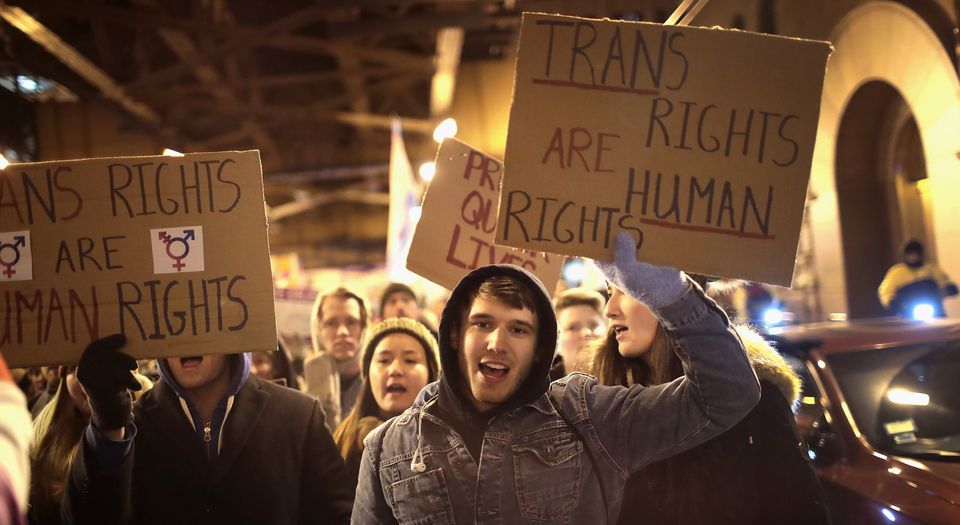 Britain is going full Orwell. The Tory government is proposing to include in the Gender Recognition Bill the ‘right’ to alter the sex on one’s birth certificate. So if a 32-year-old man decides that he is in fact a woman, he could be able to go to the General Register Office and insist that the word ‘Boy’ be erased from his birth certificate and replaced with the word ‘Girl’, or ‘Female’. Even though he was not a girl when that certificate was drawn up. Even though the midwife who declared ‘It’s a boy!’ when he was born, and the birth registrar who later wrote the word ‘Boy’ or ‘Male’ on his birth certificate, were telling the truth. That truth, that publicly recorded truth, that national truth, would be replaced with a lie. We’ve entered Ministry of Truth territory. The memory hole is real.

The Tory government’s trans proposals should alarm anyone who believes in reason and freedom. Revealed in The Sunday Times, the plan is to shake up the legal ‘gender recognition’ process to make it easier for trans people to identify as the opposite sex. Or no sex. One suggestion is for non-binary people, those who feel neither male nor female, to have the right to go back in time and stamp ‘X’ in the gender box on their birth certificate – a fitting image for the destructive, past-rewriting process that would be unleashed by this shake-up. And virtually anyone could do this. The government wants to scrap the current requirement of a medical diagnosis of gender dysphoria before you can switch gender and allow for ‘self-identification’. So any bloke could self-identify as a woman, apply for the legal right to be recognised as a woman, and – boom – he’s a woman. Sorry, she’s a woman.

It’s madness. And most people know it’s madness. Ask any normal, decent member of the public if Dave, 32, born a boy, still in possession of a penis, and a five o’clock shadow on a rough weekend, is a man or a woman, and I bet you they will say: ‘Man.’ Not because they are prejudiced or ‘transphobic’ – the latest phobia slur designed to pathologise dissent – but because they understand reality. And truth. And biology and experience. They know that in order to be a woman, you first have to have been a girl. They know womanhood is not a pose one strikes in front of the mirror but is biological, relational, cultural and social. They know the man who wears a dress is a man who wears a dress. Which is cool, and his choice, and he must have the right to wear that dress. But he isn’t a woman. We know this. At some level he knows this. Why won’t more people say it?

Because it has become the great unsayable. To say there are two sexes – leaving aside that infinitesimally small number of nature’s hiccups that are intersex people – has become tantamount to a speechcrime. To say a man cannot become a woman – no matter how many hormones he takes or operations he undergoes – is now next to blasphemy. Even if you fully accept that these people are trans-women, and that they should enjoy exactly the same rights as every other person, from the right to speak to the right to work, you will still be hounded and harassed if you dare say, ‘They aren’t women, though’. As trans-sceptical feminists have discovered, the utterance ‘Men cannot become women’ is to the early 21st century what ‘Jesus is not the Christ’ was to the 15th. We must accept that the person with a penis and a birth certificate that says ‘Boy’ is a woman. We must accept the lie. Like Winston Smith in Nineteen Eighty-Four, beavering away at the past-altering Ministry of Truth, we are made to lie. Trans agitators’ greatest accomplishment has been the institutionalisation of lying.

The government’s gender-recognition plans would have numerous socially destructive consequences. As some feminist campaigners have pointed out, they would plot a legal minefield through everyday public life, with men who identify as women potentially demanding access to women’s spaces or resources. From public bathrooms to rape-crisis centres to women-only colleges, the self-identifying female could legitimately barge into them all. They would also, implicitly at least, demean womanhood. There is something faintly, and sometimes blatantly, misogynistic in the idea that a man can become a woman simply by declaring: ‘I am a woman.’ (The vast majority of trans cases are male-to-female.) It reduces being a woman to a fashion, almost, a look, something that can be casually thrown on, like a pashmina. It empties womanhood of its social and biological depth and meaning and makes it mere identity. It says there’s nothing special about being a woman.

But perhaps the worst thing is the green light the government is giving to memory-holing, to the erasure of publicly recorded facts. To okay the rewriting of birth certificates is to nurture a new Orwellian era in which past events can be altered upon the whim of contemporary prejudice or hysteria. Just as Big Brother sanctions the shoving of inconvenient historical documents into a memory hole and their replacement with ‘improved’ versions of history – so that ‘the lie passed into history and became truth’ – so the Tories are proposing a system in which key documents, the very registry of life in Britain, could be edited. Forever. A document that once told us a boy was born on 18 August 1985 would now tell us a girl was born on that day. It would lie to us, and to future generations. Shouldn’t this concern us, this official approval of misinformation?

The authoritarian implications of the government-backed trans agenda are chilling. People should be free to identify as anything they like – male, female, black, white, rabbit, handsome, clever, the Second Coming, Napoleon Bonaparte. Whatever. But the rest of us should be free to say: ‘You are not that thing you claim to be. But good luck to you.’ The problem with the gender-recognition tyranny is that it doesn’t only say ‘identify however you please’ – it also cajoles public institutions, and by extension the public at large, to accept an individual’s self-identification. And it cannot be long before we will face punishment for refusing to do so. In New York, employers who ‘intentionally’ misgender the man who identifies as a woman can be fined $250,000. Soon we might all find ourselves forced under pain of financial retribution to say something we consider to be a lie. Speaking the truth, or what a huge number of people consider to be the truth, could become a criminal act. As I say, we’re going full Orwell.