Macron and Trump have more in common than you think

Both presidents are in love with themselves and authoritarianism. 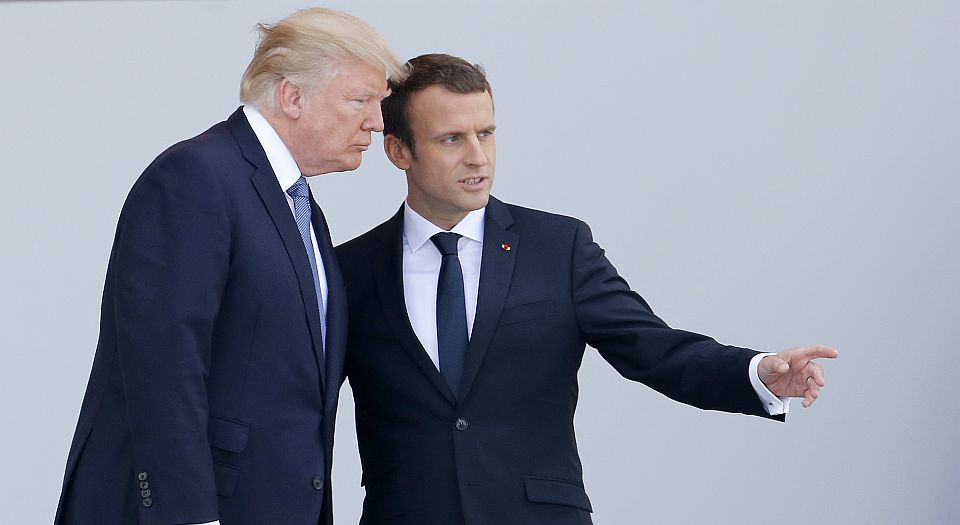 A video clip of President Donald Trump and President Emmanuel Macron’s wildly different responses to the Bastille Day marching band’s rendition of Daft Punk’s ‘Get Lucky’ has had over five million views. It is hard not to be amused by the spectacle of a sombre-faced Trump, looking like he’s at a funeral, next to the boyish delight and head-bopping of Macron.

For many, though, this clip epitomises stark differences between the two presidents. The Metro called Trump’s response a ‘granddad reaction’. His visit to Paris involved a ‘catalogue of toe-curling exchanges’, the paper said. Much has been made in the press of the presidents’ lengthy handshake shake-offs. And of Trump’s cringeworthy comments on the French First Lady’s physique. ‘She’s in such good physical shape’ – this was said as a compliment to Macron. In the Guardian, Mary Dejevsky argued that Macron’s poise in the face of Trump – who ‘seemed to crash into Paris from another, more basic, more elemental world’ – was a lesson in diplomacy. ‘Lurking somewhere in Emmanuel Macron’s team, there has to be a genius in the diplomatic arts; perhaps Macron himself’, she wrote.

The young, hip Macron, who knows his electro-pop from his military marches, is said to be a world away from the old, oafish Trump. But are these two politicians really so different? Closer inspection suggests not.

After coming to power, both showed a predilection for pomp and grandeur and seemed wedded to an overblown presidential image. Trump likes to give guided tours of the Oval Office to TV crews and entertain in the White House Rose Garden, while Macron has been criticised in the French press for behaving like a king. During his election campaign he compared himself to the Roman god Jupiter. Last month he gave his speech to parliament in the opulent surroundings of Versailles.

Both Trump and Macron clearly see the role of president as standing apart from legislative institutions. Each has demonstrated a very worrying bent towards authoritarian rule. Once inaugurated, Trump wasted no time in pumping out executive orders – he signed 30 in his first 100 days. Macron has pledged to reduce the number of elected MPs, which would give more power to the executive. And alarmingly, he wants to make France’s emergency powers part of normal legislation. France has been in a state of emergency since the November 2015 terror attacks. Macron’s proposal would mean temporary powers, such as police searches without warrants, could become permanent. There are more checks and balances on presidential power in the US than there is in France, so at least Trump’s autocratic tendencies can potentially be reined in.

Mistrust of the press is another thing Trump and Macron share. Trump frequently accuses the media of pushing ‘fake news’. He has been embroiled in an online war with CNN for months. Meanwhile, Macron has declined almost all interviews since becoming president. His team tried to cherry-pick the journalists who could accompany him on one of his first foreign trips as president. He also refused to take part in the traditional Bastille Day press conference – according to an Elysée Palace source, his thoughts are too ‘complex’ for journalists to understand.

Even on the highly contentious issue of immigration, Macron is similar to Trump. Last month, the very pro-EU president said EU migration policy must be ‘profoundly reformed’. Trump faced a huge amount of criticism, and still does, over his attempts to implement a travel ban on people coming to the US from six Muslim-majority countries. Macron has faced far less criticism for his comments on tightening EU rules against ‘posted workers’ (which allows foreign workers to pay social insurance in their home countries), which has allowed EU nationals from poorer eastern EU countries to undercut salaries in France.

In presidential styles, too, there are similarities. Both have expressed a desire to run their nations like businesses. During the election campaign, Macron’s team often used business jargon, while Trump has spent years mixing business with public life, most notably through his reality TV show The Apprentice.

But there’s one serious difference between these two powerful leaders: the reaction they have received, particularly from the mainstream press. Macron is celebrated, and Trump demonised, despite all the political traits they share in common. During the second round of the presidential election, when he stood against Marine Le Pen, Macron was cheered as a barrier against all the populists, all the Le Pens, across Europe. He was the French media darling, and he became an idol of liberal publications across the continent. In contrast, Trump and his supporters are looked upon with suspicion. The election of Trump was viewed by much of the mainstream press as an angry, thoughtless rebellion against the establishment.

At last, Macron’s shine is starting to fade in the eyes of some in the French press, with observers criticising his kingly ways and antagonism towards the media. Yet, in the UK, he is still fawned over. Little was made here of the shockingly low turnout in the French parliamentary elections, which exposed Macron’s distinct lack of appeal to most French voters. And little is made of his authoritarianism. Instead he is cheered, it seems, for being young, hip and attractive. And politically correct: he made a big show of putting more female MPs in the National Assembly.

But these things are entirely superficial. At some point, even commentators in the liberal-left media will have to look beyond Macron’s ability to nod along to ‘Get Lucky’, and recognise that he might just be a smoother, more articulate version of that other president, the one they love to hate.