The DUP is not the problem with UK politics

They are all Undemocratic Opportunist Parties now 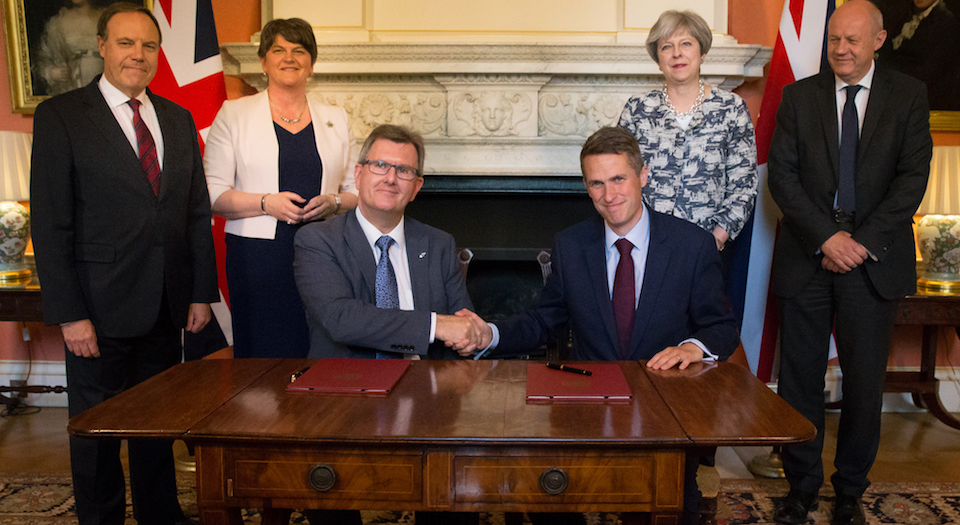 There have been howls of protest in UK political and media circles about the Conservatives doing a deal with the Democratic Unionist Party of Northern Ireland, to allow Theresa May’s maimed minority government to get its denuded Queen’s Speech programme passed in parliament and remain in office. What’s all the fuss about?

Opponents are apparently outraged by an ‘illegitimate’ Tory government being propped up by the ‘Medieval revivalists’ of the DUP – the Protestant Loyalist party of the late Reverend Ian Paisley, which still holds unfashionable views on gay marriage and abortion – in return for a £1 billion ‘bung’ of extra government funding for Northern Ireland.

The ‘confidence and supply’ deal with the DUP certainly exposes the featherweight fragility of May’s grip on power. Having lost her majority in the General Election, the prime minister has had to abandon unpopular manifesto proposals, notably on pensions and social care, to secure the parliamentary votes needed to survive.

When Jeremy Corbyn’s Labour Party proposed an amendment to this week’s Queen’s Speech, to end the cap on public-sector pay rises ostensibly in response to the heroics of the emergency services from Manchester to London Bridge and Grenfell Tower, the Tories’ chaotic response exposed a hollowed-out, crumbling party. First the government indicated that it would ‘review’ the cap – then insisted that its policy remained unchanged. That reverse-ferret was said to reflect the rising influence of ‘Spreadsheet Phil’ Hammond, the Tory arch-Remainer and technocrat, which is bad news for dynamic politics and the prospects of an effective Brexit.

The Tories’ weakness raises serious questions about how long May can remain in office, and whether her government will even last the two years for which the DUP has signed up. But would the alternatives be any better? The sort of criticisms levelled at the DUP deal reveal the political paucity of the UK’s opposition, reports of ‘Corbynmania’ notwithstanding.

‘Illegitimate’? Labour leaders claim that, having lost their parliamentary majority, the Tories have ‘no legitimacy’ to govern, and that a Conservative minority propped up by the DUP is ‘not a legitimate government’. Corbyn himself responded to the election result by calling for May ‘to go, and make way for a government that will be truly representative of all the people of this country’.

Far be it from me to stick up for May, but hold on a minute. Corbyn might be the legitimate leader of the Glastonbury festival field. Let us, however, recall the real results of the election held only three weeks ago across the UK, though it now seems more like three years, so much has happened since.

The Tories lost their parliamentary majority. Yet even after May’s dreadful campaign – described as a ‘cult of no-personality’ – they still emerged as easily the largest party in parliament, with more than 42 per cent of the votes cast and 317 MPs, needing only the support of the DUP’s 10 MPs to secure a working majority. Despite his claim to be ‘truly representative of all the people of this country’, Corbyn’s Labour Party won only 262 seats and 40 per cent of votes cast – which, given the turnout of 68.8 per cent, means he can now ‘truly’ claim to represent about 27.5 per cent of the entire electorate. If the Tories are ‘illegitimate’, what would that make a minority Labour government?

The informal Tory-DUP alliance certainly looks more legitimate than the formal Tory-Lib Dem coalition government of 2010-15. That was a government which literally nobody voted for, formed by two opposing parties whose manifestoes had little in common. By contrast, the Tories and DUP are often on the same side – not for nothing is it traditionally called the Conservative and Unionist Party. And right now, they are on the same page on by far the biggest issue in politics: the need to deliver Brexit, as demanded by a clear majority across the UK in the 2016 EU referendum.

That does not mean that we should trust the likes of May (another Remainer) and Hammond to bring Brexit home. But it still looks like at least a more ‘legitimate’ UK government than any coalition formed of a divided Labour Party that is pulling in both directions over Brexit, propped up by a ragbag of conniving Remainers from the Lib Dems, Scottish Nationalists and other rump parties.

‘A corrupt bung’? Opposition parties and the anti-Tory media are up in arms at the extra £1 billion of public funding the Tories found for Northern Ireland to secure the ‘confidence and supply’ deal with the DUP. Though the amount is only a fraction of one per cent of the overall public spending bill, this does look to many like the sort of ‘pork barrel’ politics that gives governments a bad name. But what are they really complaining about?

After all, the £1 billion is largely aimed at the sort of areas where opposition parties have long demanded an increase in public spending – infrastructure (£400million), education and health (£300million), the deprivation fund (£100million), and mental-health services (£50million).

What’s more, the opposition has made far less noise about the fact that the DUP – which is often to the ‘left’ on public spending – also got the Tories to promise the keep the ‘triple lock’ on state pensions for the next two years (at an estimated cost of £14 billion) and maintain winter fuel payments for all UK pensioners for five years (£8.5 billion). These far more expensive concessions are precisely what most opposition parties support. So why aren’t they happy?

The answer appears to be that the concessions were won by the wrong party – the DUP – and the extra billion quid will go to help the ‘wrong’ sort of deprived people: the non-Labour-voting working classes of Northern Ireland. That is clearer still in the reaction of the Scottish Nationalists, who threw their toys out of the pram at the prospect of somewhere other than Scotland getting an extra handout from Westminster. It is a strange sort of movement for national ‘independence’ whose main demands are for bigger dependency payments from the UK government, and for the right to remain a dependent outpost of the EU.

You do not have to look too closely to see that the ‘vote-buying’ Conservatives have no monopoly on political opportunism and cynicism in the UK and devolved parliaments.

‘Untouchable DUP’? Critics claim it is outrageous for the Tories to seek any sort of alliance with the DUP, viewed as the untouchables of UK politics – and even branded ‘fascist’ on the fringes of social media – for their reactionary policies past and present. This hysteria hides more hypocrisy.

The Democratic Unionists would be few people’s idea of a ‘progressive’ party. Formed as the radical ‘Paisleyite’ wing of loyalist politics, the DUP has now displaced the traditional Ulster Unionists as the voice of majority Protestant opinion in the divided province. Coupled with its historical ‘No Surrender’ brand of militant Loyalism, the DUP’s continued opposition to legalising abortion and same-sex marriage in Northern Ireland apparently makes it anathema to the ‘progressive alliance’ of UK opposition parties.

Strangely, however, as the DUP itself pointed out this week, that did not prevent the Labour leadership from reaching out to the untouchable loyalist party around the General Elections of both 2010 and 2015. Labour wanted to explore the prospects of DUP MPs backing a coalition government led by Gordon Brown (2010) or Ed Miliband (2015). We don’t yet know how much the Labour Party was prepared to pay, politically or financially, for their support. But we do know that even in the 1970s, at the height of ‘the Troubles’ in Northern Ireland, the minority Old Labour government led by James Callaghan was kept in office only by buying the votes of loyalist MPs.

As for the DUP’s unfashionable opposition to legalised abortion in Northern Ireland – that is undoubtedly a reactionary position, and abortion should of course be available to all women in Ireland, north and south of the border. (Though contrary to current claims by some feminist campaigners, it is NHS England rather than the DUP which refuses to pay for abortions for women travelling from Northern Ireland.)

Strangely again, the same opprobrium is rarely directed at Sinn Fein, the republican party which now represents most Catholic nationalist opinion in Northern Ireland. Sinn Fein is often depicted as part of the wider ‘progressive alliance’ and there has even been excited talk of Sinn Fein MPs taking their seats at Westminster for the first time ever, to help vote in a minority Labour government led by their old ally Jeremy Corbyn. Whisper it, but Sinn Fein is also opposed to the legalisation of almost all abortions in Ireland – there have recently been major inner-party ructions over the leadership’s move to accept abortions only in cases of severe fetal abnormality. Yet somehow they have avoided the wild allegations of ‘fascism’.

It is hard to avoid the conclusion that much of the bile directed against the ‘Medieval revivalists’ of the DUP is really aimed at the party’s ‘backward’ electorate. As Brendan O’Neill argues elsewhere on spiked, this is partly a revival of old British political prejudices about the people of Ireland. It is also a thoroughly modern ‘liberal’ prejudice against working-class voters who refuse to vote the ‘correct’ way. Behind the celebration of popular ‘Corbynmania’, the political elites retain their contempt for that large part of the populace that still refuses to back Remain or Labour. They are all Undemocratic Opportunist Parties now.