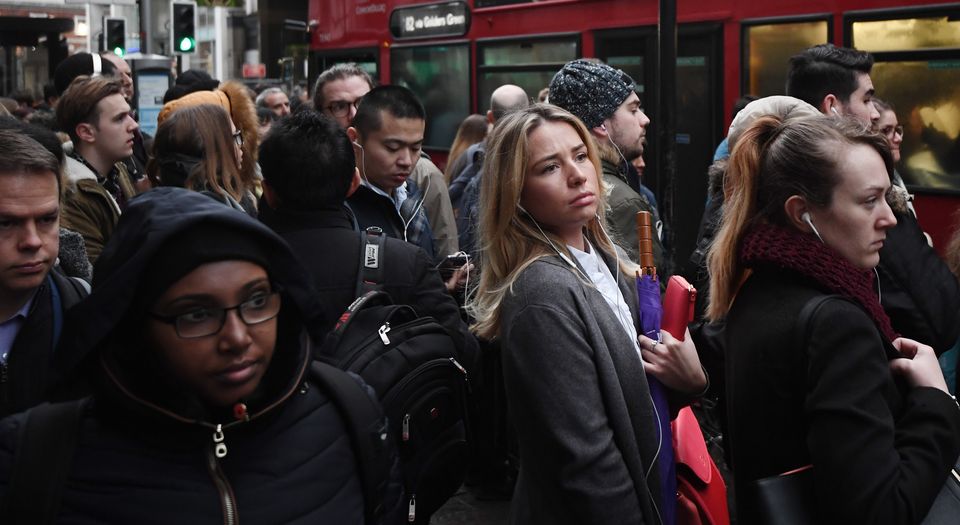 Uber, the taxi firm that has no cabs and hires no drivers, made headlines again last week. Apparently, the fact that it is haemorrhaging money is not top of the company’s current concerns. Rather, board members are concerned about Uber’s sexism problem. And, in a ‘you couldn’t make this stuff up’ moment, a director has now resigned for making a sexist comment in the meeting about tackling sexism.

The Uber-sexism story has purchase because it confirms a wider narrative of the workplace as a battleground where women have to negotiate sexism at every turn. We regularly hear about misogynistic bosses, sexist air conditioning, and men ‘microaggressing’ women through ‘manspreading’ in the office and ‘mansplaining’ in meetings. Perhaps unsurprisingly, then, one survey tells us that ‘83 per cent of women think gender discrimination exists in the workplace’.

In The Equal Opportunities Revolution, James Heartfield puts today’s concerns about workplace discrimination into perspective. He reminds us of a time, not that long ago, when women, if they worked at all, had bigger things to worry about than misplaced jokes; a time when ‘a gender and racial division of labour’ meant women and black and minority-ethnic people were kept out of the workforce altogether or pushed into jobs with the lowest pay and the worst conditions.

Heartfield provides a detailed account of the institutionalised workplace discrimination that was often backed by the same groups who today champion equal opportunities. It was the socialist Fabian Society which in 1905 declared, ‘the nation must set its face against the employment of married women’. Trade unions, meanwhile, protected the interests of their own members – largely white working-class men – by either enforcing or simply not challenging practices that relegated women and black people to badly paid, low-skilled and insecure jobs.

Heartfield shows how trade unions, through fighting for the interests of their members, were at the same time drawn into acting in the interests – and prejudices – of the elite. ‘One sign of organised labour’s identification with Britain’, he argues, ‘was its opposition to immigration and hostility to foreigners’. Heartfield’s point here is not so much to criticise unions that were successful in winning rights for working people, but rather to show how it was ‘the greater equality afforded English working-class men that opened up the inequality between them and the oppressed’. To this end, the unravelling of the often cosy relationship between capital, union leaders and government ministers in the 1970s and 1980s ‘seemed to signal an even harsher iteration of gender and racial inequality than before’.

However, the key point of The Equal Opportunities Revolution is that, even at this time, ‘other changes were pulling in an altogether different direction’. These changes were both reflected and enacted in equal-opportunities policies designed to address discrimination against women and ethnic minorities at work. Such legislation has, in its own terms, been a phenomenal success, and Heartfield shows how such policies have helped bring about a ‘complete change in British attitudes towards race and sex discrimination’ over the course of just a couple of decades.

Today, the phrase ‘equal-opportunities employer’ appears so routinely on job adverts that it is barely remarked upon. At work, people might privately moan about the inconvenience of having to attend an ‘equality and diversity workshop’, but few question why such workshops exist or the authority of the HR team running them. This ambitious book explores what the success of equal-opportunities policies represents for both social equality and workplace relations. On the one hand, racism and sexism are significantly less important in the workplace than they once were. However, as Heartfield is quick to point out, this does not mean that black people and women face no barriers to career progression, but rather that the obstacles are far fewer today and different in nature than a generation ago.

So, what changed? Progress, as Heartfield shows, was at first painfully slow. The goal of equal pay first appeared in the 1950 Labour Party manifesto, but even when the Equal Pay Act was passed in 1970, employers tried hard to find ways round the new legislation. And over the 30 years of the Commission of Racial Equality, public attitudes and policy ‘shifted slowly – glacially slowly, it seemed’.

Key to understanding the equal-opportunities revolution, Heartfield argues, is the changed relationship between employers and workers. In the UK last year, 332,000 working days were lost to strike action. This figure was considerably higher than it was in previous years, thanks mainly to the strike by junior doctors, which accounted for 40 per cent of the total. By contrast, in 1979, striking accounted for over 29million lost working days. Weakening the power of the trade unions became a primary objective of both government and business between 1979 and 1990.

These workplace reforms, enacted against a backdrop of falling productivity, took away many of the mediating links between workers and bosses. As Heartfield notes, ‘employees were strangers to their employers’. In this context, equal-opportunities policies served a number of different purposes. They allowed businesses to score public-relations points and renegotiate a relationship with customers. More fundamentally, they provided a means through which bosses could rehabilitate their relationship with workers – only with a very different balance of power. Taken together, this meant that effective human-resource-management practices could increase a firm’s performance.

Heartfield points out that managers ‘aimed to draw unions into the implementation of equal-opportunities policies’, and that, significantly, this ‘injunction to cooperate with management was made at a time when workers were, on other issues, contesting workplace codes of discipline’. Equal opportunities allowed ‘a remotivation and reordering of workplace discipline’ to become intrinsically linked ‘to two (and more) substantial movements for social justice, the women’s movement and the anti-racist movement’. As an added bonus, employers further recognised that equal-opportunities policies could be an advantage in the event of complaints of discrimination.

The success of this new management tool was in part due to its hijacking of a radical left-wing agenda. Managers got away with this because human-resources departments were morally revitalised and resurgent in the context of a ‘shift away from national pay awards… towards individual performance reviews, and towards flexible working hours’. The collective bargaining between unions and bosses was replaced, often in the name of ensuring equal opportunities, by a far more individualised relationship between employer and employee. Furthermore, equal-opportunities policies allowed the workforce to be opened up to greater competition. When industry was no longer the preserve of white working-class men, the pool of labour increased. As Heartfield notes, ‘the point of labour-market liberalisation was to keep wages competitive – which is to say lower’. But now, rather than bosses and workers being pitched against each other, the equal-opportunities policy has come to codify ‘an assertion of a common interest’.

Heartfield’s thorough exploration of the reasons for the take-up and success of equal-opportunities policies is nuanced. This is not a straightforward story of progress for women or black and minority-ethnic groups. Where some individuals have gained, often the working class as a whole has lost out. Victors emerge only to find the prize is not what they were expecting. What’s certain is that ‘the greatest take-up and expansion of such policies took place while Thatcher was in office, between 1979 and 1990’, and this alone should prompt questions as to what the equal-opportunities revolution really represents.

Ultimately, Heartfield argues, ‘equal opportunities are set out as the fulfilment of the free market; equality of opportunity is the counter-claim to the socialist demand for equality. To get rid of unfair discrimination is to make the labour market more perfect.’ So what we are left with is ‘a revolution that did not overthrow the market system, but instead perfected it’. In practice, this is a revolution that has lessened the authority of trade unions, capable of arguing in the collective interest of all workers, and increased the authority of the human-resources department over the lives of individual workers.

In the UK today, at a time when employment is at a record high, union membership stands at an all time low of 6.2million workers, less than half the 1979 figure. To be working class today, as Heartfield notes, ‘does not mean identification with the labour movement’. The weakening of unions and the expansion of the labour market has, unsurprisingly, gone hand in hand with relatively lower wages. As he explains, it has become ‘cheaper for employers to expand their businesses by taking on new workers, than by investing in new machinery’, and these new workers are making a fortune for British business.

In today’s workplace, shaped by the language of equality and policed by diversity officers, there has definitely been ‘improvement in the position of women relative to men, and of black people relative to white people’. The gains women and black people have made at work are worth celebrating. But Heartfield is quick to acknowledge that ‘equal opportunities does not imply equality of outcome’. Changes in the workplace reflect and prompt broader social changes, and ‘as women who might be earning more than their male peers have children, they are less likely to withdraw permanently from their chosen career’. This progress has taken place ‘in the context of a worsening of the position of all working people, relative to their employers’.

The challenge we face now is to consolidate gender and racial equality while at the same time fighting for better pay and conditions for all workers. But Heartfield hints at the limits of equal-opportunities policies that are used ‘to enforce compliance, not to win support’. Instead of a collective movement for change, we see the emergence of competing interest groups and the adoption of a victim mentality that simply reinforces the power of managers through their human-resources departments.

The importance of this timely and engaging book goes considerably beyond increasing our understanding of today’s workplace. It is a vital read for anyone trying to get to grips with the nature of the fundamental social changes that have occurred in the UK over the past few decades. Within The Equal Opportunities Revolution is a superb analysis of how and why, as a recently published YouGov analysis of voting trends in the 2017 General Election showed, the Labour Party has lost touch with what was once its core base among the working class.

In an age of identity politics, this is also a very brave book. For a white man even to write about the experiences of women and black people today, let alone to argue that sex and race discrimination are notably less significant than they once were, requires real guts. The Equal Opportunities Revolution is a great read not just because of the thoroughness of Heartfield’s scholarship but because it is grounded throughout in his own experiences as a long-standing campaigner for equal rights.

The Equal Opportunities Revolution, by James Heartfield, is published by Repeater. (Buy this book from Amazon(UK).)