The postmodern roots of the alt-right

Kill All Normies provides a powerful analysis of the new online culture wars. 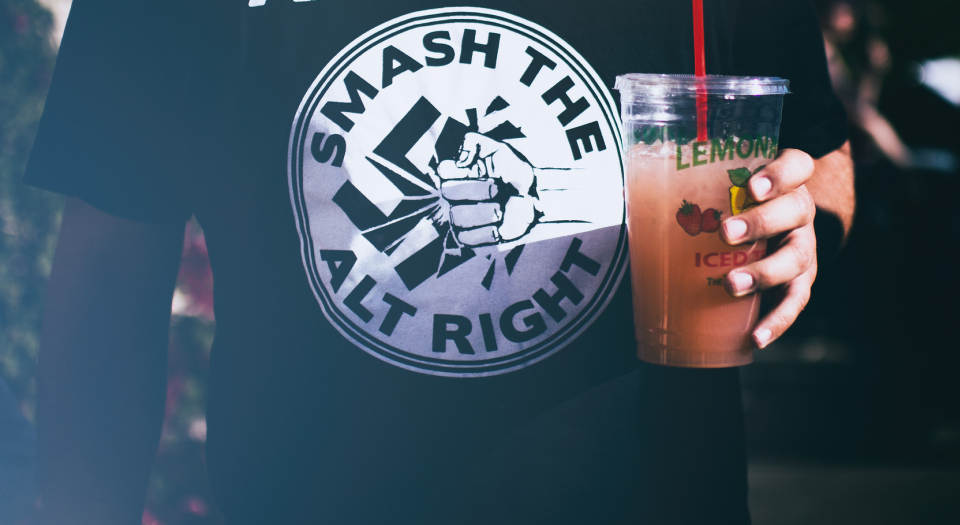 You might have been bemused by reports last month that artist and cartoonist Matt Furie had killed off one of his most famous creations, Pepe the Frog, because it had been appropriated by alt-right meme-makers as an online ‘hate symbol’.

For many, Furie’s decision will raise questions (and eyebrows). After all, can a chilled-out cartoon amphibian really possess such symbolic power? Why are supposed Nazis adopting such an infantile mascot to promote their hateful ideas? And, most important of all, why do we care what bedroom-bound, live-at-home-with-mum wastrels post on obscure internet forums?

The answers to these questions can be found in Angela Nagle’s new book, Kill All Normies: Online Culture Wars from 4Chan and Tumblr to Trump and the Alt-Right, a thought-provoking exploration of the obscure world of online youth culture and an analysis of the ways it is shaping the political sensibilities of our times.

For Nagle, cyberspace is the setting for what she sees as the new culture wars. Online messageboards, such as 4chan, are the most infamous of the new culture-war arenas, but these value conflicts are also being played out on Twitter, Reddit, Tumblr and even comments sections. The internet, concludes Nagle, has provided a new platform for far-right ideas, often combined with dehumanising insults. This has allowed traditional fascistic ideas to gain traction among a new millennial audience.

The growing prominence of these online right-wingers is reflected in the fact that they now have a label: the ‘alt-right’. As Nagle explains, ‘what we now call the alt-right is really this collection of lots of separate tendencies that grew semi-independently but which were joined under the banner of a bursting forth of anti-PC cultural politics through the culture wars of recent years’.

But, Nagle continues, ‘those who claim that the new right-wing sensibility online today is just more of the same old right, undeserving of attention or differentiation, are wrong’. What marks out this new right, drawing together misogynists, white supremacists, anti-Semites and sundry other hate groups, is that it is situated squarely within a postmodern landscape.

Nagle describes how the alt-right directly draws upon the ideas and methods of postmodern counterculture, especially its tactic of transgression, and its mocking and dismissal of everything normal, normative, hegemonic or produced by and for the masses – in short, anything that has a whiff of universality about it. Just as hipsters mock those outside of their archly ironic inner circle, by appropriating the look and style of white trash while drinking Pabst Blue Ribbon beer, the new alt-right online culture mocks the ‘normies’ – that is, those who don’t ‘get’ the nihilistic, self-ironic nature of alt-right internet boards.

Nagle argues that the alt-right’s ‘ability to assume the aesthetics of counterculture, transgression and nonconformity tells us many things about the nature of its appeal and about the liberal establishment it defines itself against’. This makes sense. Just as the counterculture of the Sixties was pitted against the authoritarianism of the socially conservative, so the alt-right is pitted against the authoritarianism of the the liberal establishment, whose members are determined to control and regulate artistic expression, proscribe who and what should be represented in cultural outputs and what can and can’t be said in everyday conversation. The Gamergate controversy, which began as a clash over perceived sexism in the videogames press, was merely the point at which this new culture war gained traction among the wider public.

Nagle shows how both sides of the new culture wars are the product of the same postmodern Zeitgeist. On the liberal side, there are the increasingly hysterical online activists driven by the ideas of third-wave feminism, and focusing on representation, emotional hurt and personal feelings of alienation. All this is expressed in the form of, as Nagle puts it, an ‘obscure call-out culture… emanating from Tumblr-style campus-based identity politics… in which everything from eating noodles to reading Shakespeare was declared “problematic”, and even the most mundane acts “misogynist” and “white supremacist”‘.

On the alt-right side comes the reaction to this overbearing public demonstration of virtuous sensitivity, which often involves performing acts of transgression for transgression’s sake – or, in other words, ‘trolling’. Trolling is therefore best grasped as the baiting of the professionally offended. It is a sport, for the lolz, and has no purpose other than the act of transgression. While some people within the alt-right are demonstrable bigots, others simply delight in this provocation.

The poster boy for the alt-right counter-liberal reaction is, of course, Milo Yiannopoulos, who has made a media career from rejecting acceptable behaviour. So he calls Trump ‘daddy’, flaunts his ‘faggotness’, and bemoans how mainstream and non-transgressive gayness has become. He is best captured by his childish provocation, ‘feminism is cancer’.

For Nagle, however, both the Tumblr identitarians and their online alt-right baiters are simply different cheeks on the same postmodern arse. The emptiness of their gestures and their performance of transgression reveal their combined failure of political thinking.

Moreover, Nagle argues, the performance of transgression as an end in itself lacks any positive moral content. And this lack can therefore be filled with the morally questionable. ‘During the recent online culture wars and their spillover into campus and protest politics’, she writes, ‘feminists have tried to embrace transgression with the Slut Walk movement and sexpositive pro-trans, pro-sex worker and pro-kink culture that was central to Tumblr. However, like the right, it has run up against a deep philosophical problem about the ideologically flexible, politically fungible, morally neutral nature of transgression as a style, which can characterise misogyny just as easily as it can sexual liberation.’

This is because if transgression is a goal in itself, any political message is at best ambiguous. For example, just uttering the word ‘nigger’ in order to rile people says nothing. It might open the door to racism, it might not. This is how the right’s appropriation of postmodern tactics becomes the canary in the coal mine for the failure of the postmodern left.

And what a failure it is. The left’s abandonment, after the Second World War, of universalism in favour of particularism and identity politics also meant that it left behind its key argument against fascism: the commonality of human subjectivity. The universalist project – and with it, the promise that humans could transcend cultural and local differences – was traded in for an acceptance that all people are trapped in language and history. The only critique open to the left was deconstruction, and the only tactic, transgression.

On the internet, the right, with nerdy alt-righters to the fore, has taken the left on at its own postmodern game, speaking the same postmodernist babble of deconstructing concepts, and indulging in wanton transgression. It’s just that their target was not patriarchy or capitalist hegemony or some such, but the unprincipled liberal hegemons of Tumblr.

But then those sympathetic to the alt-right who bait liberal authoritarians have failed to take a moral stand against the real fascists in their midst. Admittedly there were some, like the US journalist Cathy Young, who, having sympathised with those rebelling against the oppressive liberal orthodoxy, took a clear moral stance against the misogyny and racism of the new right, and cut ties with it. But most others either failed to take this moral stance or found the alt-right counterculture too comfortable to want to leave it.

Yet the new right, as Nagle points out, is as divided as any cultural movement. Nagle’s descriptions of its bizarre subcultures and sects are hilarious, especially those of the so-called men’s rights movement, from the sadsacks of the Red Pill forums to the ascetic Proud Boys movement, which only half ironically celebrates a #nowank policy.

Kill All Normies explores every nook and cranny of the alt-right world, deciphering the in-jokes, reactions and meta-memes. Nagle dives deep into the relationships and contradictions between the different outbursts of the internet culture wars but notes that they all have one thing in common: a willingness to be dehumanising to one another.

Nagle also identifies a new phenomenon: that online spaces forgo the distinction between the public and the private, a distinction that, from the Enlightenment onwards, was deemed essential to individual flourishing. This is not to say that the personal is once again political, to recite that old countercultural credo, but simply that the distinction between private and public ceases to exist. The result is that our own moral universes expand to fill the space where the public sphere once was. The philosopher Slavoj Zizek’s pointed assertion that, in a postmodern, permissive society, where there is no big Other, everything is forbidden, rings true when confronted with the rampant self-censorship and competitive censoriousness of the internet.

As Nagle explains, the internet was initially seen by many as a utopian project: ‘The coming of a networked society [was one] in which old hierarchical models of business and culture would be replaced by the wisdom of crowds, the swarm, the hive mind, citizen journalism and user-generated content.’ As it turns out, the opposite happened. The absence of hierarchy, indeed, the lack of external authority outside the self, has generated the need for politically correct self-regulation. As Zizek puts it, ‘people thus become obsessed with the concern that, in pursuing their pleasures, they may violate the space of others, and so regulate their behaviour by adopting detailed prescriptions about how to avoid “harassing” others’. The alt-right is just a moronic extension of / reaction to this climate.

Nagle’s analysis of the degeneration of the postmodern internet brings to mind the interwar German critic Walter Benjamin’s assertion that ‘behind every fascism, there is a failed revolution’. The cyber revolution promised a new, unoccupied space, outside a determined network of power structures. But it was a promise squandered. ‘This network has indeed arrived’, writes Nagle, ‘but it has helped to take the right, not the left, to power’.

Kill All Normies: Online culture wars from 4chan and Tumblr to Trump and the alt-right, by Angela Nagle, will be published by Zero Books on 30 June. (Order this book from Amazon(UK)).

Picture by: Johnny Silvercloud, published under a creative commons licence.