How Trump is tearing apart the Middle East 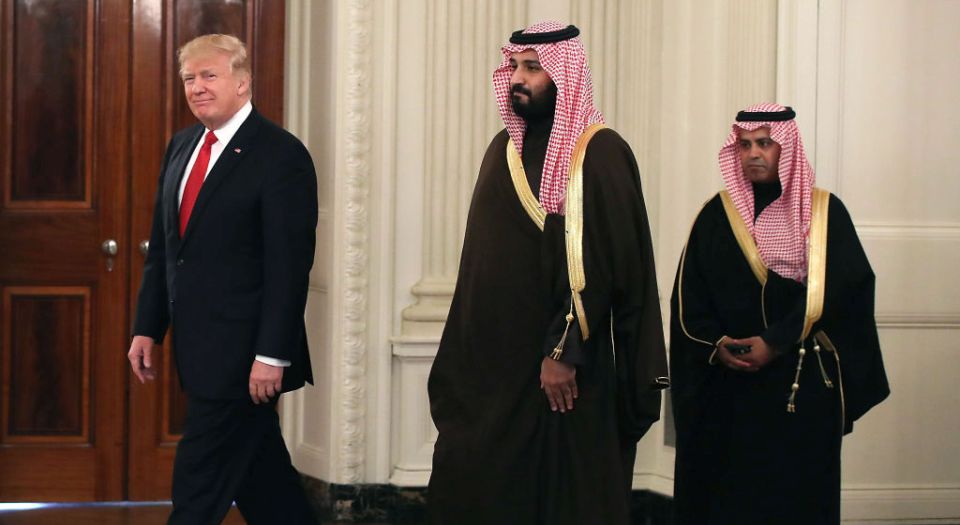 Professional tweeter Donald Trump, with nudges from his retinue of advisers, is once again proving himself a crass amateur when it comes to international diplomacy. Two weeks ago he visited Saudi Arabia to do a sword dance with Saudi royalty, enjoy a confab with other Gulf monarchs, and, according to Trump himself, sort out Islamist terrorism. And, incredibly, thanks to Trump’s intervention, an already chaotic situation in the Middle East, in which local disputes are almost always simultaneously international conflicts by proxy, has become even more messily absurd, as two US allies, both of whom host the US airforce, are now being pitched into battle against each other.

Not that Trump, his delusions of moral grandeur duly inflated, seems concerned. ‘We had a decision to make’, he boasted last week of his conversations with the Sauds and their regional allies. ‘Do we take the easy road or do we finally take a hard but necessary action? We have to stop the funding of terrorism.’ And so, according to Trump, he, alongside Saudi Arabia’s King Salman, decided it was time to confront and punish the region’s terror-sponsor-in-chief: Qatar.

Last week, this small, oil-rich peninsula state, jutting out from the Saudi Arabian coastline into the Persian Gulf, got what was supposedly coming to it – for its ’embrace’, as the Saudi government put it, of ‘various terrorist and sectarian groups aimed at destabilising the region’. So it was that the monarchical and military autocrats of Saudi Arabia, the United Arab Emirates, Egypt and Bahrain, followed later by the barely ruling governments of (a part of) Yemen and (a part of) Libya, announced that they were cutting ties with Qatar. They shut its borders, severing land, sea and air contact, and the Saudis, the UAE and Bahrain gave all Qataris two weeks to leave their territories, and only 48 hours for Qatari diplomats to do likewise.

Faced by a potentially explosive crisis among those the US actually counts as allies, Trump, as he so often is, was chuffed with himself. ‘So good to see the Saudi Arabia visit with the King and 50 countries already paying off’, he tweeted. ‘They said they would take a hard line on funding… extremism, and all reference was pointing to Qatar. Perhaps this will be the beginning of the end to the horror of terrorism!’

Now, Trump’s argument, repeated back to him by the Saudis, is not entirely without substance – or indeed precedence. In 2009, John Kerry, who was then a US senator, complained that ‘Qatar can’t be an American ally on Monday that sends money to Hamas on Tuesday’. An Israeli ambassador to the UN even described the Qatari capital Doha as a ‘Club Med for terrorists’, with Hamas leader Khaled Meshal a long-term occupant of the Four Seasons in Doha, and al-Qaeda financier Abd al-Rahman bin Umayr al-Nu’aymi finding himself an equally commodious Doha abode. Sheikh Yusuf al–Qaradawi, the spirtual force behind the Muslim Brotherhood, with a lifetime of advocating suicide bombing behind him, has also found a place to call home in Doha. And then there’s what Qatar does outside its borders, with strong evidence to suggest it has been funneling billions of dollars worth of funding to rebel groups in Syria, including the al-Qaeda spin-off, al-Nusra Front.

Yet there’s an obvious problem with this as a justification for isolating Qatar. Because if Qatar is the Club Med of terrorism, then America’s other ally, Saudi Arabia, is the Disney Land. After all it was Saudi Arabia that originally propagated the strict, heathen-hating Wahhabist strain of Islam that emerged during the 18th century, and which now underlies the simple-minded doctrine of ISIS and Co. And it was Saudi Arabia that actually produced international terrorists, including 15 out of the 19 9/11 attackers, and even Osama bin Laden himself, an exiled member of the Saudi elite. While it’s true that ISIS itself has never really taken money from Saudi pockets, as its predecessor movement al-Qaeda in Iraq once did, there’s little doubting that the House of Saud was happy for ISIS to overthrow Bashar al-Assad’s Iran-friendly and therefore Saudi-antagonising regime in Syria. No wonder, as a Wikileaked cable from 2009 was to reveal, then US secretary of state Hillary Clinton noted that ‘donors in Saudi Arabia constitute the most significant source of funding to Sunni terrorist groups worldwide’.

Using the war on terror as a justification for backing and, presumably, licensing the Saudi-led attack on Qatar is utterly incoherent. In one breath Trump is talking about ‘ending the horror of terrorism’, while in the other he is ‘negotiating a dubious, possibly apocryphal ‘$110 billon arms deal’ with King Salman, the ruler of a kingdom that has consistently supported Islamist militants (that is, until they started to come home to roost).

So the friction and now conflict between the Saudi-led Arab states and their one-time ally Qatar, a fellow member of the now ironically titled Gulf Cooperation Council, clearly does not have its source in terrorism. Rather, it lies in the infernal power plays of a region, unravelled by Western intervention and the subsequent national, sectarian and tribal grabs for power and influence. The war on terror here has, for the Sauds at least, become a mere pretext for the continuation of this increasingly internationalised power struggle, a simplifying, barely credible overlay imposed on a chaotic, uncertain many-sided conflict, dominated on one side by Iran, which is in turn backed by Russia, and on the other by Saudi Arabia, backed by the US and the West, with Turkey also now playing an increasingly prominent, if ambiguous role.

Qatar’s problem is not its supposed sponsorship of terrorism, then, but its close relationship with Iran, the nation with which it shares its main source of wealth in the shape of a huge offshore oil and gas field. For the Saudi monarchy, the Western-backed military dictatorship of Egypt and no doubt Trump’s motley crew of foreign-policy advisers, the real issue they have with Qatar is that it appears to be fraternising with the regional enemy. Yes, Qatar itself has tried to become a player in the region, launching media organisation al-Jazeera in 1995 with a broadly liberal remit to criticise neighbouring regimes, and backing certain militias in regional conflicts over the past couple of decades. But it is Qatar’s proximity to Iran, the Sauds’ main rival in the region, and the state Trump just last week tellingly also called a sponsor of terrorism, that seems to be driving the moves against it.

And this is what is so concerning about America’s buffoonish intervention in the Middle East: with so many external actors, from Iran and Saudi Arabia to Turkey, the US and, of course, Russia, now sucked into the fray, pursuing their own contradictory agendas, an already destablised situation is rendered more volatile and unpredictable – not to mention taken ever further out of the hands of those who live in the arenas in which the conflicts and battles by proxy take place.

There’s little doubt that the US involvement in the latest conflagration is disturbing, and Trump’s involvement idiotic and capricious (a few weeks ago, he praised Qatar for its efforts to combat terrorism). Yet it’s important to remember that Trump’s foreign policymaking, as clueless and blundering as it appears to be, is not the gamechanger some Western liberals imagine it to be. In supporting Saudi Arabia, arming it and backing it as the West’s key regional force, Trump is merely continuing the approach of his predecessors, who armed and backed it as its tanks rolled into Bahrain in 2012 to put down protesters, and who aided and abetted it as its planes razed Yemen to the ground from 2015 onwards. Predecessors, remember, who powered the unravelling of the region in the first place, changing regimes here, staging coups there. Likewise, Trump’s moral grandstanding on terrorism is reality-defying and dangerous. But Trump did not invent the war on terror. He is merely its most inept prosecutor.

The US, with its allies still at its heels, continues to embolden certain antagonists and inflame conflicts. It seems that Trump’s approach differs only in degree to that of his more sober predecessors, not in kind.