The return of two-party politics? Dream on

The stakes in politics have rarely been higher, especially for us democrats. 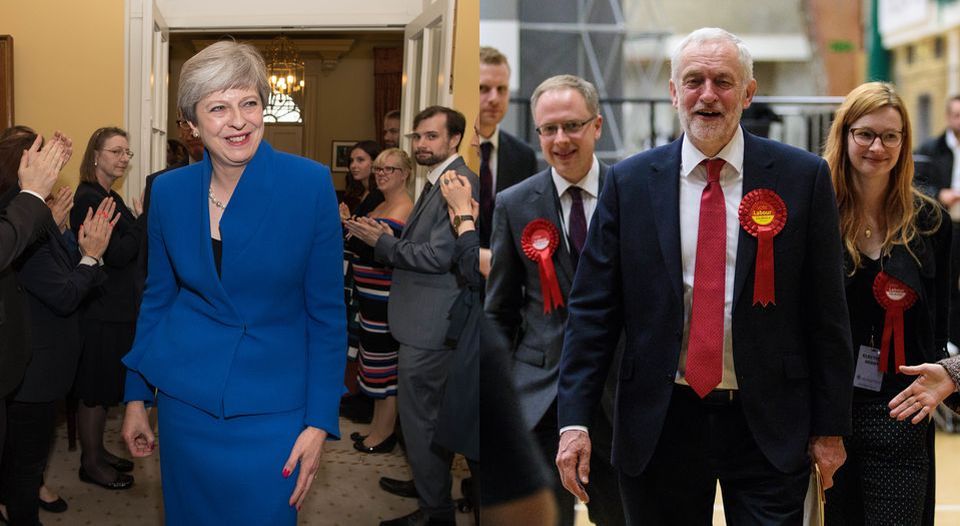 Amid all the gasps over the UK election result, there has also been an audible sigh of relief in political and media circles. And it’s growing louder. It might even turn into the loudest cry of the post-election moment. It’s a sigh which basically says: yes, Theresa May’s failure to get a majority could scupper the Brexit negotiations, and yes Jeremy Corbyn’s gain in seats has rattled and discomfited many, but at least we’re returning to two-party politics. At least British politics, following daft forays into new parties and populist experiments, is anchoring itself once more upon that binary we all like and understand: Blue / Red, Right / Left. Everyone is saying this – and they’re all wrong. The return to two-party politics is entirely illusory.

Within hours of the exit poll being announced, suggesting May had failed to win a majority and Labour had done better than it did in 2015, politicos were wrapping themselves in the comfort blanket of the return of two-party politics. With the routing of UKIP, whose vote utterly collapsed, from 3,881,099 in 2015 to just 593,852 yesterday, and the huge blow to Sturgeon’s SNP, whose vote fell from 1,454,436 to 977,569, with the loss of 21 seats, we’re back to the familiar poles of Tory and Labour, observers say. More than 80 per cent of voters went for one of these two parties: 42.4 per cent for the Tories, 40 per cent for Labour. ‘After three decades of splintering, two-party politics is back’, said one report. ‘British politics has returned to a two-party system on the greatest scale since the 1970s’, says the BBC.

This is a delusion. Those ‘three decades of splintering’ haven’t suddenly ended. Splintering remains the name of the game, even if it now takes place within parties rather than between them, and geographically and generationally as well as politically. The results point not to the return of two-party stability, but to the shakiness of party politics in 21st-century Britain. There’s the inability of the political class even to read the public. The swirling polls of the past week have revealed a mammoth disconnect between the observing class and everyday people. There’s the decline of party loyalty: the shifting of voters to UKIP and the SNP and back again either to Labour or the Tories – and sometimes not to the party they originally started with – speaks to a diminished sense of party attachment.

There is the rise of new constituencies and the fall of others. The creation of whole new and often very changeable party bases. The key reason for the seeming return to two-party politics is not the dynamism of that old arrangement, far less of May or Corbyn, but rather the corrosion of UKIP and the SNP. UKIP, surplus to requirements now we’ve had the EU referendum, lost three million voters, and these returned either to Labour or the Tories (or they didn’t vote). The SNP’s loss of 500,000 voters provided a boost for the Tories in Scotland (and a smaller one for Labour). It isn’t a yearning reorientation of politics around the old poles that we’re witnessing – it is more the blips and shifts caused by the quake of UKIP no longer having a role to play in politics and Sturgeon seemingly being punished for her cynical hubris by an electorate tired of the indyref issue.

More importantly, even where the two parties themselves are concerned, all is flux, all is unstable. The hailing of the return of two-party politics overlooks that these two parties are not what they were. The Tories made some inroads in northern working-class areas, picking up people in the UKIP exodus. (So did Labour, welcoming back voters it had lost in recent years.) Labour did well, in the newer sense, mainly in the south and most strikingly in London, where it even won Kensington and Chelsea. The map in this New York Times piece captures very well the strange shifts in the world of the Two Parties: note in particular the move to the Tories in working-class northern areas and the dramatic turn to Labour in London. Labour’s power, its true electoral engine, is now concentrated in London and other urban, metropolitan areas. This is new. The two parties are the two parties in name only.

They are in many ways new parties, even if they can’t bring themselves to admit it. This is most clear in relation to Labour. Its conscious cultivation of the youth vote confirms its long-term shift away from the class vote: it is now a party of generation rather than work. Its success among high-status, city-dwelling Remainers indicates its continuing post-1980s appeal to the middle classes and urbanites. There is an unspoken two-party tension within this party, between its returning working-class Leavers and its implacably anti-Brexit middle-class backers in the south. My view, and concern, is that given that the southern middle classes and political and media set tend to be better connected and sharper elbowed than working-class northerners, their agitation with Brexit will win out over other Labour voters’ desire for Brexit. It certainly chimes better with the Brexit-suspicious Parliamentary Labour Party and Labour media people.

Indeed, possibly the most striking story of this election is the potential for Labour, and Corbyn of all people, to become a kind of vessel for the reassertion of establishment values and practices that were rejected in the EU referendum last June. The extent to which the vote for Labour was a ‘revenge of Remainers’ is being overstated, because we know Leavers returned to the party, too. But the forces of anti-democracy, from businesspeople using their financial clout to weaken Brexit to the various politicos who have devoted themselves to killing it, certainly spy in the denting of May’s authority and the ascendancy of the Corbynistas an opportunity to slow and maybe stop Brexit.

‘Fanatical Brexiteers have been stopped in their tracks’, says Polly Toynbee. Queen of the anti-democrats Gina Miller says a hung parliament is good for Remoaners like her. New Statesman editor Jason Cowley says a ‘consensus [is] hardening that there will be no majority in the Commons for leaving the Single Market’. That is, MPs, the majority of whom oppose Brexit, see in Corbyn’s gains an opening for reinterpreting Brexit to mean staying in the market – which really means staying in the EU. The EU itself is cheering Corbyn’s rise. The EU commissioner for economic affairs today argued that because Corbyn campaigned on the basis of a ‘softer Brexit’, the election results mean Britain is now ‘in a less simple situation’ regarding leaving the EU.

What is happening here is extraordinary: Corbyn, the self-styled red, long-term agitated backbencher turned accidental leader of Labour, is being looked upon by some in the urban middle classes, the political establishment and the EU itself as a potential check on Brexit; as the man they might call upon to ‘soften’ Brexit and ensure the Single Market is held intact. This tells us two things. First, that the idea of ‘Corbynism’ as anti-establishment is utterly unconvincing. In many ways it is the opposite, where Corbyn is now looked upon to prop up those wings of the establishment that were revolted against last June; where Corbyn becomes a diluter rather than embodiment of anti-establishment sentiment. What a strange role for him potentially to end up with. And secondly, it shows how desperate the EU establishment and its supporters have become. First they looked to French unknown Emmanuel Macron to keep France EU-friendly; now they hope Jeremy Corbyn’s influence will weaken May and encourage parliament to soften Brexit.

Those of us who believe in democracy face a very, very serious situation. Yes, the election results had many positives, not least the drubbing of hubristic Sturgeon and the rejection of May’s ‘I know best’ attitude to Brexit. Such technocrats will not be widely or casually tolerated, and that’s good. But the weakness of hung parliaments, and the circling of the forces of anti-democracy, and the elite’s spying in this new arrangement an opportunity to undermine the mandate of last June means that Brexit has never been more fragile. Behind all the talk of a return of two-party politics – which is largely talked up to provide some comfort to a political set disoriented by recent events and populist revolts – politics is really taking new and fascinating and risky shapes. Questions of democracy and power seethe under the surface. Our Brexit mandate is talked down, alliances are formed against it, the EU wonders how to regain lost ground. Two-party politics? Please. It’s far more interesting, and dangerous, than that. Brexit isn’t won; the battle for it hasn’t even properly begun. Let’s start it, now.