Paris: it’s not the end of the world

We need a serious debate about climate change, not anti-Trump fearmongering. 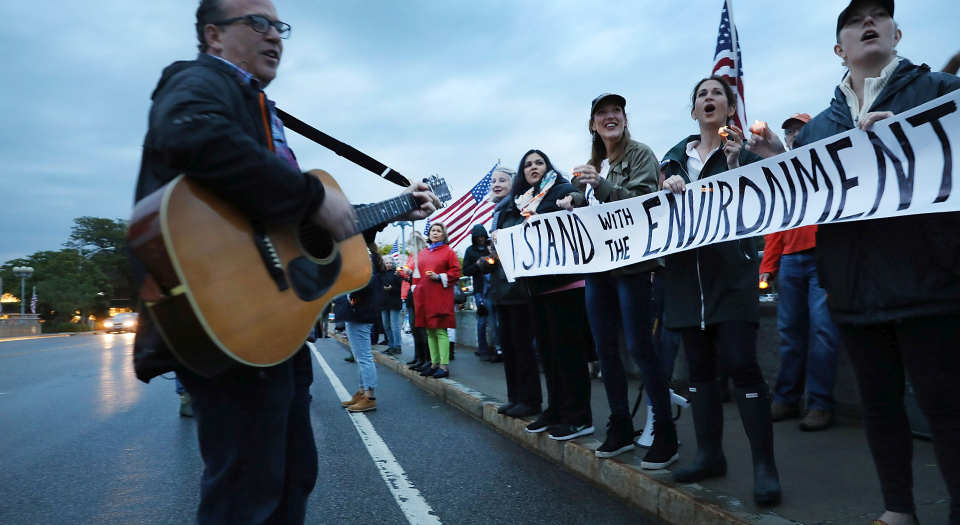 The decision of US president Donald Trump to withdraw the US from the Paris climate agreement was a major setback for this globally coordinated attempt to stem the planet’s rising temperatures. Trump said that pulling out of the Paris accord was necessary to defend US sovereignty. ‘I was elected to represent the citizens of Pittsburgh, not Paris’, he said.

Trump’s move was denounced by the world’s elites, including European leaders, Democratic Party politicians and corporate CEOs. Environmentalists were outraged and predicted apocalyptic consequences. Green evangelist Al Gore called it ‘a reckless and indefensible action’, and environmental activist Bill McKibben said that it ‘undercuts our civilisation itself’.

The hyperbole is hardly a surprise. The discussion of climate change has for too long been characterised by sweeping and false generalisations – it’s either a hoax or Armageddon. Trump’s decision to withdraw from the Paris Agreement, and his critics’ over-the-top reactions, show that both sides would prefer to engage in symbolic gestures, rather than deal with the serious and substantial issues at stake.

Trump’s talk about putting Pittsburgh ahead of Paris is cheap rhetoric. His rejection of the accord might play well with his base, but it won’t bring jobs back to the coal industry, as he promises. And in dropping the Paris Agreement, Trump didn’t offer any solutions to the real problem of global warming. Following Trump’s press conference, the White House stated that the president remains committed ‘to robust efforts to protect the environment’. But without proposing any alternative measures, his words ring hollow.

At the same time, the green elites have over-hyped the importance of the Paris Agreement. The developed nations set unrealistic goals for reductions in their carbon emissions, while China and other developing countries gave vague promises about reversing their rising emissions ‘around’ 2030 or later. And even if all parties kept to their carbon-cutting promises, it would barely make a dent in the problem. As Bjorn Lomborg notes, maintaining temperature rises to below two degrees Celsius requires a reduction of 6,000 billion tons of CO2, but the United Nations estimates that ‘even if every country had made every single cut promised in the [Paris Agreement] to the fullest extent, CO2 emissions would only drop by 56 billion by 2030’.

The New York Times says the accord aims to ‘bind the globe’, but it does nothing of the sort: the agreement is non-binding and there are no enforcement mechanisms. There is a reason why 195 countries signed up to the Paris Agreement – because it is so undemanding. Many environmentalists admit that the agreement in itself would not bring much change, but, as McKibben says, ‘the hope of Paris was that the treaty would send such as strong signal to the world’s governments and its capital markets’. Yet, given the agreement’s minimal impact on atmospheric trends, the ‘signalling’ coming out of Paris was really virtue-signalling on the part of global elites and environmentalists.

The overwrought prophecies of impending planetary doom and destruction that followed Trump’s announcement highlight what is wrong with the debate over climate change. In one sense, environmentalist fearmongering simply hasn’t worked. According to the Associated Press, only 17 per cent of Americans ‘are alarmed by climate change and want action now’. And green elites have been relatively successful in preventing a wide-ranging discussion of how we might address global warming. Emotion and scare tactics are harnessed to make an argument that effectively says: if you care about the environment, the green policy agenda – deindustrialisation, regulation, government subsidies for unimpressive current renewables like wind and solar – is the only answer.

The fact that this agenda has been embraced by elite institutions, and embodied in agreements like the Paris accord, does not make it the right approach. The US – widely portrayed as the worst offender in terms of CO2 emissions, even before the arrival of Trump – is in fact the only country that has reported a significant emissions decline in recent years. This has little to do with the Paris Agreement, and a lot to do with natural gas fracking, something greens have vehemently opposed. The rejection of ‘bridging’ technologies like fracking and nuclear power – technologies that are already reducing emissions and hold out the potential for further advances in the future – reveals that environmentalists are concerned less with carbon-cutting than they are with opposing development (and progress) in general.

We could explore alternatives, such as supporting the development of renewable technologies of the future (beyond wind and solar), and adopting strategies for mitigating the potential worst effects of climate change. Yet these two alternatives hardly get discussed, because they cut against the climate orthodoxy. In particular, these two approaches require more economic growth and more wealth creation, while green policies actually stymie growth, in the name of saving the environment.