Generational revenge: the politics of ageism

The youth vote is being marshalled to punish the elderly. 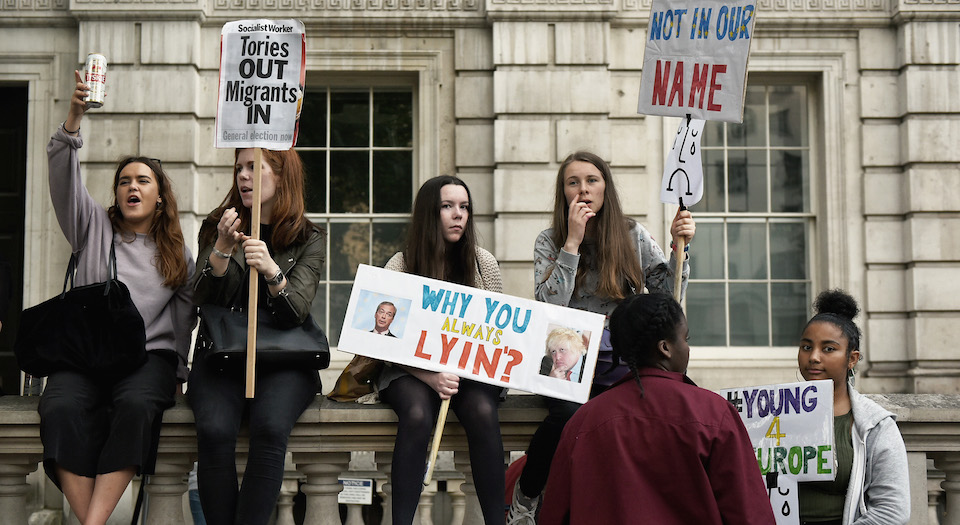 Over the past week, the calls on young people to register to vote in the forthcoming UK General Election have become frenetic. The young would-be voter is being cast in the role of saviour of the nation, possibly putting to right the evils committed by their egotistical elders. I hadn’t noticed the absurdity of this constant incitement to generational conflict until my visiting Hungarian friend asked me when the mobilisation of the youth vote became such a Holy Crusade.

According to a certain media narrative, the young constitute Generation Victim. Their futures have been stolen by their selfish, prejudiced elders. From this ‘blame the old’ standpoint, all the problems of the world are the fault of venal geriatrics, who have literally sabotaged young people’s prospects.

This leads to a situation where the call on young people to vote isn’t couched in the language of democratic or civic responsibility. Rather, it is fuelled by a mendacious appeal to young people’s sense of entitlement. As an editorial in the Daily Record put it: ‘The generation aged between 18 and 30 have been done precious few favours by the ballot-box activities of their elders. They have inherited international uncertainty, low wages, zero-hour contracts, and a political system which, at times, looks broken beyond repair.’

This catalogue of elderly misdeeds ends with a warning that worse will come if old people are not restrained by the wisdom of the young. ‘Unfortunately’, says the Daily Record, ‘it would appear that, if left to their own devices, older voters might just start breaking [the system] even more’.

The most fascinating thing about this Generation Victim narrative is the way it reverses the classic moral contrast between irresponsible youth and their sensible elders. Now, it is the elderly who are depicted as reckless and thoughtless, while the young are treated as far-sighted and thoughtful. The generational worldview has acquired a quasi-religious tone. People repeat it like a mantra. The refrain of ‘old people have ruined the world’ is a prelude to building a 21st-century version of a Children’s Crusade.

It is a sure sign that politics is running on empty when generational revenge becomes central to an election campaign, and when activists invest so much of their emotional energy into flattering the young. Young people have become the political heroes of the revanchist opponents of Brexit. They hope the newly registered masses of 18-year-old voters will be a vanguard against bigoted, Brexit-voting old people. Demography trumps debate. Instead of trying to win the political argument, many seem keen to turn the election into a generational war.

The call on the young to enter into generational conflict with their hopeless grandparents has all the hallmarks of narrow-minded hysteria. It has generated levels of contempt normally associated with anti-immigrant or anti-foreigner campaigns. Old people have become the enemy within; the one group it is okay to vilify.

Uninhibited derision is now heaped on older generations. It is powerfully callous, and it conforms to the classic tactic of scapegoating. Implicitly, this gerontophobia dehumanises the elderly. They are seen, not simply as responsible for young people’s problems, but as unworthy of the kind of esteem given to other groups in society.
This is why, last year, a GQ columnist could go so far as to suggest: ‘We should ban old people from voting.’ And it is why the novelist Ian McEwan appears to believe Britain will be a kinder, better place once the old die off. He informed the audience at The Convention, an anti-Brexit conference that took place in London a couple of weeks ago, that the death of lots of old people in the next couple of years will ensure that the nation will vote Remain if there is a second referendum. In short, these deaths will be good political news.

In Britain, this anti-geriatric venom is a direct outcome of the Brexit referendum. Both during and since the referendum, the media have pushed the idea that past conflicts of interest between rich and poor or between the elites and the people have become far less significant; what’s most important now is the conflict between young and old. Suddenly, age has become the key dividing line in British politics.

The vote for Brexit provoked a severe media and political backlash against oldies who dare to defy the good sense and the needs of the young. As Louise Ridley of the Huffington Post UK explained, in the referendum the young were ‘screwed by older generations’. Numerous commentators claim pro-Brexit geriatrics are ‘stealing the future’ from younger generations. One argument that has been made by many is that because the elderly won’t be around much longer, it is unfair to allow them to influence decisions that will have long-term consequences. That is, they should lose their right to influence the future of society. Cast into the role of second-class citizens, they’re condemned simply for being old.

It has become okay to hate old people. One Guardian columnist says a friend told her: ‘I am worried Brexit has made me ageist.’ The friend confided that, following the referendum, ‘I saw this older couple in the street and just felt this sudden, enormous wave of fury towards them and their generation. It was almost physical.’ It isn’t likely that many young people have such a visceral response to the sight of the elderly. However, these media-promoted outbursts against older people do provide the young with a cultural framework for understanding their problems — and a legitimate target for their frustrations.

The politicisation of intergenerational relations is based on the conceit that young people’s values are more up-to-date than older people’s, and therefore they’re better. Unlike grandpa and grandma, the young are not consumed by clapped-out ideals or prejudices. Apparently, just being young means they have a superior outlook. In an historical reversal of roles, the young are charged with overseeing society, and with ‘improving’ their parents and grandparents by imparting to them some enlightened values. That the young are now seen as civilisers of the elderley is clear from columnist Owen Jones’ campaign calling on young people to ‘ring your grandparents’ ahead of the election and tell them to vote Labour.

The depiction of young people as Generation Victim does them no favours. Instead of appealing to young people’s sense of agency, the victim narrative enhances their sense of entitlement. It encourages the young to conceive of themselves as a singularly unfortunate generation, whose quality of life is likely to be far worse than any other generation of modern times. The rhetoric of ‘stolen future’ gives them a sense that their world will not be a very nice place. After all, once your future has been stolen, what is left but a lifelong feeling of victimisation?

The Generation Victim outlook leads to a politics that is not really about any higher purpose. Instead, young people are instructed to vote as a way of thwarting their mean-spirited elders. The young are appealed to as a group with a narrow self-interest rather than as people who are able to think about and pursue the interests of society as a whole. Generation Victim is a cynical campaign, flattering the young simply for being young and seeking to turn them into voting fodder for anti-Brexit demagogues.