Why the pro-EU establishment desperately needs to revive the spectre of Farage. 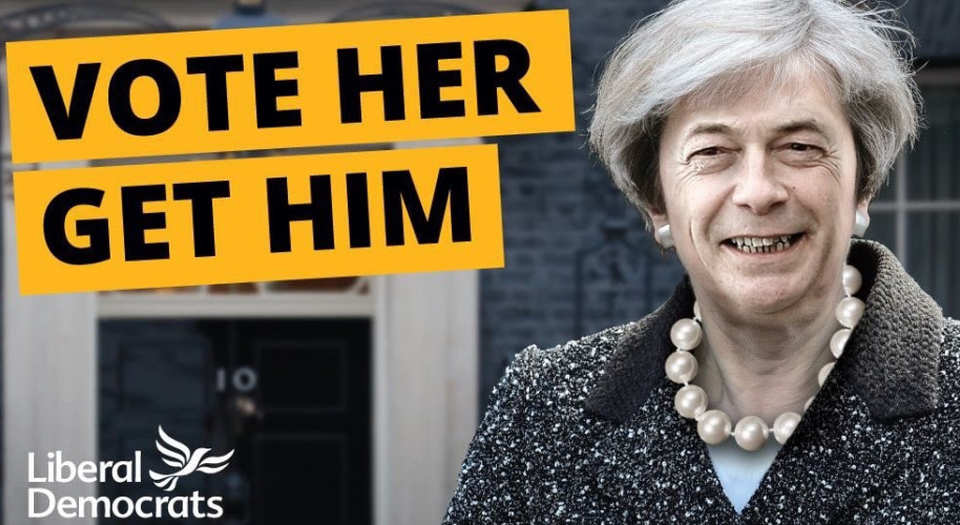 ‘Vote her, get him’, warns the Lib Dems’ new election poster, which features the face of UKIP’s Nigel Farage where Theresa May’s should be, somewhere beneath the frayed grey helmet of hair, and above the pearl necklace. An image of creepy Lib Dem leader Tim Farron himself would only be marginally less attractive than this unholy melange.

But more disconcerting than the image, is the message; that a vote for the Tories is really a vote for UKIP. UKIP? Really?

UKIP, if you remember, was a political party that briefly flourished between 2014 and 2016. Since then, it has lost virtually everything it gained during its brief boom, including: its sole MP, Douglas Carswell; its solitary politician of substance, the grinning, ale-swilling dervish, Sir Nigel of Farage; and, most importantly, almost all of its support – the latest polling figures put UKIP’s vote share at a whopping three per cent.

And yet there the Lib Dems are, warning voters that UKIP, far from being the negligible, inept political force that it has now become, is really alive and well in the body of the Conservative Party. ‘Nigel Farage’s vision for Britain is now Theresa May’s’, said Farron. ‘He has taken over the Conservative Party. Anti-Europe. Anti-refugees. Slashing funding to schools and hospitals. No wonder UKIP is standing down candidates and backing the Tories. After all, who needs UKIP if the government is doing what it wants anyway?’

And the Lib Dems have not gone out on a limb here. The idea that UKIP persists in Tory clothing has become one of the platitudes of mainstream election commentary. ‘The politician [May] who once said that the Conservatives needed to stop being the “nasty party” has now, as leader, annexed UKIP’, tweeted one pundit last week. Another wrote that UKIP is behaving ‘like a facehugger from the Alien films, affixing itself to the Tory Party’s skull and implanting its unlovely ideas’. And another continued the parasites and illness theme. ‘Before UKIP died it infected the Conservative Party, the very movement that helped spawn it and finally gobbled it up.’

It’s odd, isn’t it. At a point when UKIP is about as relevant as its original, largely academic incarnation, the Anti-Federalist League, used to be, establishment voices are still obsessed with it, divining its influence there, seeing its power here. UKIP is dead, they seem to be saying, long live UKIP. It’s as if the likes of Labour, the Lib Dems, and the still largely pro-EU commentariat can’t bear the thought of UKIP’s demise. Not because they secretly like the purple-hued naffness of it all, let alone the policies, such as they were. But because they need UKIP. They need its crass anti-immigrant posters; they need its candidates’ unguarded pronouncements on homosexuals; they need its ‘fruitcakes, loonies and closet racists’. And they need it in all its technicolour inappropriateness, because, against UKIP, they can affirm their progressiveness, their ever-so-liberal values, their rectitude. In UKIP’s myriad vice, they are able – at last! – to see their own virtue.

Without UKIP, that sense of purpose withers. All they’re left with are the increasingly discredited values of the establishment, not the values of the great and the good. So, rather than make a case for the status quo, they find it far easier to posture against the supposed nastiness and cynicism of UKIP. Criticising UKIP’s sometimes repugnant anti-immigrant moves is a gimme; advocating continued membership of the EU, which is currently strangling Greece to economic death with as much zeal as it polices its borders in the Mediterranean, is less so. So at the very moment UKIP is ceasing to exist, its opponents are desperately re-inventing it – in Tory clothing – because their actual Tory opponents are not anti-immigrant or un-PC enough. The real Theresa May, rather than the one in the Lib Dems’ epicene fantasy, is too much like them for the cheap hits to land. Heck, up until the referendum result she was nominally pro-EU, too.

So for Labour-leaning commentators, for anti-Brexit politicos, to give themselves some semblance of moral upstandingness, they are trying to recreate the Tories in UKIP’s likeness, literally in the case of the Lib Dems. They talk of how the Tories have ‘pilfered’ UKIP’s policies (ignoring the extent to which they pilfered Ed Miliband’s!), and of how they are cynically appealing to UKIP voters. That they pursue this demented strategy shows the extent to which they just don’t get what has happened. Having spent so long battling the spectre of UKIP, conjuring it up as the racist, intolerant cyst on the body politic, they really do think UKIP is the powerful, driving force in our political midst, that it drove Brexit, and has, like a grotesque xenomorphic parasite, infected the Tory Party.

What they don’t understand is that UKIP was never really behind UKIP’s rise. It was not so much the driver as the beneficiary of a deep sense of loss among the British public – a sense of loss not just of cultural certainties, of ways of life shamed and demeaned into semi-obsolescence, but a loss more broadly of control. Control, that is, over the direction of one’s life, over one’s employment, over one’s future. And, most pertinently, control over those that rule in our name. Those who turned to UKIP, many of whom used to vote for the mainstream parties, were never racists, or xenophobes, or Faragists or any of the other tiresome epithets thrown vaguely in the direction of those living outside the Metropolitan mindset. They are people who might once have supported Labour, before it stopped listening to, and speaking for, them. People who might once have voted for the Tories, and perhaps feel that they can once again, as it appears to be the only party promising to respect their Brexit vote. They are people, that is, who want something more from politics, something more democratic and engaged.

The Tories aren’t pilfering UKIP’s policies, then. They’re doing something far simpler, and far more fundamental. They are trying, often in spite of themselves, to respond to an electorate that has long since had enough.