Withnail and I and the meaning of life

Thirty years on, this film’s tragedy and comedy speak to us still. 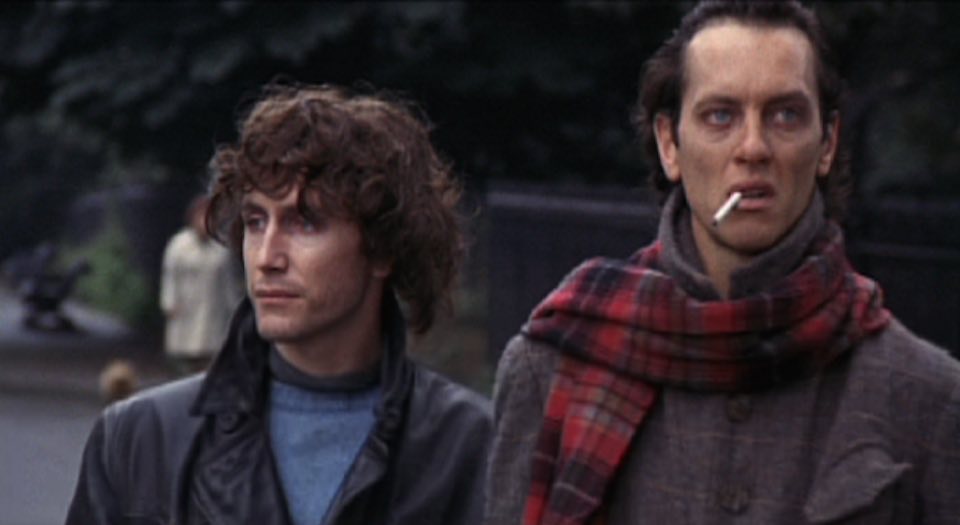 Ever since its release 30 years ago this week, the film Withnail and I has divided opinion. Some find it a meandering, inconsequential and tedious affair. It has no real plot to speak of, beyond that of two drifting, frustrated, drink-sodden actors fleeing their decrepit London flat to escape to the countryside and ‘rejuvenate’. Others adore the movie for the same reason, on account of its very aimlessness and debauchery. The film’s intangibility and mood of unease epitomises the existential crisis confronting Withnail and his companion, Marwood. But one thing is for certain: if you are or have been a student, you will love it.

The film’s appeal to undergraduates is perfectly logical, especially to those in their carefree first year, and certainly to those of us who went to university for free. The world represented in Withnail and I mirrors student life, albeit an exaggerated version of it. There’s the drugs, the anarchy, the alcoholic excess, the killing time in the morning waiting for the pubs to open, staying up all night, the hangovers, the mountain of unwashed crockery in the sink, the squalor and the poverty.

Life for students can be harrowing, it being the first time most teenagers have left home for a sustained period, and the nagging feeling of insecurity and disorder that pervades the film also appeals to undergraduates in unfamiliar surroundings. Students newly ensconced in redbrick universities in the north of England, who often face hostility from locals (mostly deserved), can relate to Withnail when he pleads pathetically to the Cumbrian farmer: ‘We’re not from London!’

Ah, yes – the quotes, the favourite pasttime of every devotee, and the bane of anyone who hates the film. A housemate of mine in Manchester had a friend who was so obsessed with the film that his girlfriend issued him an ultimatum – that she would leave him should he quote Withnail and I one more time. To which he replied: ‘You terrible cunt!’ And it remains an eminently quotable movie. Anyone who’s seen it surely has at least once said ‘I demand to have some booze!’, and, the morning after, ‘I feel like a pig shat in my head!’. Quoting the film to one’s peers also acts as kind of social cement. Many others have also tried recreating for themselves a ‘Camberwell Carrot’.

Yet beyond the drunken frolics of this pair of perfumed ponces, demanding cakes and fine wines, who are chased by a randy bull and told to get in the back of the van – and beyond Uncle Monty’s raving homosexuality – there is a tragedy at the heart of this ostensible comedy. It only makes itself clear at the very end, with Withnail reciting Hamlet’s soliloquy in the park: alone, in the rain, bottle in hand.

In its essence, Withnail and I is a desperately sad film, charting the eponymous character’s path of self-destruction to oblivion. He is a man who is finally defeated by rejection and failure, while his companion Marwood makes an escape at the end, cleaning himself up in both senses after securing an acting gig. ‘Con-grat-ulations’, says Withnail, in the most painful and sorrowful line in the film. ‘I shall miss you, Withnail’, says Marwood, bidding adieu to his friend. ‘I shall miss you too. Chin-chin.’

How Marwood fared, we do not know, but we can guess Withnail’s fate. The alcoholic actor who the character is based on, Vivian MacKerrell, died of pneumonia aged 50. This is the genius of the film. It’s a beautiful tragedy masquerading as a comedy, being hilarious on the outside and heartbreaking on the inside. The function of tragedy is to help us make sense of life, and Withnail and I reminds us that life is capricious and rarely pans out as you planned or expected it. Even poor old Uncle Monty never got to play the Dane.

Leafing through a recent edition of the New Yorker, I see that the magazine is advertising a tank-top with a reinvented image of Rosie the Riveter, as embodied in the 1942 poster bearing the words, ‘We Can Do It!’. No longer a muscular factory worker, Rosie has been updated as an Afro-American or mixed-race anti-Trump protester with one of those vagina-themed pink hats.

How neatly this signifies the degradation of feminism from that which once strove for liberation through action, and which valued strength and muscularity. ‘Anything you can do I can do better’ was its spirit. The New Yorker’s redesign is fitting for our era of recreational, self-regarding, smug, Pepsi-style protests – a spirit epitomised by Saffiyah Khan’s self-satisfied, condescending grin. Feminist protest has become mimsy, upper-middle-class, attention-seeking indulgence, one with an infantile obsession with genitals. ‘Oh look, I’ve got a fanny on my head. I bet you’re SCANDALISED. I’m such a taboo-breaker! SCREAM!’

Mind you, this is the New Yorker we’re talking about, the most snooty, hauty, prole-hating, liberal-left metropolitan magazine in the world.

‘The seaside town Brexit could close down’ – Miranda Kalashnikov reports from Clacton-on-Sea, the quintessential seaside resort that voted to leave the EU.

After spending the morning being assailed by unforgiving North Sea winds, and unable to find a single person – either native or visitor – who will admit to voting Remain, I need a stiff drink. There’s only so much ‘immigrants are taking our jobs’ and ‘we’ve taken our country back’ one can take, especially if you are a caring and compassionate liberal like me.

Honestly. These people. It’s the same old story. It’s all hatred and hostility. These Brexiteers don’t know the meaning of kindness or generosity. They demonise ‘the Other’ because they despise people who aren’t like them. They’re so intolerant. They have no humanity. It’s as simple as that.

I despair of them, I really do. Where’s their emotional intelligence? They’re so low-information and ill-informed – so unenlightened, ignorant and vulgar. Sometimes I wonder if they’re not a bit, you know, mentally infirm, a bit simple. Stupid. Subhuman, even. Yes, that’s right: subhuman. Subhuman scum. The dregs of humanity. The lowest of the low.

What foul deformities! What cunning, secret, invisible, anaemic vampires! Throw them all into the North Sea, I say! Hie thee to hell for shame, and leave this world!