Blundering into a new Cold War

The West’s nostalgic warmongers should be careful what they wish for. 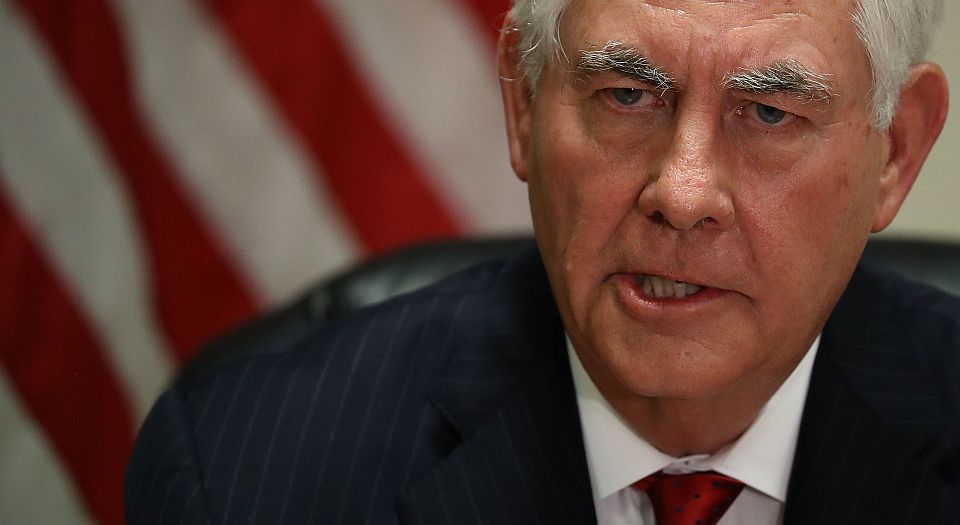 Are they happy now? Those political leaders and observers across the West who have longed for escalation with Russia, for the US to stand up to Vlad the Bad Putin and face down his supposed quest to rebuild the ‘evil empire’, those who shrieked at Trump for saying the single sensible thing he has ever said (that a Russia you meet with and work with would be better than a Russia you flex at and antagonise), have finally got what they wanted. After Trump’s decision to bomb an Assad airbase in Idlib in retaliation to a brutal chemical-weapons attacks for which there is still no real evidence he, or Putin, is culpable, the West and the East are closer to conflict than they have been in decades.

This is reckless beyond belief. As he meets his opposite number in Moscow today, US secretary of state Rex Tillerson says he is seeking not conflict, but a new accord with Russia. He is calling on Putin to ‘realign with the United States, with other Western countries and Middle East countries who are seeking to resolve the Syrian crisis’. He and Boris Johnson’s failure at the G7 talks to secure backing for further sanctions on Syrian and Russian military men may have taken some of the air out of the tires. But the message remains blunt and antagonistic. Russia has ‘given cover’ to Assad’s crimes, says Tillerson. It is to blame for ‘every civilian death’ in Syria, says UK defence secretary Michael Fallon. ‘Russia has a choice to make’, says Johnson.

That Trump’s raid is being celebrated by both liberals and neocons in Washington shows how unhinged the foreign-policy establishment has become. Those who once warned that the erratic Trump should never be allowed near the nuclear codes are now egging on confrontation with a nuclear power. John McCain, GOP senator and king of the Never Trumpers, says last week’s bombing was a ‘good start’. Now he wants more airstrikes, more support for the Islamist-rich Free Syrian Army, and a no-fly zone (which would potentially mean shooting down Russian planes) to show ‘the old KGB criminal’ what for. ‘Putin, who wants political control over neighbouring countries and to be seen as a great global power, is testing President Trump’, reads an ominous New York Times op-ed.

This dark glee is hardly surprising, nor are the Cold War-era insults. Many Western leaders and commentators are never happier than when they are striking poses against a Russia they claim is desperate to restore its imperial prestige. Russia, reads an NYT editorial, is on a ‘revanchist mission’, pursuing a ‘Soviet policy’ aimed at ‘challenging American power wherever possible’. It is time, said UK defence chief Mike Penning last October, to ‘look back to the old foe’. But it is the West, not the East, that longs for the Bad Old Days. The desire for Cold War-era certainty, for a world that made sense, a world in which the West was Good and Russia was Evil, pushes this thoughtless escalation at every step.

The idea of Russia the aggressor, the expansionist, is a fantasy. The most serious and deadly acts of Russian assertiveness in recent years have come after Western provocation. For decades NATO has edged closer and closer to Russia’s border; in July last year, 4,000 troops were deployed to Poland, Lithuania, Latvia and Estonia. The annexation of Crimea came after more thoughtless EU expansionism, and a coup in Kiev that was cultivated and thumbs-upped by Washington and Berlin. And Russia’s intervention in Syria’s civil war only followed the West’s reckless ‘humanitarian’ interventions in the region, including its arming of an opposition that proved even nastier than Assad. Putin is merely out to defend the borders of an increasingly boxed-in Russia and shore up his interests in regions the West has helped plunge into chaos. His interventions have been brutal and bloody, but irrational and hubristic they are not.

We are witnessing history repeated as farce. The Cold War was a means through which the West could assert its strength and its virtue, against the evil Reds in the East. But at least there were competing interests, and competing visions, at stake. That doesn’t hold today. The decrepit Russia poses no real threat, and the stand-off with Putin is driven by something more pathetic: a feeling not of Western strength and virtue, but of Western impotence and uncertainty. The newspaper cartoons and magazine covers depicting strongman Vlad eying the globe are but a dark reflection of the West’s inability to understand, far less control, the world it finds itself in. A world which, ironically, its own thoughtless meddling helped to create.

That it was Trump, the erstwhile ‘Putin puppet’ and isolationist, who brought about this most recent showdown shouldn’t really surprise us. He’s a perennial opportunist who spied a chance to distract from his domestic woes and cue applause from his Beltway critics, and he took it. But we should remember the long, inglorious tradition his theatrics stand in. And we should remember that it won’t be Western politicians who will have to live with the consequences of their warmongering. A hot war with Russia is not on the cards. No, if Trump continues down this path, American-Russian tensions will be fought out in proxy battles over Syria, and perhaps another Ukraine, further unravelling nations in volatile regions. Will the Cold War nostalgists be happy then?