Trump v Syria: the deadly infantilism of the moral warmongers

Why ‘humanitarian interventionists’ never learn from their errors. 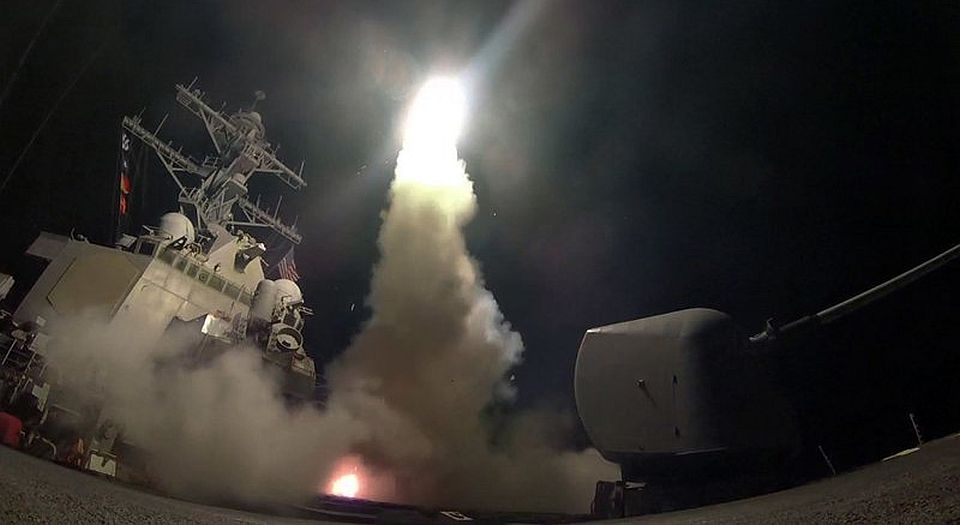 Even as war continues to ravage Iraq, even as Libya remains split asunder by bitter civil conflict, the West’s so-called humanitarian interventionists are eyeing up yet another nation to ‘fix’, another country to save, another people to rescue from horror by plunging them into even greater horror.

This time it’s Syria. It’s now the Syrian people who have the misfortune – and what misfortune it is – to find themselves the objects of Western interventionists’ pity. Following Trump’s bombing of a Syrian airbase, there’s a lot of talk of toppling Assad and delivering Syria into a new era of freedom and democracy. That such moral interventionism not only didn’t work in Iraq and Libya but in fact made those nations measurably, horrifically more worse off than they were is not even considered. It’s immaterial. This is one of the greatest, and deadliest, curiosities of the 21st century: the inability of the new interventionists to learn from their errors.

Trump’s bombing of an airbase following Assad’s alleged use of chemical weapons against civilians in Khan Sheikhoun has had an extraordinary impact on both Western politics and international affairs. In the West, it has had precisely the effect the Trump administration was transparently hoping for: it has boosted Trump’s legitimacy in the eyes of the Washington establishment and media. Fareed Zakaria, global analyst and moral conscience, or at least platitude producer, of DC’s liberal set, said ‘Trump became president of the United States’ with his bombing of Syria. Former Obama officials said Trump was ‘right’. A leftish TV presenter said the attack was ‘beautiful’. Even the New York Times, at war with Trump for months, praised Trump for using his ‘heart’. In the words of the Nation, these observers really ought to ‘sober up and stop being besotted by “beautiful” missiles’.

On the global stage, the attack had the impact that anyone who thinks with their brain instead of their heart could easily have predicted: it shook the world order. It put the US on a war footing with Assad’s allies, Russia and Iran. Within hours, international relations had deteriorated. The spectre of the Cold War – of that never-ending stand-off between a good West and a foul East, with all the regional tensions and conflict this stand-off always stirs up – loomed large once again.

Trump’s ambassador to the UN, Nikki Haley, did the TV rounds, ominously warning Russia and Iran that ‘nothing is off the table’ in America’s dealings with them, including tougher sanctions – and maybe more. Russia and Iran said they will ‘respond to any aggression’ by America in Syria. Perversely, some Western observers seem to welcome this return of the zombie Cold War, of threats and tension and conflict between some of the most powerful nations on Earth. This is because they are desperate for a familiar political framework through which to make sense of the world and their moral place within it. So what if the resuscitation of the Cold War causes instability, and more war, so long as it lets us feel that we’re on the side of Good again; that it’s the 1950s once more and everything feels recognisable and logical and ordered.

These two developments from Trump’s bombing – the improvement in his domestic fortunes and the increased tension in world affairs – sum up the shallowness and the danger of the new moral interventionism. This interventionism is a kind of gesture politics, though using the machinery of war rather than mere press releases, driven by an urge among Western politicians to appear strong and resolute overseas where they are incapable of doing so at home. The political neediness and low emotionalism of this interventionism was brilliantly, and horribly, captured in the image of Haley holding up photos of dead Syrian children at the UN. Translation: we are good, we care, so change your minds about our administration. It’s the marshalling of foreign people’s misfortune to the end of domestic politicking. It is a spectacular failure of critical faculty that so many observers are lapping this up.

And the global instability that has followed Trump’s bombing points to the new interventionism’s lack of, in fact rejection of, any serious analysis of the likely consequences of military action or even intelligent consideration of one’s own interests in world affairs. All that counts is the moral performance, the militarised gesture of strength and seriousness, the attempted recovery ﻿of one’s domestic standing through showy engagement in a foreign conflict. Cool geopolitical thinking, rational analysis, takes a distant second place to the need for moral rejuvenation.

And so the fact that Trump’s bombing seems to have undone the recent cooling of American-Russian tensions, and appears to have unravelled recent Western efforts to bring Iran in from the cold, and seems likely to intensify the conflict in Syria by internationalising it even further – so that it is now even more clearly a bloody mess of a proxy war between a White House keen to maintain its moral authority in the world and a Kremlin desperate to defend its interests in the region – doesn’t matter. All that matters is the gesture, not the fallout. All that counts is the PR benefits, the positive reception at home, not the make-up or future of world affairs.

The new interventionism reduces swathes of the world to a stage on which Western politicians and observers might perform their seriousness and gain some sense of moral meaning in their lives. And this is why, like children, like moral adolescents, they never – but never – learn from the terrible errors of their interventions. This is why even though there is war and terror in the former targets of their moralistic, military largesse right now, in both Iraq and Libya, they can casually move on to talking about toppling Assad and ‘freeing’ Syria. Haley has hinted that the removal of Assad will come soon. Many Western observers, those who call themselves ‘humanitarians’ despite having cheered the interventions that unleashed barbarism in Iraq and Libya, are urging this, are calling for the toppling of Assad in the belief that it will liberate Syria. Of course it won’t. It would do to Syria an even more horrendous version of what moral interventionism has already done to Iraq and Libya: create a gaping vacuum of authority into which misanthropic, seventh-century Islamists and various regional actors with not very good intentions would spread and increase their influence.

They must know this? They have surely seen that this is what happened in Iraq and Libya? Perhaps. But they block it out. Because it’s the moral gesture alone that counts. The almost religious sense of moral fulfilment they get from ‘saving’ nations – even though those nations come to be destroyed – takes precedence over everything. That sense of being engaged in a cosmic moral battle on the side of good, such a relief from the drabness and smallness of domestic politics in 2017, is paramount. They prize their own sense of moral self-worth and political self-esteem more highly than global stability and the basic, humanist ideal of not making unfree nations even worse than they are. The narcissism is staggering. This is the lethal moral infantilism of the new interventionism: the feelings of Western observers become more important than the lives of foreigners.