Sorry, Juncker, the EU is nothing like the US

The difference between the two unions? Democracy. 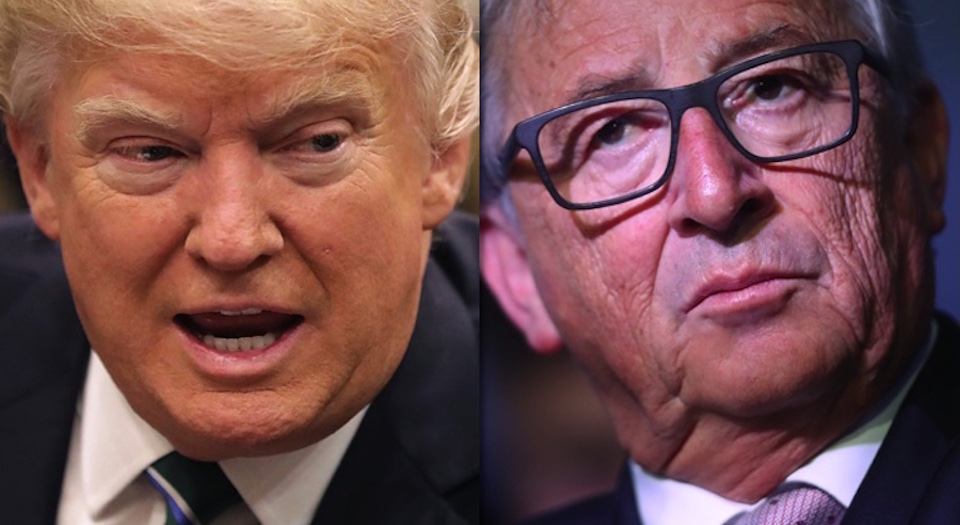 The president of the European Commission, Jean-Claude Juncker, has warned US president Donald Trump that he should be more supportive of the EU. If Trump continues to support Brexit, and disparage the EU in general, Juncker says he will promote secession in Ohio and Austin, Texas.

Juncker’s threats should not be taken seriously. There isn’t even an inkling of secessionist feeling in Ohio. Vermont, which does have a secessionist movement, albeit a small one, would have been a better choice. Texas, meanwhile, has a history of independence. But Austin is probably the least secessionist city in the state. If given the choice, the liberal electorate of Austin would probably prefer to secede from the state of Texas than from the union.

Juncker has a history of saying and doing bizarre things. (Just watch this video of a sozzled Juncker slapping European leaders.) But this implicit comparison between the US and the EU is telling – he clearly views the two unions as analogous. And he isn’t the only one. Both EU supporters and Eurosceptics say the end goal of the EU project is a ‘United States of Europe’. During the stormiest days of the EU’s debt crisis, many commentators also drew parallels between the two unions – both have wealthy, northern states that provide fiscal support to their poorer, southern states.

But while these parallels exist, there is a fundamental difference between the two unions. They are born out of very different ideas, with very different founding philosophies – particularly in relation to democracy. The US is founded on the principle of self-determination and self-rule. This is expressed in the first few words of the preamble of the US Constitution, which starts with ‘We the people’.

This sentiment is expressed even more clearly in the US Declaration of Independence, upon which, as the late author Harry Jaffa argued, the whole enterprise of the US and its experiment in self-rule rests. It declares that all men are created equal, and so governments can only derive their ‘just powers from the consent of the governed’. From this doctrine flows the fundamental idea that the people are sovereign.

The EU, by contrast, is founded on a fear of popular sovereignty. In the eyes of EU ideologues, self-governing nation states are dangerous things. From this misanthropic perspective, democratic sovereignty is not a moral imperative, it’s a frightful thing with the potential to end in genocide and tyranny. Juncker’s European Commission, which is wholly unelected, is testament to the EU’s desire to keep politics out of the reach of the masses.

The Hudson Institute scholar John Fonte has argued that, in the West, there are two competing visions for how our world should be ordered. On the one hand, there are those who believe in self-governing, democratically controlled nation states, as articulated in the Declaration of Independence. (Fonte dubs this ‘Philadelphian sovereignty’, which is where the Declaration of Independence was penned.) On the other hand, there are those who believe in ‘transnational’ or global governance. (Not to be confused with a ‘global government’, which exists only in the minds of InfoWars fanboys.)

Those who believe in ‘transnational governance’ think that Philadelphian sovereignty is either impossible or undesirable. For these people, while governments and states may still have their own laws and peculiarities, popularly elected governments should never be the highest authority. Instead, in the words of Walter Russell Mead, popular sovereignty should fit within ‘an increasingly dense framework of commonly agreed upon laws and norms and an increasingly effective web of global institutions [which] supplement, and in many cases replace, the authority of national governments’. This is the founding principle of the EU.

Indeed, the EU now promotes itself as a model of global governance. While reporting on the G20 summit in 2009, Financial Times writer Gideon Rachman said the EU was presenting its ‘brand of supranational governance as a global model’. The summit, he said, ‘was strangely familiar’ – he felt like he was in Brussels: ‘The leaders’ dinner the night before the summit; a day spent negotiating an impenetrable, jargon-stuffed communiqué; the setting up of obscure working groups; the national briefing rooms for the post-summit press conferences…’. While the G20 is not a governing institution, ‘the kernel of something new had been created’.

That something new is transnational politics, and the EU is now the model for transnational governance – a prototype for those who dream of a world where democratic nation states are a thing of the past.

Philosophically, the US is the opposite of this. It hasn’t always lived up to its democratic ideals. Following the birth of US democracy, many in the new political elite worked to introduce checks and balances to place limits on popular democracy. And the US has also violated other nations’ right to self-governance in the past. Nevertheless, one of its founding principles is the idea that the people should be sovereign, with no outside institutions lauding over them.

Brexit should be viewed in this context: in the struggle between those who believe in popular sovereignty, or Philadelphian sovereignty, and those who prefer politics to be controlled by supranational institutions. The Brexit vote wasn’t just a rejection of the EU, it was a rejection of the idea that distant institutions, aloof global conferences and opaque bureaucracies should govern our affairs and decide the laws by which we live.