The art of revolution

The RA’s Russian Revolution show captures the idealism of 1917 – and the gloom of what followed. 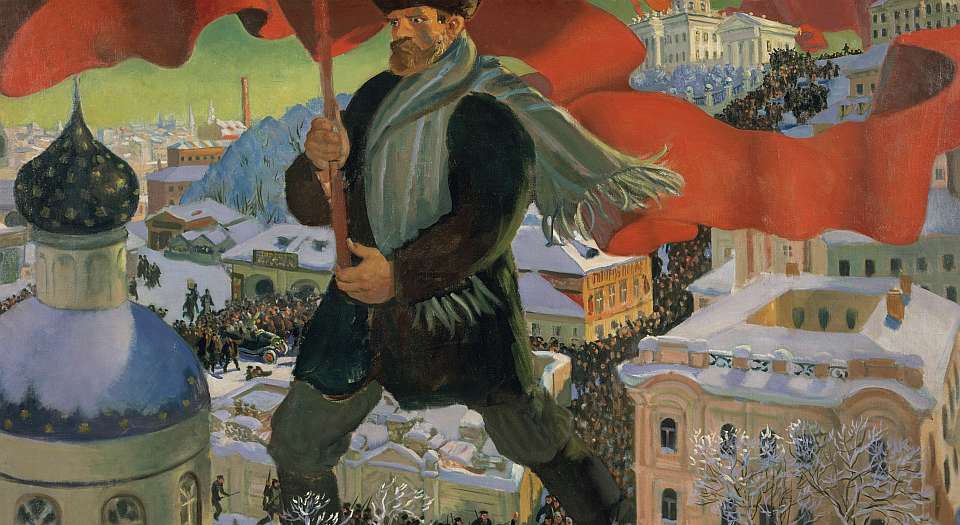 Outside the Royal Academy of Arts on Piccadilly, a statue of Sir Joshua Reynolds has him with brush and palette, a martinet. Looking down on him, till the Spring, is a banner with some hard-to-read rubric about the RA’s exhibition Revolution: Russian Art 1917-1932, mounted on Boris Kustodiev’s unjustly celebrated The Bolshevik (1920).

The two pieces anticipate the mixed results inside. On the Saturday afternoon I went, you had to wait up to 40 minutes to get in, the floors were so crowded. It was hard to see paintings, crockery and other exhibits, but in the jostling you could hear some animated murmurs about Stalin.

The first thing that strikes the viewer is the contrast that pervades the whole show. On the one hand there is Isaak Brodsky’s large, classical, ill-rendered Lenin and Demonstration (1919). Brodsky has Lenin with a twinkle in his eye, almost but not quite drawing aside a red velvet curtain, in hammy style, to reveal a faithful, faceless horde of workers and sailors. It’s ridiculous: Lenin as magician, complete with stage army. Against this, there’s a cup by Mikhail Adamovich, just 9.4cm high, with a sharp-featured portrait of a youthful, attentive Leon Trotsky, the leader of the Red Army. Its inscription is ‘Red Army – Workers’ Defence’. The portrait may make Trotsky too handsome, but the whole piece is exquisite.

In this contrast between the exquisite and the ridiculous lies both the eventual fate of the revolution and the idealism that attended its birth. Either there’s Isaak Brodsky’s famous, monumental homage, Lenin in Smolny (1930) – dire, drab, tawdry in the greyness of its interior. Or there are the hopeful, rural motifs on the plates of Sergei Chekhonin and Elizaveta Rozendorf, depicting the exemplary State Porcelain Factory, Petrograd (subsequently Leningrad, now St Petersburg).

The star, sheaf of corn and blue-sky sickles of Chekhonin’s plate of 1922 are beautiful. They bear the rather fierce inscription: ‘He who is not with us is against us.’ But the ceramic pieces here are more vibrant with every year that passes. Many of the most notable are by Nikolai Suetin. They include his hilarious, ultra-dynamic Suprematist Inkwell (with a Disc) with Removable Cover (1923).

In and beyond ceramics, the really transcendent work mounted here comes mostly from the period 1917-24. The year 1924 began with Lenin’s death, and Trotsky himself identified it as the beginning of the counter-revolution.

Of course Russians created great works of art after that date. The room given over to the founder of suprematism and mentor to Suetin, Kazimir Malevich, is a delight. His geometric coloured wedges stretch from before 1917 right through to 1932. There is Alexei Shchusev’s imposing Lenin’s Mausoleum (1929) – slate grey, black and brown. I also quite like Alexander Deineka’s spooky The Defence of Petrograd (1928) – even if his other paintings here, both before and after that date, are a bit grating.

But, though it’s clear that art doesn’t follow society slavishly, and that artists have often proved able to do good work under a bad regime, there’s an evident discontinuity between the artistic brilliance that broke out before Stalin’s ascension to power – symbolised by him organising Lenin’s funeral in 1924 – and the later shift towards the dismal practice of ‘socialist realism’ in art. In general we revel in Rudolf Vilde’s plate with the legend ‘Workers’ Victory 25 Oct’ (1919), or in Lyubov Popova’s Space-Force Construction, oil with metallic powder on plywood (1921). We admire Natalia Danko’s porcelain Woman Embroidering a Banner (1919) more than we do her later porcelain figures. The verve of the poet, artist, actor and playwright Vladimir Mayakovsky is unmistakable in his cartoonish agitprop posters Enemies Surround Us (1921), in which he ridiculed the English bourgeoisie. And by contrast, the early graphics genius of El Lissitzky, not featured, flares brighter in the memory than his Design for an Apartment for the Narkomfin (People’s Commissariat of Finance) Building (1932), realised here in a fascinating but somehow disappointing room-set.

Once Stalin had politically triumphed against his principal left-wing critic, Trotsky, it would only be a matter of time before Nikolai Demkov’s Kerchief with Portrait of Lenin in the Centre (1924) had the sketch of Trotsky on its bottom left cut out with a pair of scissors. Indeed, the fake news of the Stalin era is directly on offer here. Stalin as the Glorious Leader (unknown artist, 1928) is a dark red-and-black plate made of papier mâché, with lacquer, tempera and gold paint. It portrays its hateful hero in a military coat and cap, and makes him at least seven feet tall. In fact, Stalin was just 5’5”.

So are mendacious, bureaucratic, authoritarian forms of art, like forms of rule themselves, the predetermined result of any attempt at revolution? Well, few now know of the imperialist interventions that so exacerbated the Russian Civil War of 1917-22. Few debate the market-orientated New Economic Policy (1921-28). And yet, stripped of these crucial contexts, it is impossible to mount a convincing argument that the bright palettes of Russia after 1917 could only be succeeded – had to be succeeded – by gloom and disaster, in the creative arts as much as in life.

The rooms for the Royal Academy presentation are pleasingly tall caverns, but the overall organisation isn’t too clear (the shop, though, has much to tempt). Though I’ve seen worse, the captions are often tendentious. For instance: ‘After the Revolution the Bolsheviks eradicated the Russian Orthodox Church’ (my emphasis). The movie clips, from Dziga Vertov and others, generate big audiences but, in their truncated form, give us only fleeting impressions.

Yet having said all this, the exhibition is full of gems. The Lenin of Moisey Nappelbaum’s 1922 photograph is nothing like the socialist-realists portrayed him: he’s sharp, thoughtful, with a forehead like the moon – not avuncular or over-decisive, as those who lionised him always suggested. Abram Shterenberg’s photo of an impossibly mad and good-looking Mayakovsky can only raise a laugh. And there are two lovely pieces of textiles: Vladimir Maslov’s Tractor (1925), in chintz and cotton, full of red agricultural machinery in fields, garlanded with fruits, and Sergei Burylin’s Tractor (1920s), where machines in repeat are roller printed in red on to calico, to great effect.

Toward the end of the exhibition, suspended from a ceiling in the dark, all on its own, is a heroic reconstruction of Vladimir Tatlin’s giant sculpture, Letatlin (1932), which appears part bird, part plane. Till the very end, Russian revolutionary artists made great things, and put more and more of the emphasis on making. As an essay by John Milner called ‘Kazimir Malevich’, featured in the book of the exhibition, reminds us: ‘Throughout the 1920s Malevich, Lissitzky, Suetin and Chashnik all worked on projects that moved from architectonic prototypes towards the realisation of actual monuments and buildings.’

That’s instructive. Nowadays, much of architecture and design is consumed by artistic and environmentalist pretension and abstruse theory. After 1917, by contrast, Russian artists preferred to veer towards the world of practical design, production, innovation.

Now these works are poised to outlive the Russian Revolution by a second century.