No, Hitler was not democratically elected

On the anniversary of the Reichstag Fire, let’s defend democracy. 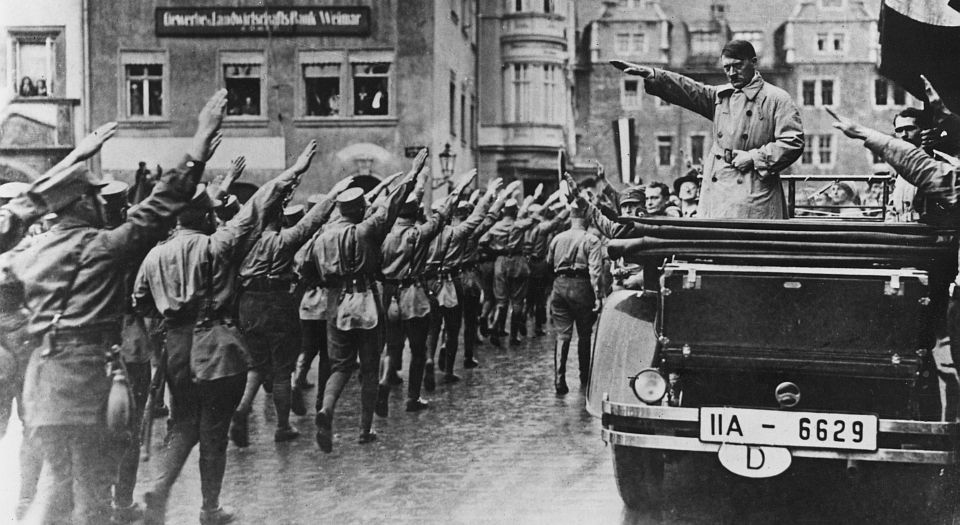 Today is the 84th anniversary of the Reichstag Fire, when the German parliament was set ablaze and Hitler used this act of ‘terrorism’ to institute years of Nazi rule. And the ever-more febrile critics of President Trump are busily citing it as a warning from history; a hot, crackling reminder from the past of what happens when demagogues become desperate to consolidate their power.

Having suspended Godwin’s Law and shamelessly made the political exploitation of the Holocaust into a casual, everyday thing, some of Trump’s critics claim the tangerine tyrant in the White House is probably on the lookout for his own ‘Reichstag moment’. ‘The Reichstag Warning’, says a headline in the New York Review of Books, over a piece wondering if Trump, like Hitler, might use the ‘moment of fear and grief’ after a future terror attack to change ‘the pulse of politics’. ‘Could there be an American Reichstag Fire?’, asks one radical journalist. After all, Trump uses ‘megalomaniacal rhetoric’ and has ‘radicals in his entourage’, so he is basically Hitler.

‘Tomorrow is the anniversary of the Reichstag Fire, when Hitler cried “terrorism” and brought an end to democracy’, said Anne Applebaum, journalist and professor of world affairs, yesterday. She was making a clear nod to Trump’s antics. It’s a sign of the intellectual torpor provoked by the meltdown over Trump that even professors – and not just hacks looking for a punchy headline – now marshall the Holocaust and its antecedents to the end of scoring a point against the White House.

But these exploiters of Nazism, this Trump-is-Hitler brigade, really ought to know better than to talk about the Reichstag Fire in the same breath as Trumpism. Because that historic incident really shows how shallow and unconvincing and opportunistic is their feverish Hitler talk in relation to Trump.

In particular it explodes one of the key hysterical claims of the intellectual elite post-Trump, and post-Brexit too: that Hitler was democratically elected, and that this demonstrates that democracy can very easily give rise to dictatorship, and even to mass murder. The facts of the Reichstag Fire utterly shoot this claim down. Hitler was not elected in anything like a democratic fashion – at least not in the eyes of us who understand what democracy is.

The fire took place on 27 February 1933. It was allegedly started by a Dutch communist called Marinus van der Lubbe, who was tried for arson, found guilty, and executed on 10 January 1934. Many historians suspect that the Nazis started the fire, or encouraged van der Lubbe to do so. No matter – what is not in dispute is that the fire became the founding event of Nazi rule. It took place just a week before the federal elections, on 5 March 1933, and the Nazis cited the terror of the fire as a justification for suppressing and crushing much of their left opposition in the days before the election took place.

At this point, in early 1933, Hitler was chancellor of Germany but he had not been elected to that position. He had tried to become president in the 1932 presidential elections, but he lost to Paul von Hindenburg. Hindenburg got more than 19million votes; Hitler got 13.4million. Yet Hindenburg had a troubled presidency and struggled to find a chancellor he could work with. In January 1933 he appointed Hitler. Elections were called for early March. Then, at the end of February, came the fire, and everything changed.

The Nazis unleashed terror and authoritarianism against their political opponents. Claiming the fire was proof of a vast communist plot to take over Germany, Hitler convinced Hindenburg to pass the Reichstag Fire Decree immediately after the fire. The decree effectively ended civil liberty in Germany. It stated that ‘the Constitution of the German Reich [is] suspended until further notice’. It made it ‘permissible’ to restrict ‘the rights of personal freedom, freedom of expression, including the freedom of the press, the freedom to organise and assemble, [and] the privacy of postal, telegraphic and telephonic communications’. It also made it exceptionally easy for the police and paramilitary groups to obtain ‘Warrants for House Searches’.

In short, the decree brought to an end the right to distribute political literature, to hold public meetings, and even to send political materials to people via the post. It made it impossible for people freely to engage in the business of politics, to be democratic citizens. Worse, the decree was accompanied by a campaign of Nazi terror against opposition parties. Nazi storm troopers used violence to make politics all but impossible. Both the Communist Party (KPD) and the Social Democrats (SPD) were targeted: their meetings were broken up, their literature confiscated. Trade unionists were attacked. Within days of the fire, thousands of political activists had been arrested and detained. Then the election took place.

It was in this climate – through the destruction of democracy, not the enacting of democracy – that Hitler was elected. Having lost seats in the November 1932 federal elections, the Nazis gained seats in these 1933 federal elections, in the atmosphere of tyranny and terror they had created. Hitler won, and held all the power: he shortly passed the Enabling Act, giving himself dictatorial powers.

‘Hitler was democratically elected, you know’ has been the favoured cry of both Brexit-bashers and the Trump meltdown lobby in recent months. ‘Adolf Hitler was elected too’, as one headline about Trump puts it. ‘Hitler was democratically elected… à la Trump’, says one left-wing columnist, claiming ‘the trouble [in Germany in 1933] was not enough people saw the monstrosity of [Hitler’s] hate-fuelled politics’. The dumb electorate, then and now. ‘Democracy often brings fascists to power – it did in Germany in the 1930s’, says British historian Simon Schama of Trump.

But democracy didn’t bring Hitler to power: a war on democracy did. It was the use of terror against democracy, against free, open, democratic debate, that ensured Hitler’s victory. It was the violent suspension of the means of democracy – freedom of expression, freedom of assembly and the right to vote (denied to the vast numbers who were arrested) – that enabled Hitler to win. As to the idea that ‘not enough people saw the monstrosity of Hitler’ – this paints a picture of Germans as wide-eyed idiots lapping up Nazism, when in fact vast swathes of them were being silenced, arrested, punished or killed over their political views, making their ability to engage in political life pretty bloody difficult.

Today’s talk of Trump and the Reichstag Fire is embarrassing not simply because it is yet another ugly, cynical use of Nazi imagery to drive home a political point, but also because the fire and its consequences in fact disprove the idea that the 1930s have returned. In particular the fire dispels the deeply prejudiced, elitist idea that democracy can give us fascism; that the demos should not be trusted with deciding things like the future of the EU, or even with picking the president of the United States, because, as Hitler’s victory reminds us, ordinary people are stupid and violent. No. Nazism reminds us what happens when democracy and freedom are destroyed, when they are treated as negotiable commodities. It is not the enacting of democracy that should make us think of the 1930s – it’s the casual disregard for it among those who conceive of themselves as better and more clued-up than the rest of us.