Bannon is no more a fascist than Obama was a Marxist. 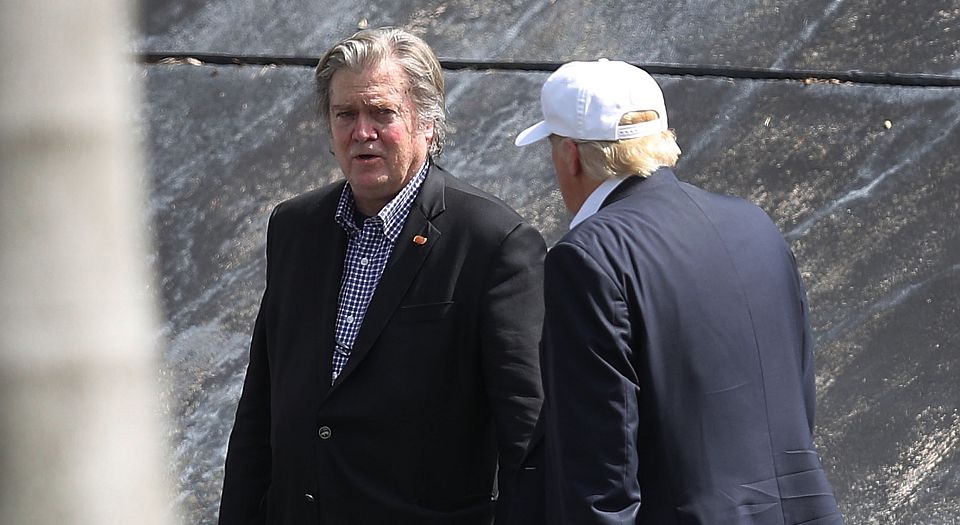 When Obama was first elected in 2008, sections of the US right went into overdrive to prove that behind the smooth talking and smile there was something more sinister. Some conservative media outlets believed Obama was secretly a radical socialist – a Marxist, even. Tied to him were said to be various radical left-wing people, groups and ideologies.

His time as a ‘community organiser’ in Chicago was offered as proof of his subversive past. He was said to be a disciple of Saul Alinsky. His ties to Bill Ayers, a former member of Weather Underground, were brought up. He was said to have once been a member of Democratic Socialists of America, a fairly mild social-democratic group. Some less than savoury things that Obama’s pastor once said were also offered up as proof. The pastor, Jeremiah Wright, had said America brought 9/11 upon itself: the kind of thing every edgy teenager was saying in the mid-2000s. Wright’s supposed radicalism must surely have infected Obama’s thinking.

Members of his administration were scrutinised for past political affiliations and views. Van Jones was forced to resign from his post following accusations that he was involved in an obscure Maoist group in the 1990s following the Rodney King riots. One aide was forced to resign due to having once said that Mao Zedong was one of her favourite political philosophers.

Most memorably, Fox News host Glenn Beck would wheel out his chalk boards. Upon them he would place various supposedly subversive figures and groups, all connecting back to Obama, giving the impression of some deep conspiracy of socialists and black radicals, all connected, with Obama as their secret man at the helm, attempting to bring down the republic. To top it off, that the sad rump of the Communist Party of America celebrated Obama’s election was also offered as a piece of the puzzle.

The idea that Obama was a secret Red with an administration filled with Maoist revolutionaries was obviously nonsense. The conspiracy theories were roundly mocked by left-leaning commentators. Glenn Beck, the most prominent booster of these conspiracy theories, was denounced as unhinged and crazy. He soon descended down the rabbit hole of FEMA death camp conspiracy and lost his gig at Fox News. It was all rather silly and quite funny at times.

Now though, the new president seems to be the subject of such conspiracy theorising, with webs being spun that include members of his administration and neo-reactionary and fascist philosophers. Only this time the conspiracy theories come from the left. Where some right-wingers tried to implicate Obama in a communist conspiracy, some leftists seem intent on proving the existence of a fascist conspiracy. Chiefly, this has focused around the supposed dark influence of Stephen Bannon, the former boss of Breitbart News and now Trump’s chief strategist.

The New York Times has attempted to connect Bannon to the Italian reactionary thinker, Julius Evola. Bannon made ‘a passing reference’ to Evola in a speech a few years ago, the Times notes. Making a passing reference to influential philosophers – even if they are as reactionary and repellent as Evola – is not really proof of anything, certainty not ideological affinity with them. But the Times managed to find someone who thinks it is. ‘The fact that Bannon even knows Evola is significant’, it quoted Mark Sedgwick, a leading scholar of Traditionalists at Aarhus University in Denmark. That Bannon knows a thing or two about early 20th-century philosophy is apparently proof of something significant. What exactly, we are not told. Readers are invited to draw their own conclusion — ideally that this is proof that Trump’s man is probably a fascist, and so Trump might be, too.

So the Times has been able to tie Bannon with a thinker celebrated by fascists, by association implicating Trump (no one of course thinks Trump knows who Evola is). And as a result, clickbait headlines further portraying Trump as a fascist can spring up. ‘Meet the philosopher who’s a favourite of Steve Bannon and Mussolini’, reads one. With less showmanship, the Times is doing what Beck once did.

Next, both Politico and the Atlantic have attempted to tie Bannon (and therefore Trump) to an obscure online movement called the Dark Enlightenment. This oddball movement, largely non-existent outside the darker cesspits of the internet, argues that democracy does not work. Democracy, their leading thinker Curtis Yarvin argues, should be replaced with a carmelist state, similar to Frederick the Great’s Prussia. It’s pretty out-there stuff. Politico, citing an anonymous source, has attempted to connected them with Trump, alleging that Bannon has had contact with Yarvin. Bannon is also reported to have read his works, as if reading stuff is automatic proof of agreement.

The Atlantic has got very excited about this. ‘The fact that Bannon reportedly reads and has been in contact with Yarvin is another sign of the extent to which the Trump era has brought previously fringe right-wing ideologies into the spotlight’, a writer there says. The magazine then sheds more light on the Dark Enlightenment ideology than Bannon ever has or ever will.

Just as Beck did in 2009, some members of the liberal media are attempting to connect dots and spin conspiratorial webs. An Obama aide saying she has a soft spot for Mao, Van Jones once being a communist or Obama once knowing ageing 1970s radicals was not proof of a Marxist conspiracy in the White House. And likewise, just because Bannon knows who Evola is or has read Dark Enlightenment stuff is not proof of fascism descending on Pennsylvania Avenue. With the White House once again occupied by a Republican, the left appears to be going down the same kind of conspiracy-theory route that once devoured sections of the right.

Tom Bailey is a spiked columnist.