Calling Trump a Nazi is its own kind of Holocaust denial 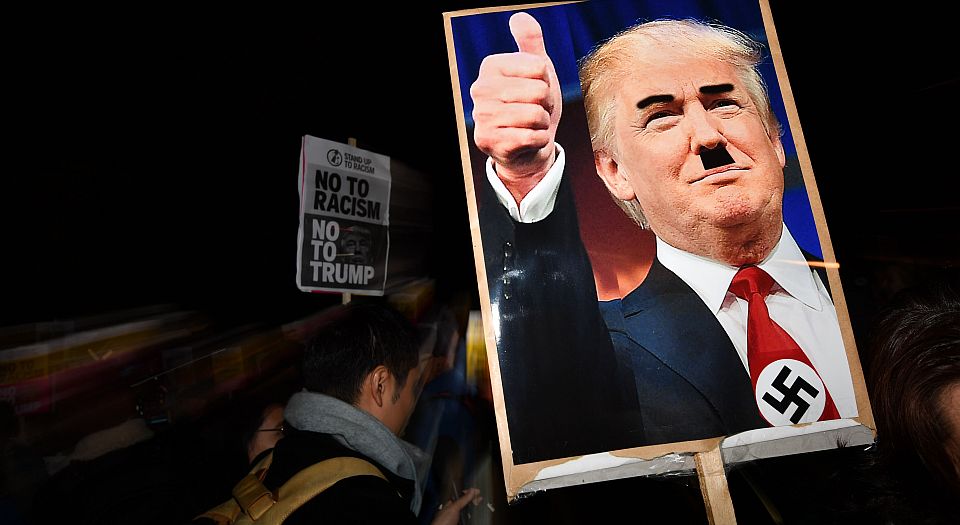 President Trump has done some rash, bad things since he took power three weeks ago. But his critics have done something rasher. Something even more bereft of reason than Trump’s orders and tweets. Something more likely to stoke prejudice.

They’ve reduced the Holocaust to a meme.

They have used and abused the greatest crime in history to underscore their contempt for Trump, comparing him to Hitler, talking of his travel ban in the same breath as the Nazis’ persecution of Jews, warning darkly that ‘we know how this ends’. And in the process they’ve relativised the Holocaust. They’ve normalised it. They have dented its gravity and uniqueness by presenting it as a routine, recurring feeling in history that currently finds expression in ‘Trumpism’. They have turned the extermination of Europe’s Jews into an exclamation mark to their angst over Trump, and that is unforgivable. Morally, politically and historically, it is worse than anything Trump has done so far.

There is more than one way to deny the Holocaust. Some do it maliciously, with racist intent, arguing that the Holocaust is a hoax, an invention of Jews who wanted to secure their moral and political power in the postwar era. Others do it more thoughtlessly, with what they consider to be good intentions: they treat the Holocaust as a motif, to be wielded against any contemporary political idea or movement they find terrifying or simply don’t like. Bad people become ‘New Hitlers’, awful conflicts are said to echo the Holocaust. Holocaust dilution, we might call it. And it is a close, if sometimes unwitting, cousin of Holocaust denial.

Holocaust dilution has been rampant in media and radical circles over the past three weeks. In the overblown, sometimes even unhinged response to Trump, all sense of moral and political decorum, or basic reason, seems to have been abandoned. Journalists speak openly of ignoring Godwin’s Law in the Trump era — Godwin’s Law being the internet adage that if a web-based discussion about politics goes on long enough, someone will make a potty Hitler analogy. This grating BTL (‘below the line’) habit has now burst upwards, into actual commentary, and is embraced by the very hacks who for years sneered at the sad web-surfers who couldn’t go five minutes without typing ‘HITLER’.

The dredging up of the 1930s is everywhere now. ‘Donald Trump is a fascist’, says the Washington Post. Nobel Prize winners say his corporatist policies haven’t been seen ‘since the German and Italian economies of the 1930s’. British Labour MP Dennis Skinner speaks of Trump in the same breath as ‘fascist dictators Mussolini and Hitler’. The Guardian cynically used Holocaust Memorial Day, on 27 January, to attack Trump’s travel ban on seven Muslim-majority countries. So did Yvette Cooper, drawing a link between Trump’s bar on migration from those countries with the events of the Holocaust. This is a woman who was a key figure in New Labour, which in 2006 ‘debarred virtually all Bulgarians and Romanians from working in Britain’. If Trump is Hitler, who’s she: Magda Goebbels?

Even commentators who previously resisted the Trump-as-Hitler talk are now embracing it. Ron Rosenbaum, author of Explaining Hitler, says he was approached by numerous editors to offer his thoughts on Trump’s ‘fascistic tendencies’, but he resisted on the basis that ‘while Trump’s crusade had at times been malign… he did not seem bent on genocide’. But Rosenbaum has changed his mind. Now he says Trump seems to be working from ‘the playbook [of] Mein Kampf’. Even historians of Hitler have become practitioners of the trolling tendency of Godwin’s Law. It’s there on anti-Trump demos, too. There are placards with Trump done up as Hitler, even with images from the Holocaust: emaciated Jews, marshalled as a meme army to the cause of expressing fury with Trump. It is repulsive. ‘We are history teachers and we know how this ends’, said a banner with Trump doing a Nazi salute.

Such Holocaust dilution has been gaining in influence for years. We see it in the casual depiction of foreign tyrants — Saddam, Mugabe, Bosnian Serbs — as the New Hitlers, and their actions as New Holocausts. We see it in the way community groups, especially Muslim ones, insist Holocaust Memorial Day should mark other genocides too, because… well, because the Holocaust wasn’t special. We see it in the fashion for arguing that the Holocaust was an act of barbarism not only against Jews but also against gays, trans people, Roma people. This is one of the ugliest aspects of identity politics: a kind of Holocaust envy, an attempt by identity groups to boost their claims to victimhood by insisting they were akin to the Jews during the Holocaust years. Yet as argued by that great warrior against Holocaust denial, Deborah Lipstadt, while it is unquestionable that gays and Roma people suffered terribly under the Nazis, they were not subject to a policy of systematic extermination: ‘It was only the Jews whose extermination could not wait until after the war.’ Trump himself engaged in this kind of phoney universalism when he issued a statement on Holocaust Memorial Day that made no mention of the Jews, instead talking about the ‘innocent people’ targeted by Nazi terror.

The Holocaust abusers don’t seem to realise what a dangerous game they’re playing. Holocaust relativism has long been a key ingredient of Holocaust denial. As argued in The Holocaust, the Open University’s guide to the debates around this calamity, ‘Relativising the Holocaust has been one of the classic techniques of some of those engaged in Holocaust denial’. They ‘minimise Nazi atrocities’ by ‘listing them alongside [others]’ (1). Not all hard-right anti-Semites completely deny the Holocaust happened. Some say it happened, and was bad, but only as bad as other horrific things. In the process they water it down; they weaken its weight. The left once stood up to Holocaust relativism. In Germany in the 1970s and 80s, when some right-wing historians started to locate the Holocaust within run-of-the-mill war and terror, left-wing historians accused them of ‘trying to relativise the Holocaust’ (2). Now, tragically, the left is often at the forefront of relativising the Holocaust.

The end result? They inflame the prejudices of some of the nastiest people in society: those who’ve always argued that the Holocaust wasn’t such a big deal. The irony is terrible: in the name of standing up to the ‘fascist’ Trump, many on the left fuel the ugly and cynical relativism of those who genuinely have fascistic leanings and who think it’s high time we all accepted that the Holocaust was pretty ordinary.