The Free Speech Movement in flames

The mob censorship of Milo is a betrayal of Berkeley’s radical history. 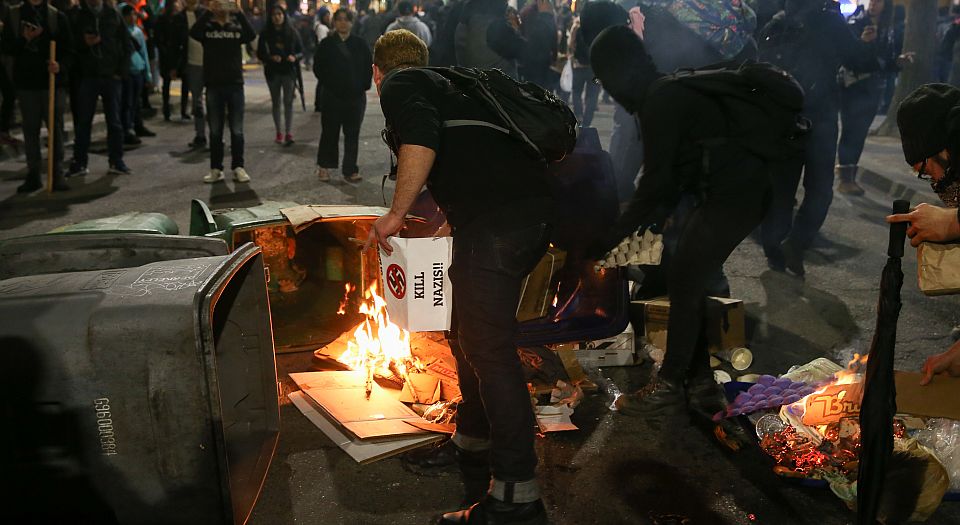 On 1 October 1964, Sproul Plaza at the University of California, Berkeley was the setting for one of the most historic moments in the fight for free speech on campus. Jack Weinberg, chairman of Campus CORE, a student civil-rights group, was arrested and put in the back of a police car for setting up a campaigning table, breaking the rules on political activity on campus. Seven thousand students surrounded the police car, giving speeches and performing songs on top of it, and refused to move until Weinberg had been released. It was the spark that lit the Free Speech Movement, a student and faculty campaign of sit-ins and civil disobedience that overthrew Berkeley’s censorious in loco parentis rules and inspired freedom-fighting students across America to do the same.

Last night, Sproul Plaza was in flames. Students amassed outside the Martin Luther King Jr Student Union to protest the appearance of Trump cheerleader and right-wing provocateur Milo Yiannopoulos. Protesters held up placards saying ‘We REFUSE to accept fascist America’ and ‘BASH THE FASH’. Then a mob of black-clad ‘anti-fascists’ broke through police barricades, smashed windows, threw fireworks and set a light pole on fire. The event was cancelled and the birthplace of the Free Speech Movement became the site of its spiritual death. Where Berkeley radicals 50 years ago put themselves on the line for unfettered free speech, for the right of students to listen and speak and reason, their pimpled heirs are practising the must ugly, irrational form of censorship: censorship of the mob.

Just think about what has taken place. These protesters used violence to try to silence a view they simply dislike, which they disagree with. It speaks not only to the deep intolerance of campus radicals and left-wing groups today, but also to their fundamental unreason, their brutish belligerence. Their hysterical fear of unfashionable opinion, their refusal to engage with out-there ideas, has reached its ugly conclusion. Though the antifa crew may not have been representative of the nearly 2,000 students who turned out peacefully to protest against Milo, they are the sharpest expression of a Safe Space movement built on the assumption that mere ideas are unsafe, akin to a threat. And they’ve responded in kind: challenging Milo’s ‘fascism’ by means of force and fury and flame. A grim irony indeed.

This is a symbolic moment. The sight of students and radicals rioting out of fear of letting people listen and decide for themselves represents the unravelling of Enlightenment values in the academy. While Trump voters are often smeared as a prejudiced blob, this is what real, unthinking intolerance looks like. And it’s a betrayal not only of the high-minded, liberal ideals on which the academy is founded, but also of the once radical left. The students of ’64 knew that freedom was paramount. That’s why, as FSMer Bettina Aptheker told me in 2014, they fought for free speech alongside right-wing students, some of them supporters of Barry Goldwater, the Trump of his day: ‘The only requirement was that they believed in freedom of speech.’

That when faced with a president so authoritarian young radicals can only respond in kind is a grim reminder of where self-willed censorship leads: to stupidity and blind rage. The casual presentation of right-wing wind-up merchants like Milo as the first act of a new fascism, and these students’ inability to do anything other than wail when confronted with ideas they dislike, speaks to a new endarkenment. To paraphrase John Stuart Mill, if you refuse to let your views be challenged they become like prejudices that you are incapable of defending or articulating. When you reject free speech you lose the opportunity to defeat ideas you dislike and propound your own. You trade changing the world for throwing things at it. That’s what we saw playing out at Berkeley last night.

Tom Slater is deputy editor at spiked. Unsafe Space: The Crisis of Free Speech on Campus, edited by Tom, is published by Palgrave Macmillan.