Standing up to Trump

spiked’s ideas for taking on The Donald. 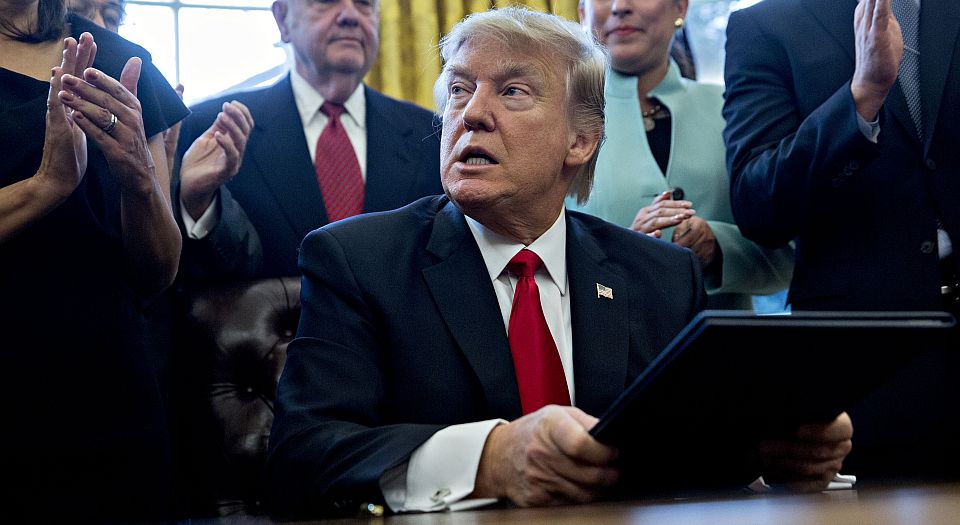 In many ways, the unclear nature of the protests isn’t necessarily a bad thing, for now anyway. This is people finding their voice, in public, together. But in the interests of kicking off more discussion, here are spiked’s thoughts on some initial demands we might make of Trump.

Your reimposition of the Reagan-era ban on abortion talk by NGOs that receive US government funding is cruel. Preventing NGOs from offering counselling or referrals for abortion to women in the South is both an attack on NGO workers’ freedom of speech, their right to propagate ideas and practices they consider good, and a restriction on the ability of poor women to access knowledge and services related to abortion. It will cause hardship.

And if, as some observers believe, this reflects your antagonism to abortion rights at home too, then you have a serious fight on your hands. The right to choose is central to women’s autonomy. It is the right that allows them to have dominion over their bodies, and over their destinies. It underpins their equal footing to men in public life. To paraphrase John Stuart Mill, ‘Over herself and her own body, the individual is sovereign’. Keep your hands off abortion services.

The first military raid you approved, in Yemen on Saturday, claimed the lives of 15 women and children. This barbarism must stop. Yes, you inherited it from Obama, who expanded America’s ‘war on terror’ from Iraq and Afghanistan to Syria, Yemen and Somalia. But you’re in charge now and have the power to say No, to refuse to approve raids and strikes that ostensibly target terrorist leaders and yet which continually kill civilians while doing little to weaken terrorism. In fact the problem of Islamist violence has grown.

The ‘war on terror’ has wrought authoritarianism at home too, with increased spying on citizens. You should wind this war down. Don’t back the Saudis in Yemen, withdraw from Iraq, and stop the funding and promotion of militant groups in Syria. If you’re serious about defeating Islamist terrorism, as you said in your inauguration address, then consider working with local forces like the Kurds, who have the know-how and commitment to take on ISIS.

Your temporary halt on taking refugees from Syria and your ban on travel to the US by the citizens of seven Muslim-majority countries is unreasonable, and a prime example of the politics of fear.

No person inside the US has ever been killed in a terror attack by a citizen of any of those seven countries. And not one American — not one — has ever been killed by a terrorist who entered the US as a refugee. Yes, vetting new arrivals is important, and you might want to vet more thoroughly those arriving from warzones. But do not close your borders to certain nationalities. Be more open, more generous. Have enough confidence in American values to trust that newcomers will want to absorb them, if encouraged to.

You do not understand the importance of free speech. ‘No one should be burning the American flag’, you have said. You admire England’s archaic libel laws. You have said that ‘it is not “freedom of the press” when newspapers and others are allowed to say and write whatever they want’. But it is. That you don’t know that is worrying, given you run a country whose First Amendment guarantees free speech.

Your desire to muzzle leakers, to prevent government employees from sharing information, speaks to your instinct to use authoritarianism to address political problems, or simply to stop them from being aired. For all your claims to be anti-PC, you have a PC-style touchiness towards criticism and you fear ideas you don’t like — like when you suggested shutting down the internet so you could get all the Islamists off it. Mr President, do not even think of touching free speech. The web, and the world, cannot be a ‘safe space’. Let everyone think what he wants and say what he thinks.

Get serious about trade and industry

Your protectionism, your talk of tough tariffs on imports from Mexico and rethinking deals with Europe, suggests you don’t value free trade. But free trade allows nations and their peoples and products to interact, breaking down barriers. Celebrate it, don’t fear it.

And do not renege on your talk of jobs. It’s good that you’re pushing ahead with construction of the Keystone XL and Dakota Access pipelines: this rightly elevates the need to create jobs and new methods of transporting oil over the environmental concerns that activists exploit to block progress. But you must do more. Build more, frack more, industrialise more, and show working-class Americans you’re serious about them working.

The press is full of concern about your attitude to the death penalty. You seem to love it. In 1989 you infamously took out an ad in the New York Times saying ‘Bring Back the Death Penalty!’ after five black and Hispanic men were charged with raping a woman in Central Park. You’ve called for the death penalty for child molesters and even for those who leak state secrets.

The death penalty is wrong. It grants the state too much power, the ultimate power, and it’s shot through with a misanthropic fatalism, with a belief that some people will never change and so we might as well kill them. It is authoritarian and anti-human. A civilised, democratic president would argue against it and encourage the states, through debate, to stop using it. Do that.

Give us politics, not anti-politics

Your pose as the anti-politician, the man who hates the political class, is getting wearisome. It has crossed the line from criticism of the establishment, which is good, into a trashing of politics itself, of the very business of people getting together and talking and voting in order to make things happen. When will your anti-politics shift into a conviction that you alone should decide how things should be run? That’s the logical conclusion to anti-politics, whether it takes the form of demagoguery (you) or technocracy (Hillary).

As spiked argued in May last year, everyone who believes in the potential of politics to change society for the better should be worried about you being president. What we need now is not cynicism or a ‘saviour’: we need a real, democratic political culture that engages as many people as possible in a debate about the future. Stop sneering at politics; be a proper politician.

In short, Trump, do not interfere with individual autonomy, freedom of speech or reproductive choice; do not promote the politics of fear; do not keep fighting the disastrous ‘war on terror’; and do not expand the power of the state over people’s lives. Respect freedom and choice and trade and growth: true, good liberal ideals.