Trump’s cruel order and the crisis of reason

Both Trump and his critics have taken leave of rationalism. 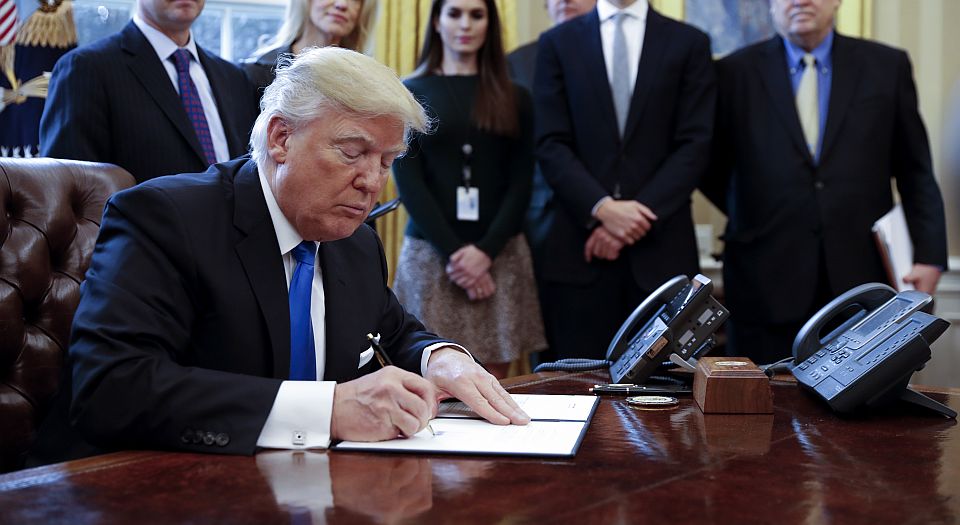 All of us who believe in freedom and reason should oppose President Trump’s executive order on Muslim migration. This cruel and sudden stop to all refugee applications and to travel to America by the citizens of seven Muslim-majority countries is profoundly illiberal. It is the lowest form of gesture politics: the swipe of a pen intended to demonstrate all-American strength, yet really signalling a stunning disregard for the American spirit of liberty and tradition of providing a home for the repressed of the globe. In the time it took to write 12 poxy letters — Donald J Trump — it threw people’s lives into disarray.

The order will impact pretty devastatingly not only on those fleeing warzones that are partly of America’s making, but also on travellers, businessmen, students and anyone else whose only crime is to have been born in Iraq, Syria, Yemen, Libya, Iran, Somalia and Sudan. We’ve already heard terrible stories of the order’s unforgiving impact: Iraqi interpreters who helped American forces stranded at US airports; an Iranian student at an American college discovering mid-flight, on her way back to the US, that she’s no longer welcome. In a painful Facebook post she asked what will become of her pet dog, her parked car — testament to the crisis into which real people’s real lives have been plunged by Trump’s tragic need to appear strong.

That people have been detained or threatened with deportation or told America is off limits to them speaks to the order’s cavalier overriding of liberty. That its targets are the citizens of Iraq, Syria, Yemen, Libya, Iran, Somalia and Sudan speaks to its rejection of reason. Between 1975 and 2015, no Americans were killed in terror attacks by citizens from those nations. However, many Americans were killed by terrorists hailing from Saudi Arabia, UAE, Egypt and Lebanon, and yet those nations aren’t in the order. Even on its own craven terms — protecting Americans from Others, from those unknowables — it is irrational. This is what happens when the politics of fear utterly ousts government by consideration and conscience: entire nations can be criminalised on the basis of nothing, whole lives turned upside down to the end of political posturing, liberties left for dead at the altar of presidential expediency.

This is the worst thing about the order: its lack of thought, its elevation of theatre over the reasoned political business of talking and thinking. The order does not suggest, as some of its critics claim, that the Trump administration is hatching a 1930s-style plan to impose a fascistic new world order. On the contrary, it is the chaos of the order, its immaturity, that is most striking. People at the Department of Justice didn’t know the details of it until the last minute. Immigration officials weren’t told in advance what to expect. It isn’t a big sinister plot; it’s an act, a pose, a tweet with menaces. It’s government by trolling. That should concern us greatly: government shouldn’t be conducted like this.

The order reveals something incredibly important about Trump and the alt-right that cheers him: they’re as given to wimpishness and censoriousness as any of the so-called ‘SJWs’ they love to rail against. This is basically an effort to Safe Space the whole of the US. It’s motivated by a variant form of the sense of siege and fear of ideas (in this case Islam) that are the hallmarks of the PC set. Trump seems to think his order shows how devoted he is to protecting American values; it shows the opposite — that he has so little faith in those values that he thinks the arrival of people with a different moral take would threaten them to the point of extinction. Where the earlier, positive approach to immigration — ‘give me your huddled masses’ — spoke to a conviction that America’s values were so good and strong it was worth investing a great deal of energy into the project of integrating utter strangers into them, the Trumpite discomfort with migration reveals a deep uncertainty about those values. It is Trump’s depressing, declinist view of America as a victim of swirling existential forces — his own politics of victimhood, his own PC — that makes him dread the Yemeni looking for a job or the Syrian looking for safety.

So yes, let us oppose this miserable order. But we also need to talk about the protesting against it. It is close to unhinged, and that is a big problem. So far, sadly, the opposition to the order has been a kind of unreason, too. It has substituted the cool, tough, political critique of the order that we need with its own brand of fearmongering and the deployment of an ahistorical dread about the return of Nazism. Witness the febrile whispers about a new fascism, the transformation of Trump into a little Hitler no respectable Western leader, including British PM Theresa May, should meet with. If the order exposes a lack of moral conviction in the Trump camp, the opposition reveals the absence of a moral anchor, of reasoned politics, in the modern left.

There are three problems with the promiscuous marshalling of Holocaust imagery to demonise Trump. The first is that this plundering of historical terms does damage to history itself. It waters down the unique barbarism of what was done to the Jews, making it appear routine. There is nothing — nothing — to compare Trump’s opportunistic, temporary ban on travel from a minority of Muslim-majority countries with the Nazi plan to vaporise every Jew on Earth. The second problem is that the overblown response implies that Trump’s actions are utterly out of the ordinary in the 21st-century West, that we haven’t seen the like of this since Germany went mad 80 years ago. This lets Western governments, including the Obama administration, off the hook. The fact is, Trump’s order falls well within the parameters of 21st-century fear and authoritarianism, whether it’s Obama’s temporary ban on Iraqi migration to America in 2011 or the EU paying African dictators to keep their pesky peoples out of Europe or Theresa May’s wrongful deportation of 48,000 migrant students from Britain. Imagine asking May to condemn Trump: it flatters her with a capacity for moral principle she simply doesn’t possess. Tomorrow’s demonstration at Downing Street calling on May to distance herself from Trump is likely to benefit her more than embarrass her, since it implicitly whitewashes her own maltreatment of migrants through demanding she be the reasoned voice on Trump’s order.

And the third problem with the response is that it is driven by its own politics of fear. The exploitation of past horrors to try to paint Trump as a 21st-century aberration is meant to make the protesters sound passionate and determined, but really it suggests a sense of political impotence on their part, a lacking in any serious language with which to confront Trump and convince ordinary people there is a different, better way to do politics. The use of historical dread becomes a stand-in for reasoned discussion, a way of saying ‘Trump is evil’ in lieu of being able to say ‘Let’s do liberty and politics like this instead’. This is the awfulness of what has happened this weekend: Trump has exposed his authoritarian streak, and the left has exposed its inability to oppose such authoritarianism in a real, connecting, positive way. We have the theatre of Trump’s strongman act, and the hysteria of a radical take on the politics of fear. Between theatre and hysteria, there has got to be something else: reason, perhaps, and principle, and a true, fear-free moral case for liberty.