The real problem with the US economy

Job losses in manufacturing can’t simply be blamed on China or IT. 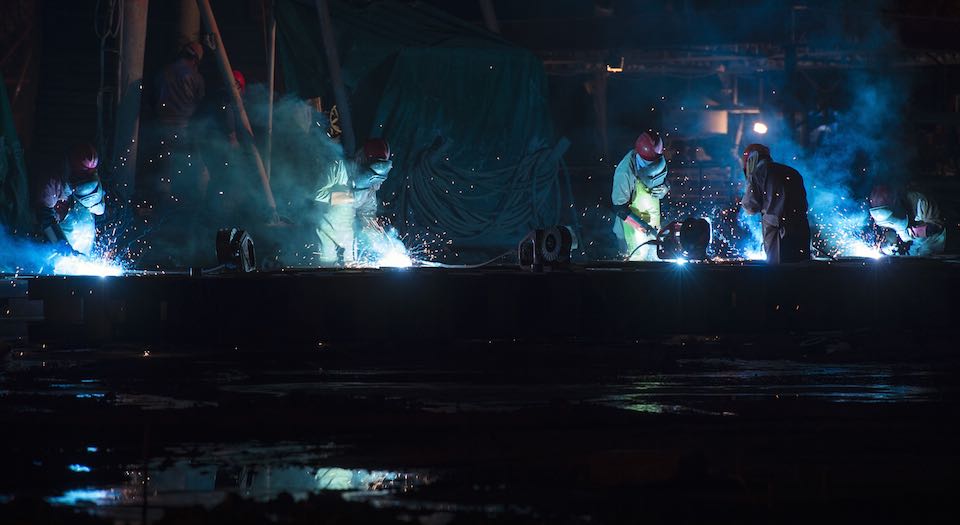 In trying to explain the loss of jobs in manufacturing, the US president-elect, Donald Trump, has foolishly fingered China as the main cause. On the other hand, Trump’s critics, both conservative and liberal, have highlighted automation as the main cause.

Neither side has it right. The ‘China vs IT’ debate neglects how, in manufacturing, as elsewhere, US economic decline means a reliance on new forms of labour utilisation, and is strongly rooted in weak research and development (R&D).

US economic decline isn’t just a tale of job losses. Even in manufacturing, it’s more and more the case that robots work next to workers, not instead of them. And according to the US Bureau of Labor Statistics, general US employers have been falling back on new sources of labour.

Overall, US employment is buoyant. And in 2015, the hours worked in aggregate by the whole of US society surpassed those worked before the recession of 2008-09.

Compared with the expanded scale of labour exploitation, however, US R&D is weak. Measured against GDP, US business enterprise R&D hardly ever exceeded 1.94 per cent from 2000 to 2013. Yet China is catching up with the US fast: it moved the needle from 0.54 per cent in 2000 to 1.58 in 2014. By the end of that period, too, corporate R&D in the Republic of Korea – home to companies like Samsung – reached a whopping 3.36 per cent of GDP.

These dynamics of labour and R&D are certainly beyond The Donald. For, in his framework, Beijing has simply depressed the value of the Renminbi so as to cheapen China’s manufacturing exports. At the same time, US manufacturers should stop outsourcing production to China just as much as they should no longer outsource to Mexico. Simplistic? Sure. But Trump’s critics are no better.

Factories: IT hasn’t helped much

During the election campaign, fans of free trade at the Wall Street Journal proclaimed: ‘Wharton Grad Trump Fails Economics.’ For the Journal, the ‘globally connected, tech-driven US economy’ would always beat Trump’s vulgar protectionism. Technology, not trade, explained most of the loss of 5.6million manufacturing jobs between 2000 and 2010.

Since the election, commentators on the Democrat end of the political spectrum have also weighed in against Trump. The New York Times, and now the Harvard Business Review, stated that while automation was not much mentioned before the election, it has been, in the long term, a much greater cause of US manufacturing job losses than trade or outsourcing.

That may well be true. But as Keynes famously remarked, in the long run, we are all dead. Look at the short term: since the recession in 2008-09, real US productivity in manufacturing has been a disaster zone. Measured as output per hour, annual increases in US factory productivity fell dramatically between 2008 and 2015 – from nearly five to less than two per cent.

Whatever IT has contributed to US factory automation, the evidence implies that its effect is weakening. Perhaps that’s because IT in the US plays a part in the crisis of capital investment. As a percentage of US GDP, private-sector fixed investment on information-processing hardware and software plummeted by a quarter between the winter of 2000 and the first half of 2009. Since then, it has stagnated, and, last autumn, was back at levels not seen since 1995.

Of course, you might argue that some of this decline is because corporate IT has become cheaper. Yet the much-hyped ‘Internet of Things’, for instance, is set to be a lot more expensive to apply in industry, and its tricky supply chains, than people.

IT and factory automation won’t rescue the US. That view just flatters IT corporations – the new, Democrat-leaning masters of the universe based in Silicon Valley and California. It’s time that, in their assessment of IT, Americans waved goodbye to a century of technological determinism and snake-oil salesmanship.

A bigger problem than IT

The growing but halting sophistication of IT in US factories has happened alongside rising, if widely degraded, employment in the US economy. David Autor, who has chronicled the ‘China shock’, and knows a little about IT, puts it quite well: ‘The challenge is not that we’re running out of work. The US has added 14million jobs since the depths of the Great Recession. The challenge is that many of those jobs are not good jobs.’

So long as US capitalists prefer labour utilisation to creating great, new R&D-based industries, the US economy will be in trouble. No amount of China-bashing or IT euphoria can change this. In the wake of all the fuss about hacking, both Trump and his critics need to know that it will take more than a burgeoning cybersecurity sector to put the US economy back on its feet.