Perhaps the Irish might now be allowed to move beyond the past. 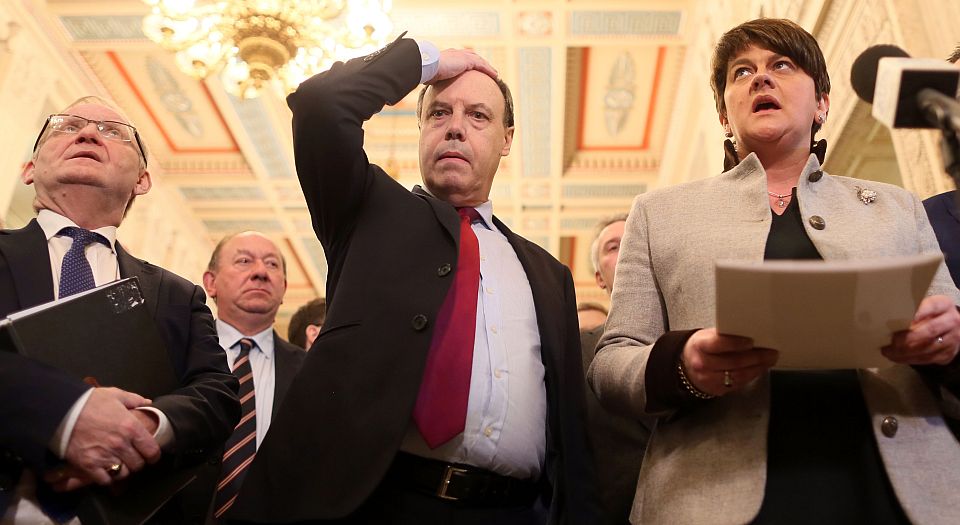 The crisis that led to Monday’s collapse of power sharing in Northern Ireland has been a long time in the making.

Less than a month before Christmas 2015, following a lengthy ‘talks process’ brokered by the Northern Ireland Office (NIO) and Ireland’s Department of Foreign Affairs, Sinn Féin and the Democratic Unionist Party (DUP) struck a deal to resolve a political crisis that had ‘pushed the coalition executive towards the verge of collapse’. While two IRA-linked killings had provoked a succession of unionist walkouts and resignations, the 2015 crisis was largely fuelled by the fallout from two earlier ‘crisis summit’ agreements, both of which had come unstuck in a stand-off between unionists and nationalists over the issue of welfare cuts.

A Fresh Start committed unionist and nationalist partners to work together in government to agree and implement the cuts and jointly pursue ‘the goal of a Northern Ireland where politics works’. In return for a commitment to govern, the UK Treasury awarded the power-sharing government of Northern Ireland an additional £500million towards ‘tackling issues unique to Northern Ireland’. This Fresh Start funding package included £60million to support ‘confidence- and relationship-building measures within and between communities’ and the establishment of a Commission on Flags, Identity and Culture to ‘pave the way for greater awareness and understanding of differing cultural traditions.’ As the two party leaders signed the Agreement and Implementation Plan, they resolved to ‘move forward with a real sense of hope and purpose’.

Six months later, a new crisis erupted, when news of a botched ‘green energy’ initiative hit the headlines. The Renewable Heating Initiative had been launched by former DUP enterprise minister, now first minister, Arlene Foster, as an incentive for businesses to switch from fossil fuels to more ‘sustainable’ biomass heating systems. In the absence of adequate cost controls, what had begun as an attempt to reduce carbon emissions ended up as a ‘cash for ash’ fuel-burning bonanza. Sensational media reports told of unscrupulous profiteers burning fuel around the clock to claim subsidies. A ‘government insider’ warned of a multimillion-pound overspend. The apprehension that Stormont – and not the UK Treasury – might be expected to pick up the bill provoked outrage among Northern Ireland’s political class.

Always ready to lend a helping hand, deputy first minister Martin McGuiness invited his beleaguered first minister to stand aside, pending an independent inquiry. Foster responded in her famously brusque manner: ‘The first minister does not take her instructions from Sinn Fein but from the electorate.’ McGuiness tendered his resignation, an action which automatically ejected his power-sharing partner from office. He cited her ‘failure to exhibit any humility’ as indicative of her party’s ‘deep-seated arrogance’, which was ‘inflicting enormous damage on the executive, the assembly and the entire body politic’. The mother of all crises ensued, ultimately leading to the collapse of the government and an end to a decade of joint-rule between unionist and nationalist politicians.

Although infused with peace-process pieties, McGuiness’s letter of resignation clearly indicates that the rift between Sinn Féin and its partner in government runs much deeper than the debacle over ‘cash for ash’. While reaffirming his personal commitment to ‘serve all the people of the north and the island of Ireland’, McGuiness points the finger at those unionists who may harbour a ‘negative attitude to nationalism and to the Irish identity and culture’. Far from being an appeal for greater dialogue or a softer, more inclusive style of politics, the letter calls on the ‘Irish and British governments’ to fulfil their ‘internationally binding obligations’ to ‘uphold equality, mutual respect and the all-Ireland approaches enshrined in the Good Friday Agreement’. This was not so much a letter of resignation as it was a petition to the powerful to discipline and exclude those who disrespect ‘nationalism, Irish identity and culture’.

The determination that Northern Ireland should be governed through power-sharing between unionists and nationalists, and that each ‘tradition’ must be accorded ‘parity of esteem’, is enshrined in the 1998 agreement, which maintained the old Partition settlement by replacing majority voting with power sharing and protections for minority rights. In order to defuse the national question, the agreement substituted cultural recognition and group rights for the exercise of political power by a self-determining, unified demos. Perhaps the permanent state of crisis that has dogged Northern Ireland’s experiment in power sharing attests to the impossibility of reconciling the politics of identity and recognition with conceptions of serving the public good over communal interest.

New elections have been called for March, with some predicting a brutal sectarian stand-off, further crisis and even a return to Direct Rule. Meanwhile, new commissions of inquiry for ‘dealing with’ the legacy of the past and a new independent Historical Investigations Unit wait in the wings, holding out the prospect of decades of investigations, judicial and public inquiries into Troubles-related cases. Since the Partition of Ireland in 1920, it’s often been said that whatever the choice on the ballot paper, northern elections are inevitably fought around the existential question of Northern Ireland’s constitutional status. Yet while it seems probable that many voters will stay loyal to existing nationalist and unionist communal allegiances, politics is changing and there is sure to be a greater appetite among voters for change. Politicians will have to start talking about housing, social care, pensions, public services, economic growth and jobs.

In Northern Ireland, where a majority voted to remain in the EU, Brexit is already forcing people to think and perhaps vote outside traditional sectarian blocs. I would predict that the (anti-EU) People Before Profit will continue to challenge Sinn Féin in its West Belfast and Derry heartlands, while its support for Brexit means the DUP will have to work hard to maintain its position as largest unionist party. Ironically, Sinn Féin, the party that triggered the end of power sharing, is also the party most committed to ‘securing designated special status for the north within the EU architecture; an Irish solution to a British problem’. The collapse of the power-sharing government will not be helpful to Northern Irish Remainers wishing to make their own case from inside the UK.

But coming at the question from a different angle, Brexit raises the possibility of a changed future for Britain and Ireland. It would be wrong to underestimate the degree of concern for the future felt by many Irish Irish people, north and south, but going beyond the mindset of peacebuilding, with its fixation on security, conflict and ‘dealing with the past’, may make it possible to imagine new ways of building the future in an all-Ireland context. Whatever that future may hold, it should now be clear that a return to the past offers nothing but continuing political impasse and deepening communal polarisation. So, as Martin McGuiness quits the stage, might Northern Ireland seize its chance to fly the nets of tradition and history?