The return of the people

2016 proved that the fight for democracy is only just beginning. 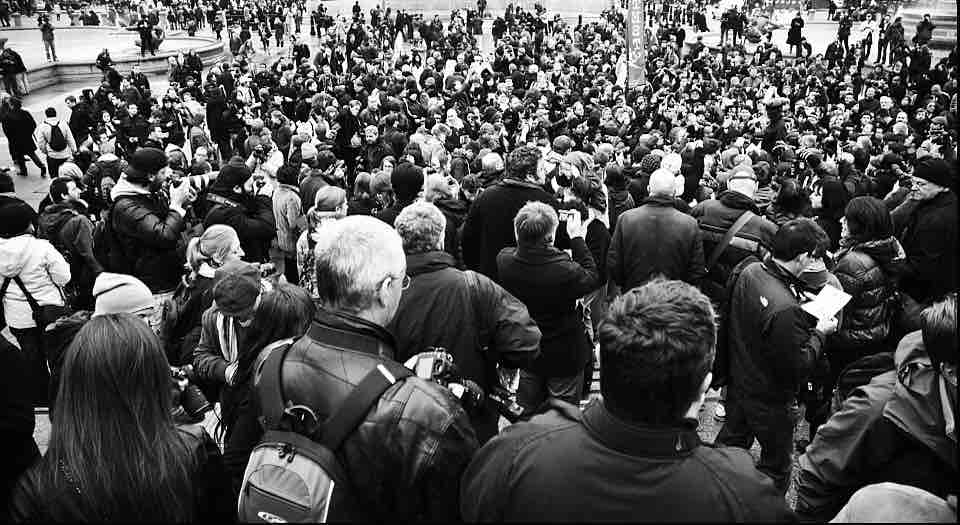 The people. Have you noticed how often that phrase comes up these days? In the wake of the democratic revolts of 2016, this phrase, which echoes down the centuries, which is more at home in a past revolutionary tract than on the lips of contemporary politicos, is being uttered on TV, radio, at public meetings, on a daily basis. Squirming anti-Brexit politicians, cooking up schemes to overturn the Glorious Referendum, are asked by trenchant interviewers if they intend to ‘thwart the will of the people’. It’s used cynically, too. When our unelected PM Theresa May pledges her commitment to ‘the will of the people’, as expressed on 23 June, it rings hollow. But the return of that potent, historic phrase tells us something.

It tells us how incredible, how Earth-moving, 2016 was. It tells us that this year, at a time when the gears of technocracy seemed likely to grind on for decades to come, the public intruded on history. From the Brexit vote to the election of Trump to the Italian referendum, the people made their presence felt this year. After decades of having a walk-on role in political life, of being nudged, hectored and, above all, ignored from a distance, of being asked to do little more than shuffle the deck every four or five years, we have potentially changed the course of politics. We stood up to the political, media and capitalist class and struck a blow to the status quo. We did that.

The revolts of 2016 differ. Lumping every anti-elite uprising in the world under the dreadword of populism is just the means through which anti-democrats try to delegitimise the threat that confronts them, to paint the intrusion of the people as a global Endarkenment. Brexit was an unmistakable demand for more control, for self-determination, for a way of doing politics differently. The Trump vote, sadly, has outsourced the same democratic fervour from which Brexit sprang to one perma-tanned charlatan. And the elections in France and Germany next year could well bring genuinely dark forces closer to power. But it is the public desire for democracy, not the bluster of ‘populists’, which so scares the elites – and it’s also where the biggest opportunity lies.

In a recent essay for the Observer, Nick Cohen, lamenting our post-Brexit ‘populist’ age, said politics is now hostage to ‘“the will of the people” in its unmediated rawness’. Unmediated rawness. That’s what these people really think: that democracy is a surrender to the baser instincts of the electorate; that we are raw, primitive, chaotic and that our desires should be mediated rather than respected. This is the unspoken prejudice that 2016 has made brutally clear. The calls for parliament to overturn, or at least dilute, Brexit, or for the Electoral College to ‘do the right thing’ and dump Trump, have revealed an elite desperately trying to mediate our unleashed passions. And all this begs the question: who does the mediating? If not Mr Cohen himself.

In steps representative democracy. In a shameless, Orwellian turn, elite Remainers and Trumpophobes have begun arguing for overturning democracy in the name of democratic process. Witness the sudden passion among Remainers for parliamentary sovereignty, which they didn’t give a damn about when Brussels undermined it. The ongoing Brexit legal challenge was clearly brought in the hope that a vote in parliament would be a chance to vote Brexit down. In the US, the conservative writer Andrew Sullivan lamented what he sees as an unwillingness to exploit the checks and balances built into the US system to halt ‘democratic wildfires’, in particular, the delegates of the Electoral College’s slavish tendency to follow the state-by-state vote rather than cast their votes in accordance with their conscience.

This uptick of interest in democratic process is deeply cynical. Remainers’ interest in parliamentary sovereignty has only emerged because they think they can use it as a weapon against popular sovereignty. The same is true of the US. Even the Hillaryite crowing about the popular vote – Hillary won by 2.8million – isn’t about a real desire among Democrats for a more direct form of democracy; rather they want a system that would have delivered their desired outcome. (And, as many have pointed out, it’s far from certain that – under a popular vote – Trump would have lost, given more Trump supporters in deep-blue states would have turned out.) What this illuminates is that the battle for democracy, and for institutions that truly realise it, is far from over.

Representative democracy was not handed down from heaven. Direct democracy ruled in Ancient Athens, after which the entire idea of self-rule lay dormant for 2,000 years. Representative democracy, and eventually universal suffrage, was forged in Britain over centuries, through radical agitation from below – from the Levellers through to the Chartists and the Suffragettes – and through nose-holding concessions from the elite. As such, representative democracy has always been imperfect, a fudge, a means through which the democratic will – such as it existed – could be mediated and dampened. As Edmund Burke put it in 1774, representatives exist to temper the will of the people: ‘[M]andates issued, which the member is bound blindly and implicitly to obey… these are things utterly unknown to the laws of this land.’

2016 has thrown everything that was taken for granted in politics into question. The legitimacy of the elites and the trajectory of politics have been derailed by the people’s intrusion into history. But the democratic revolts of this year have also raised something more profound – that is, the question of the people themselves, of how our will can be embodied and pushed forward, how we can reign unmediated. Going into 2017, spiked wants to be at the forefront of that discussion, arguing for a more direct democracy that truly gives voice to the people, now that representative democracy has been revealed as anything but.

Picture by: Andy Matthews, published under a creative commons license.