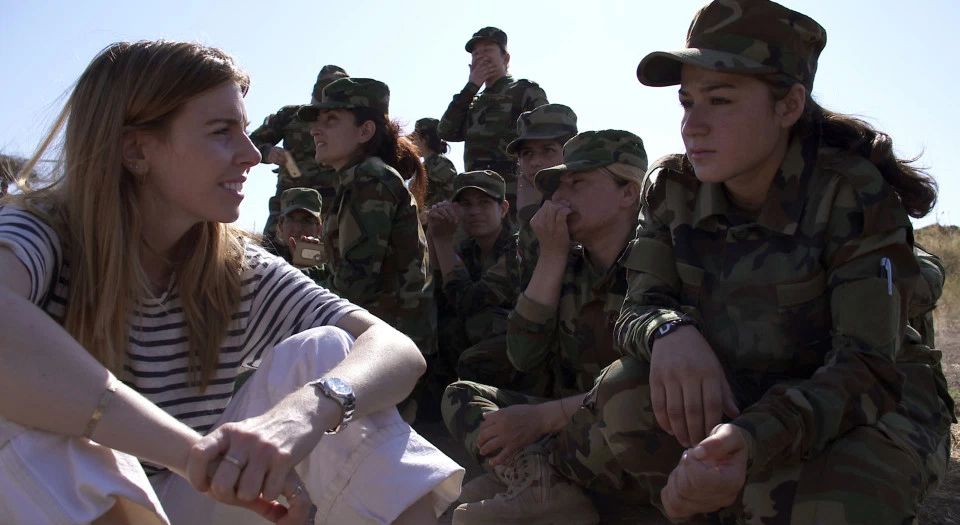 In her 1999 book Compassion Fatigue: How the Media Sell Disease, Famine, War and Death, US journalist Susan D Moeller makes the point that there is only so much horror people can take in before they start to become inured to it.

It’s why bombings of civilians in Yemen generate such little media coverage or sympathy. (After six years of watching the daily atrocities in Syria, audiences need a new high.) And it’s why ISIS cornered the market in media coverage with its creative attitude to violence. Why watch beheadings and crucifixions on Game of Thrones when you can tune in to Dabiq and watch it for real?

It is in this market of ultra-violence and ennui that the BBC has made perhaps one of the most compelling documentaries on the Syria/Iraq conflict, which has the compassion to let the victims of this whirlwind of violence talk, and the humanity to empathise with them.

Stacey on the Frontline: Girls, Guns and ISIS follows BBC Three presenter Stacey Dooley as she embeds herself with a unit of Yazidi women being trained to fight for the Kurdish Peshmerga. It is not typical highbrow fare. Dooley’s documentaries are more often after-pub diversions full of sex, drugs and alliteration, with titles including Booze, Bar Crawls and Bulgaria or Crime, Carnage and Cancun.

But, over several years, Dooley has also shown herself to be a brave and tenacious journalist. She’s reported on murderous gangs in Honduras and conducted a live interview with Colombian drug smugglers in their cocaine-processing lab.

Clearly, Dooley has fantastic fixers and prodigious producers to help put her in these situations, but what she also has in spades is a naivety and bravery that audiences and interviewees find totally charming.

This proves vital in helping the Yazidi women she is embedded with talk about their experiences. At a time when journalists are expected to act more like a natural history unit – to observe, question but never interact – Dooley does the opposite, and the results are utterly compelling.

Hence when she is sitting in a dormitory chatting on one of her interviewees’ beds, and the talk suddenly turns to an ISIS commander butchering a baby and making the Yazidi mother eat it, the inference is that this happened to real people, like us and like Stacey, not refugees or the perennial dusky victims we can easily forget after watching the world’s latest atrocity.

Likewise, when she is looking through photos on another girl’s iPhone, hardly a journalistic trope, the gossip moves on to an anecdote so harrowing both women leave the room in tears. It was impossible not to think of the 3,000 Yazidis who are still held by ISIS.

We’ve known about the Yazidis since they were nearly ethnically cleansed on Mount Sinjar two years ago. And they were the subject of an award-winning Dispatches documentary. But this feels like the first time those actually held by ISIS have been given a voice.

The documentary is brilliant at communicating the situation as it stands in northern Iraq. It is now sometimes hard to remember, given the dripfeed of terrorist plots taking place in Europe, that ISIS’s main aim has always been local and sectarian – the establishment of a Sunni state in Iraq and Syria.

Therefore when the interviewees talk of their experiences, from being bought by ‘an Arab from Tal Afar’ to being treated as sub-human because they are Yazidi, the true horror hits home. Ordinary, local people are supporting ISIS, not just mad jihadis from Europe. This becomes far more apparent here than in typical news reports.

While most war correspondents are of course fantastically brave, another aspect of Dooley’s style is that she’s refreshingly unmacho. Her response to doing a bit of light military training is to complain about her sports bra. On hearing mortars being fired by her own side she ducks, shouting ‘fucking hell’. While this is clearly entertaining, it also feels absolutely honest and brings her much closer to her audience.

In fact, Dooley’s style feels much more appropriate for the Yazidi women she is interviewing. For all the atrocities they have suffered and their desire for revenge, they are young women as well as soldiers. ‘It’s kind of like a summer camp; listening to music, platting each other’s hair’, she tells the camera before jumping on to a bunkbed to join in.

Again, this is oddly uplifting. It suggests the Yazidis’ lives do not have to revolve around them being victims of the tragedies they have suffered. Certainly, Dooley does not treat them as victims. For all her natural empathy during interviews, she seems happiest when she is allowed to muck in as one of the girls.

At the end of the documentary, she talks about receiving a present of purple lipstick from one of the unit. A more earnest reporter might say that she would cherish it as a memento. ‘I didn’t have the heart to tell her I’d probably never wear it’, is Dooley’s response.

One suspects Susan D Moeller would not be a fan of Dooley. After all, she breaks all the rules laid down to make journalism impartial. However, Dooley overcomes our compassion fatigue simply by showing a little more compassion. With her naivety and natural empathy, Stacey allows her post-pub audience to realise that, after all the terror in the Middle East, we do have some common humanity left.

Stacey on the Frontline: Girls, Guns and ISIS is available on BBC iPlayer.