Merkel as the saviour of liberalism? God help us

Trump-fearing liberals need to get over their Merkel fantasies. 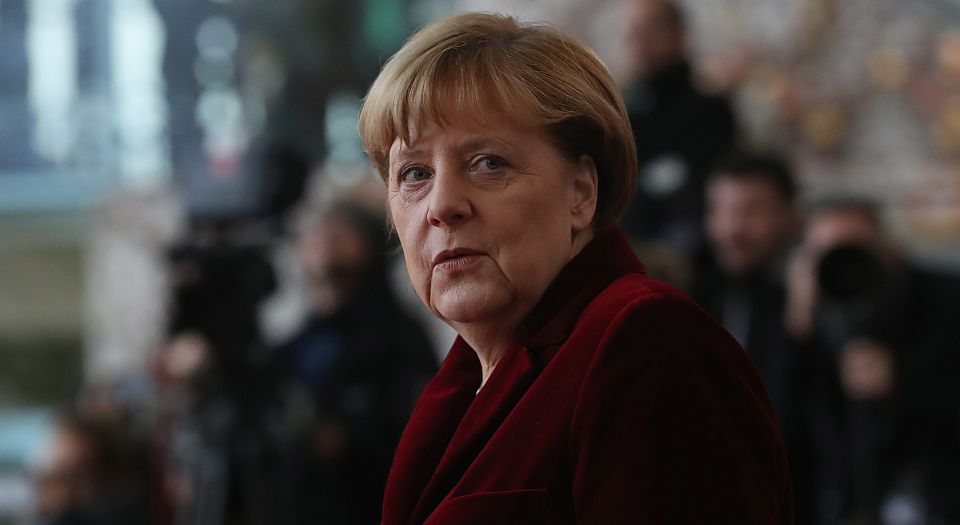 I wasn’t surprised when Angela Merkel announced on Sunday that she would stand for a fourth term as chancellor. She said she felt compelled to take this step because of a difficult world situation, and because the West ‘needs to focus itself anew, following the elections in America’. In linking her decision to wider developments, also including the refugee crisis and Britain’s decision to leave the EU, she was echoing what many commentators have been saying for some weeks: that in these strange times, Merkel is a pillar of stability.

‘She is the last one standing… the last wall, and people want to lean against it’, said Merkel biographer Stefan Kornelius, in an interview in a New York Times piece titled ‘As Obama Exits World Stage, Angela Merkel May Be the Liberal World’s Last Defender’. This is a view many in Germany share. ‘Now Merkel is needed’, the liberal-left Berliner Zeitung wrote following Donald Trump’s victory. The paper praised Merkel for setting herself apart from Trump by lecturing him on the common German-American values of ‘respect for the rule of law and the dignity of each person regardless of their origin, skin colour, creed, gender or sexual orientation’. Rather than thinking about what such a statement might mean for future relations between Germany and America, commentators took it as proof of her steadfastness and liberal attitude.

We should be worried when someone like Merkel is held up as the last hope for liberalism. The first thing we should remind people of is that she actually lacks steadfastness. Indeed, what has most characterised her chancellorship has been her willingness to adapt and re-adapt her politics according to what is seen to be necessary or preferable at any particular time.

Thus she went from being a supporter of nuclear energy to a critic of it in a stunningly short time. In the spring of 2011, less than six months after her government had extended the lifespan of Germany’s nuclear power stations, Merkel announced the phasing out of nuclear power stations – justified, spuriously, by the accident in Fukushima. She has also changed her stance with regard to refugees. In an insightful piece in Berlin Tagesspiegel this week, Stephan-Andreas Castorff writes: ‘In the refugee crisis, the chancellor has shown how she governs. She began in a humanitarian way, so that even her opponents started to love her, and she ended with an unexplained turn. Positively reactionary, with one of the harshest asylum laws in the history of the Federal Republic of Germany.’

Indeed, even as Germany was celebrating its opening of the borders to Syrian refugees in 2015, Merkel’s government had started the process of tightening immigration laws. Then in early September 2016, she said one of her main priorities was the speedy expulsion of migrants without resident permits. ‘Deportations, deportations, deportations’, she was quoted as saying. Of course, Merkel is reacting to the intense pressure the refugee crisis has put on her government, and the country. And yet this turnaround is typical of her style, which tends to be changeable and also wary of too much debate: the new asylum laws were imposed in much the same way as the borders were first opened – without engaging with the electorate.

There’s another reason why appealing to Merkel to stand up for liberal values is extreme wishful thinking: her government has felt exhausted for years. One of the most striking things about her announcement that she would run again was how downbeat it was. Merkel’s style has always been dry and undramatic, and she has never made any election promises (her slogan in 2013 was ‘They know me’). However, this time around she didn’t only avoid presenting any long-term visions – she also cautioned against any high hopes. Kicking off by saying how difficult the decision to rerun had been, she then said: ‘No person alone, even with the greatest experience, can turn things more or less to the good, in Germany, Europe, in the world. Least of all the chancellor of the Federal Republic of Germany.’

Some commentators see these comments as confirmation that Germany cannot and will not play the role of a hegemonic world power. But Merkel notably also said it is difficult for her, or anyone, to make things better in Germany itself, not just the world. Can you imagine any other person running to be German chancellor – Willy Brandt, Helmut Schmidt or even Helmut Kohl – saying they thought the office itself couldn’t do much good? It’s no wonder Merkel’s announcement was met with so little enthusiasm. ‘Of course, Merkel still believes she can give something to the country, but what?’, asked TV presenter Hubertus Volmer.

None of this means Merkel won’t be elected again. She remains Germany’s most popular politician. But much has changed in recent months. With the dramatic rise of the right-leaning Alternative für Deutschland (AfD), the limitations of the pragmatic, unpolitical managerial style of the mainstream parties have become more exposed. We can’t blame Merkel alone for these developments. Those now appealing to her to take the lead and defend Western liberalism are also at fault. Much of the German liberal-left has thrown its lot in with Merkel – and are delighted that she has made some of their ideas a reality, from phasing out nuclear to abolishing conscription to recognising homosexual partnerships – and in the process they have ignored many people’s feeling of discomfort with the narrow status quo. The notion that Merkel could save Germany and the whole Western world speaks to a reluctance to engage with the crisis of the old political order and what might be causing it.

The rise of the AfD is not simply down to Merkel’s handling of the refugee crisis, as some claim. Long before that crisis, including when Merkel stood for election in 2013, significant sections of the German population simply abstained from voting. Did any of the people who are now distressed by ‘the end of liberalism’ attempt to find out why? Did they make an effort to engage with people? No, they did little more than pursue their own narrow, often very middle-class interests. Viewing Merkel as saviour is yet another avoidance strategy, which blinds people to what is causing political upheaval across the West.