An ‘illegitimate’ attack on Trump voters

Demands to ‘uphold the popular vote’ are a coded attack on the people. 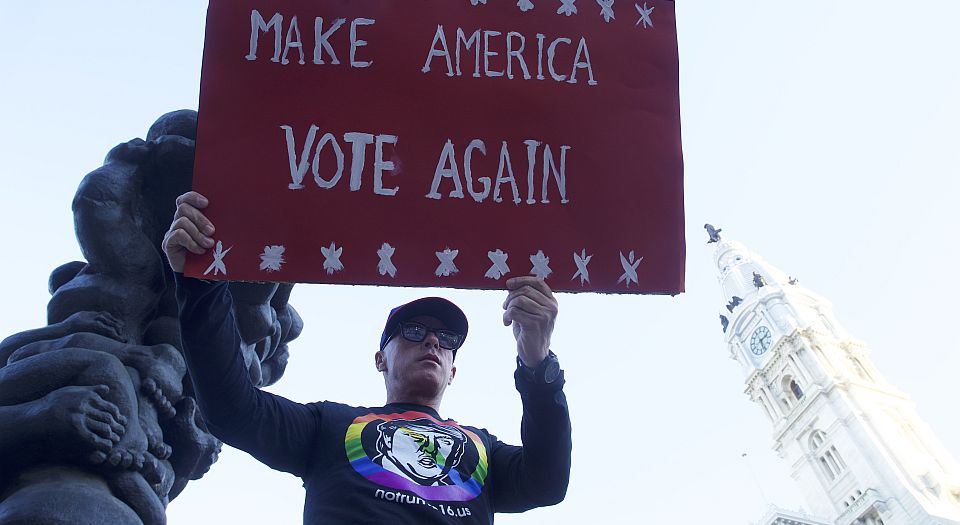 A fortnight after Donald Trump won the American election and became president-elect, many are still trying to prevent the Republican victor actually being elected president of the United States.

Almost as soon as the overall result of the 8 November elections became clear, the cry went up that Trump would not be a legitimate occupant of the White House. Filmmaker and Hillary Clinton cheerleader Michael Moore spoke for many top Democrats when he denounced The Donald as ‘an illegitimate president’ who ‘does not have the vote of the people’.

Anti-Trump protesters angrily pointed out that, while the Republican candidate had won a majority in the electoral college — the system the US uses to elect its president indirectly — Democratic Party candidate Clinton had won a larger share of the popular vote. (Though the final votes are still being counted, it seems likely that Clinton could end up with over a million votes more than Trump – about one per cent of the total votes cast.)

Within days of the election, a Washington Post-ABC poll found that one-in-three Democrat voters believed Trump’s win was ‘illegitimate’, with 27 per cent of them feeling ‘strongly’ about it. Those feelings appeared strongest within the metropolitan strongholds of the Democratic elite, where media-focused protests against the result were concentrated.

Now online petitions are gathering support, calling on the 538 members of the electoral college to go rogue and refuse to endorse Trump when they all congregate on 19 December. He needs the support of 270 electors to be confirmed, and has almost 300 on paper. But it remains theoretically possible for enough members of the college to act as what are called ‘faithless electors’ and endorse a candidate whom the voters in their state did not support.

The biggest petition of this sort on Change.org has apparently now gathered almost 4.5million signatures, demanding that the electoral college make Hillary Clinton president because ‘SHE WON THE POPULAR VOTE’. Meanwhile college electors report being ‘bombarded’ with phone calls, emails and social-media messages calling on them to vote against Trump. Some Democrat electors themselves admit to lobbying for their counterparts in the college to vote for ‘Anybody But Trump’ and switch support to a more ‘respectable’ Republican such as Mitt Romney.

Two points in response to all of this: Firstly, yes, the electoral college represents a strange, distorted brand of representative democracy. That is precisely why it was established in the first place – to provide a potential brake on popular sentiments of which the US elites do not approve. Secondly, however, there is little that is democratic about the sudden upsurge of protests about the US system. Those who are happy enough with the electoral college when it delivers results they want are simply furious because it has allowed for the election of the despised Donald. Indeed, their demand for 538 members of the electoral college to overturn the votes of ‘ill-informed’ Trump voters represents the new face of anti-democratic politics in the US and the West.

The Founding Fathers who led the American revolution against British rule from 1776 and established the US as an independent republic were fearful of ‘too much’ popular democracy. They created a system of checks and balances that could, if necessary, restrain the people in the name of representation. The powerful Supreme Court is one arm of this system. Another is the Senate, the upper chamber of Congress which gives two seats to every US state, regardless of population size, and thus enables smaller, rural and generally more conservative states to counter-balance the big urban centres.

And another elitist arm is the electoral college, through which electors, nominated from each state on the basis of the election result, cast the final vote for the next president. This likewise favours conservative smaller states and also gives a few hundred electors — members of the political establishment appointed by the major parties — the potential to overturn the election result.

The electoral college has never done that, although there have now been five elections where the new president lost the popular vote. The most recent one pre-Trump was in 2000, when Republican George W Bush became president despite winning fewer votes than Democratic challenger Al Gore. Some researchers claim there was also a sixth occasion, in 1960, when Republican Richard Nixon might actually have won more votes than iconic Democratic president John F Kennedy, but the close-run result was left ambiguous by the confusing electoral system in the state of Alabama.

Despite the electoral college’s evident democratic shortcomings, however, there have been few serious attempts to reform it. America’s powerful elites still prefer a system with inbuilt brakes that can prevent popular sentiment running riot.

The sudden outburst against the ‘illegitimate’ election result is really no more democratic than the electoral college itself. Few of those protesting or signing petitions were concerned about the system until it enabled Trump to win. Indeed, before election day, these were the people outraged by Trump’s suggestion that he might not recognise the result if he did not win.

Now, overnight, some Democrats would have us believe they are genuine democrats who just want to uphold the popular vote. How? By using the undemocratic electoral college to overturn the election result. Their loud talk of Trump being an ‘illegitimate’ president is really a coded attack on the millions of deplorable Americans who cast their ‘illegitimate’ votes for him, rather than being any principled defence of American democracy.

Endorsing claims that Russia somehow ‘hacked’ the US election ‘to promote a Trump win’, one liberal blogger has announced that ‘the only Constitutional solution available to us is for the electoral college to serve the function that the Framers intended for it, namely to serve as a check on elections gone wrong’. Thus the radical wing of American liberalism lines up with the most conservative Founding Fathers in their determination to halt the wrong election results.

What ultimately unites them is the fear and loathing of ordinary voters whom they cannot comprehend.

As noted elsewhere on spiked, a widespread response to the US election has been to brand Trump’s win a ‘whitelash’ fuelled by overt racism – despite the fact that Trump won a lower proportion of white votes than Romney in 2012 and that, as one rational anti-Trump blogger observes, ‘The only major racial group where he didn’t get a gain of greater than five per cent was white people’. Like the talk of the election result as illegitimate, the nonsense about a win for ‘white supremacy’ is a way of trying to remove moral legitimacy from millions of voters.

Of course, Trump is no champion of American democracy – commentators have been having fun unearthing his tweets calling for a ‘revolution’ to overthrow Obama’s win in 2012. He is an illiberal buffoon who poses a potential threat to precious liberties such as freedom of speech.

But the backlash against ‘racist’ or otherwise ‘illegitimate’ Trump voters is no solution – a sham defence of democracy that is just another attack on the independence of the demos, the people. Anybody must have the legitimate right to protest against a president they don’t support or to demand genuine democratic reforms. Demanding backroom deals among the political elite to overturn an election result you don’t like, however, is potentially more dangerous to the future of democracy than President Trump.