A smear on Brexit

Farage is propagating the myth that Brexit = Trump. 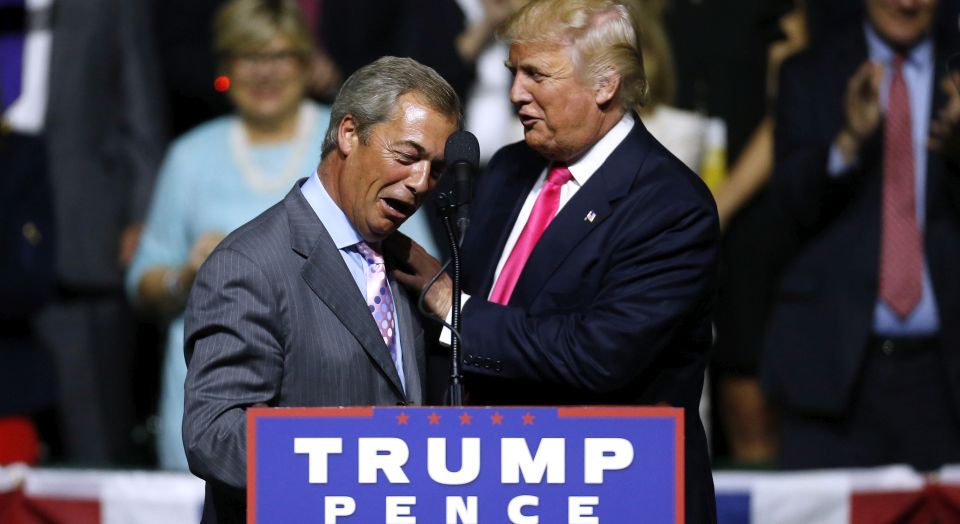 In the months since the EU referendum, we’ve been told that no one knows what Brexit means. That ‘Brexit means Brexit’, Theresa May’s not-quite-reassurance that the referendum vote would be upheld, is meaningless. This is how spurned Remainers have tried to dilute the vote, and make nonsense distinctions between Soft Brexit (aka Not Brexit) and Hard Brexit (aka Brexit). But if politicians claim not to know what Brexit means, there is one matter on which they’re in complete agreement: that Brexit means Trump. And maybe even Marine Le Pen.

Following Trump’s election, shameless, shallow comparisons have been made between the perma-tanned demagogue’s rise to the White House and the Glorious Referendum. It’s re-energised the anti-democrats, fuelling their campaign to overturn or undermine the Brexit vote. Polly Toynbee, doyenne of the demosphobes, has said that ‘Brexit and Trump mark a whitelash’, an ‘Us and Them’ mentality that will ‘infect Britain’s political psyche’ – that is, turn soft-headed voters into goose-stepping fascists, if they weren’t already. Meanwhile, William Keegan put his cards on the table: ‘Trump’s election reinforces the need for Britain to turn against Brexit.’

Irritatingly, there are some Brexiteers willing to collude in the Brexit = Trump myth. Nigel Farage, interim UKIP leader and self-styled king of the little people, rallied behind The Donald. He appeared with him on the campaign trail in Mississippi. He tweeted on election day that he was ‘hand[ing] over the mantle’ to Trump. And, over the weekend, he wound up Whitehall by becoming the first foreign politician to meet with the president-elect – speaking for an hour about ‘freedom and winning’ and posing for photos in Trump Tower’s Great Gold Elevator.

The Brexit-Trump claim is a convenient fiction for both Farage and his myriad haters. After the referendum, and seven failed attempts at a seat in parliament, Farage is shopping around for new legitimacy. This isn’t just about his next job – be it as an improbable mediator between Washington and Westminster or a host on Trump TV. He’s trying to gain political purpose by positing himself as the ‘catalyst’ for a global fightback against the establishment. Meanwhile, the liberal media can pose as the guardians of civilisation, against the ale-swigging pussy-grabbers at the gates.

Let’s cut the crap. Brexit does not equal Trump. The Brexit vote was about self-determination. It wasn’t about endorsing one individual, or one set of policies; it was about doing politics differently, about the people clawing back control from the technocratic elites in both Brussels and Whitehall. Trump’s election was a blow to the establishment. But it has only outsourced the bubbling, anti-establishment fervour to one individual – an authoritarian opportunist, at that. And seeing as Trump has already smashed the record for pre-inauguration rowbacks, there’s a good chance he won’t be the swamp-drainer many hoped.

There is one thing both the Brexit vote and the Trump phenomenon share: they revealed a crumbling establishment. They revealed just how little public influence the elite now wields. The entire media, business and celebrity elite closed ranks around Remain and Hillary. They talked up Armageddon if the plebs didn’t do as they were told. And the public ignored them. Both Trump and Brexit voters cracked open the establishment. But whereas Brits now have an opportunity to carve out a new politics, to shape their destinies, many Americans have sadly thrown their lot in with a charlatan.

Trump’s election is not an endorsement of Trumpism per se. While he spoke to long-ignored concerns about trade and immigration, interviews with Trump voters show that few were fully convinced by him, much less did they agree with his more unsavoury views. It speaks to the dearth of political alternatives in the US, and the disorientation of America’s white working class, that jumping aboard Hair Force One proved such an attractive proposition. Britain’s left-behind masses were given an opportunity to rot the lot and start afresh. Rust Belters were left with a blunt instrument, and took a swing.

Trump is not Mr Brexit. And neither is Farage. The claim that Farage delivered the referendum gives him way too much credit, and the public too little. At the last election, UKIP got 3.8million votes – Brexit got 17.4million. And the claim that Brexit would boost the Kippers has proved a fantasy: five months later, UKIP is still mired in an endless sub-reality-TV leadership race. That Farage remains voice of the people by default speaks to how much work there is left to do in carving out a real lasting vehicle for the people’s post-Brexit passions.

We are in the midst of an anti-establishment uprising. But crude dot-connecting between Trump and Brexit only serves those who want to reduce what’s going on to a transatlantic plebian howl, and those opportunists looking to big themselves up. Over the weekend, in an interview for The Andrew Marr Show, Front National leader and French presidential hopeful Marine Le Pen posited herself as the third part in the trilogy. We can’t let that lie. That’s a smear on Brexit, and Trump voters too, and it’s a boon to those who want to use this anti-establishment moment to close down politics, rather than open it up.