Revenge of the deplorables

Our US correspondent on Trump and the death of the establishment. 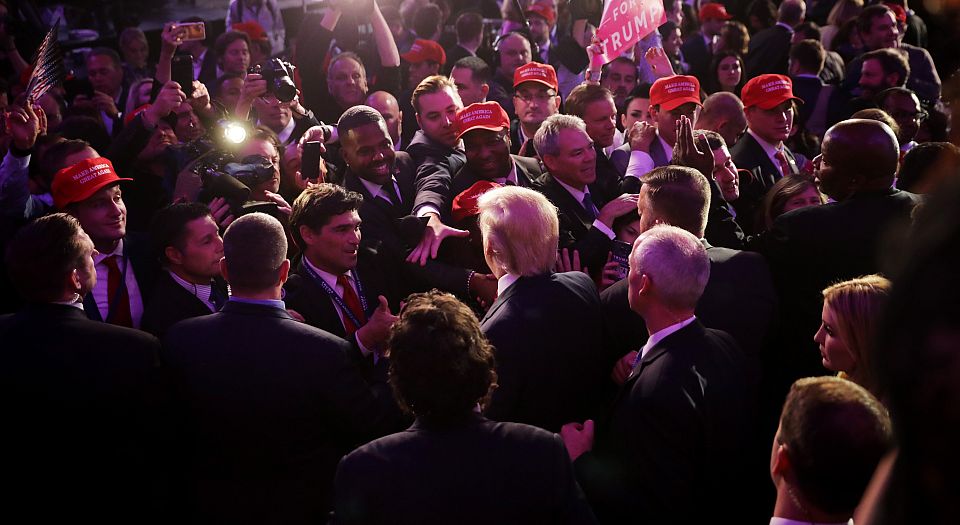 Wow. In a shock to the world, Donald Trump has upset expectations and become the next president of the United States.

Millions of Americans took the presidential election as an opportunity to express their desire for change. This result was about much more than Donald Trump. Most of his voters believe he is unqualified and lacks the temperament for the role. The people used him as a vehicle to send a message to the American elite. The masses may not know exactly what they want, but they are clear that they want the old establishment to get out of their way.

The vote for Trump was a vote against Washington and other institutions. But this revolt against the elite is not limited to politics. The vote for Trump represents a broadside against the cultural elite as well as the political elite. For more than a decade, the people in the ‘flyover’ country, the working class, have been made the butt of jokes. This patronising attitude carried over into the election campaign, and the turning point came when Hillary Clinton wrote off millions of Trump backers as ‘deplorables’. In response, people embraced the term, and proudly wore t-shirts bearing the words ‘I’m a deplorable’. This vote was their payback.

As the results were coming in, Democrats started to blame Clinton’s loss on hordes of racists, sexists and assorted stupid people across the country. Economist and New York Times columnist Paul Krugman tweeted: ‘I truly thought I knew my country better than it turns out I did. I have warned that we could become a failed state, but didn’t realise that it wasn’t just the radicalism of the GOP, but deep hatred in a large segment of the population.’ Writer Jill Filipovic tweeted: ‘Eight years of a black president followed by a female president was too much of a threat to white male authority.’ Such condescending views of Middle Americans are exactly what’s driving support for Trump; liberals doubling-down on their prejudices in the aftermath of the election will only make divisions worse.

We at spiked didn’t want Trump to become president. He is an illiberal demagogue, and now a disaster waiting to happen in the White House. It is deeply sobering to think that someone so incompetent could lead the world’s superpower.

But the blame for this outcome lies squarely with the establishments of both the Republican and Democratic parties. Our elites have been exposed as empty suits, flailing in response to Trump. The Republicans were too weak and in disarray to stop Trump, with their 16 lame presidential contenders knocked out one by one. They effectively let Trump hijack their party.

The Democratic bigwigs were arguably too strong, maintaining a bureaucratic iron-hold on the nomination process. Very early on, they conceded to the Clinton machine, and all potential contenders were too cowardly to challenge her and point out what was obvious to the world – that the empress had too much baggage. In retrospect, the arrogance of the Democratic elite – nominating a throwback to the 1990s, scandals included – was astonishing.

One of the most remarkable features of Trump’s amazing rise was how little political opposition he faced. First Republicans, and then Clinton, focused on the man himself, rather than his arguments on immigration, trade or terrorism. In this, they underestimated the voters, who were looking for more substance.

As I noted on spiked in August, it was a mistake for Clinton to demonise Trump, and hope to win by simply saying he is beyond the pale: ‘If [Hillary] cannot find a positive message that genuinely inspires, that addresses the concerns of the left-out masses, then many will feel they have nothing to lose by choosing Trump. And she and the Democrats will have only themselves to blame.’ It gives me no pleasure to say that this has now come to pass.

If there is anything positive to take from Trump’s victory, it is that he has exposed the chasm between the people and the elites. His win highlights the utter complacency of the elites, the media and the pollsters. The polls were not as bad as pundits are now saying; the potential for a Trump win was visible for all to see (the margin was very close in many key states). The fact is that people didn’t want to believe it, they thought it was inconceivable – even as it was blindly obvious that Clinton was not inspiring most Americans. Even Obama made it sound like a chore to vote for her: ‘Not everything is supposed to be inspiring. You just do what you have to do.’

What’s crystal clear now is that the supposedly mighty US and Western establishments are paper tigers. They have become lazy and arrogant, and they are out of touch with the mass of people; they have lost all sense of purpose. Our political elites can’t even convince people that they have more to offer than a buffoon and two-bit conman with back-of-the-envelope policies. It has never been clearer that we cannot lean on this establishment; it is a completely unreliable alternative to the likes of authoritarians like Trump.

Trump doesn’t deserve the support of all the working people who have voted for him – he’s playing them. He will not deliver on his boasts, and he will exacerbate divisions in society. It has never been clearer that we need to wipe away the old, useless establishment, and build a new politics from the ground up, one that puts the needs of the masses first. If the election of Trump hastens that process, that will be a silver lining.