Neither Trump nor Clinton

Our American correspondent on why neither deserves your ballot. 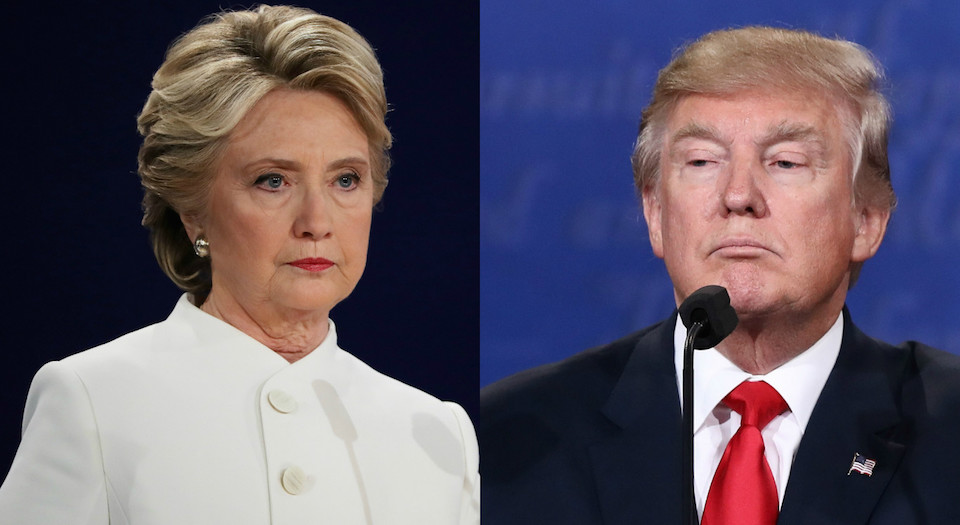 Donald Trump or Hillary Clinton? This is a choice that most Americans wish they didn’t have to make. Sure, passionate crowds greet Trump, and you can find those who are genuinely thrilled at the prospect of Madam President. But throughout this election, the most striking fact has been this: for the first time in modern polling, a majority considers both candidates as dishonest and unfavourable. For many, the choice is an awful, negative one: who do you most want to vote against, rather than who do you want to vote for.

If people had negative impressions of the two candidates from the start, the campaign has only solidified their assessments. It is safe to say this has been the ugliest campaign in living memory, favouring personal mudslinging over issues of substance. Many like to put the crude character of the campaign down to the vulgar Trump, but both candidates have driven the tone lower. ‘When they go low, we go high’, said Hillary, echoing Michelle Obama. No, when they went low, Hillary went to the fat-shaming of Miss Universe, an undercover Access Hollywood ‘pussy-grabbing’ video, and a message that a vote for Trump was a vote for the Ku Klux Klan. It is perhaps not all that surprising that more than 80 per cent say the election has made them feel disgusted with politics.

In the popular talk, the electoral choice is posed as: which do you prefer — crazy or corrupt? There are elements of truth to those characterisations – Trump is erratic and insulting; Clinton has a history of shady dealings – but, from a political perspective, the reality is actually worse.

Trump isn’t just a showman who shoots his mouth off; he’s not just someone who is monumentally ignorant of economics and politics. He also displays a dangerous authoritarian streak, tossing out threats to persecute journalists and throw political opponents in jail. If you took him at his word, he would engineer the deportations of millions. His claim to have opposed the Iraq War is dubious, but he exhibits no restraint for future, undefined militaristic adventures. His answer to political correctness is to plead more loudly than others, to cry ‘listen to my grievances, not theirs’.

Trump’s flaws are easy to see – as the saying goes, they are a feature, not a bug. Clinton’s weaknesses, in contrast, are less well understood. This has been especially the case in the past two weeks, when liberals have put out a fatwa on anyone who would whisper a dissenting word about Clinton (don’t mention the emails!), lest young people won’t go to the polls and keep the fascist Trump out of the White House. And to the extent that criticisms of Clinton have emerged, they have tended to centre on accusations of dishonesty and corruption. From the right, we hear about the pay-to-play Clinton Foundation; from the Bernie Sanders left, the highly paid speeches to Goldman Sachs.

According to Clinton supporters, she is an obvious choice over Trump: she is the safe pair of hands over that reckless and unpredictable man, the competent public servant over the in-over-his-head reality-TV star. Can you imagine allowing Trump access to the nuclear codes?

Hillary and her supporters are essentially saying that she represents an establishment approach, the mainstream, and therefore she should be trusted. This outlook might seem like common sense, but it wilfully ignores how she and her fellow establishment types have led us into the current predicament. Clinton has endorsed every bad decision over recent decades that has led to popular disenchantment with politics, from the Iraq War to financial deregulation and bailouts to mass incarceration. As many have noted, she is a foreign-policy hawk, whose bad judgment to intervene in Libya had disastrous consequences for the people of that country, and sowed the seeds of further ISIS expansion. But her approach is also deeply conventional; she is something of a weather vane for establishment opinion. She supported the Iraq War when all others did, then opposed the surge in Iraq when it was safe to say so. She was a dove on Russia when others were, and now she is playing with fire as a Russia hawk, in line with the current foreign-policy elite.

At a recent rally, Clinton warned how Trump could start a war: ‘Imagine how easily it could be that Donald Trump will feel insulted and start a real war, not just a Twitter war at 3 o’clock in the morning.’ But Clinton’s entire history is one of starting wars, and a future intervention in Syria and elsewhere is entirely predictable. All in all, the conventional wisdom underestimates the recklessness and risks associated with the current establishment course, which Hillary Clinton epitomises.

Everyone stresses how different Trump and Clinton are, as if they were polar opposites. While of course there are big differences, this view misses how mutually supportive they are of one another. Through the course of the campaign, each at times seemed seriously damaged, but then disaffection with the other kept them afloat. In a typical year, Trump’s wild statements would disqualify him; in a normal election, Clinton’s whiff of scandal would be deadly.

But there is a more fundamental way in which they are mutually dependent. You could say that Hillary created Trump, and that Trump drives people back to Hillary. Clinton is the very definition of establishment, and it is establishment policies — coming from both the Democratic and Republican parties — that have created a ‘populist’ backlash. The rise of both Trump and Sanders, in their own and different ways, has exposed deep discontent with the political elite of both parties. In the case of Trump, this response takes a backward and bigoted form, but his strength comes from his core support of the white working class, those who have been ‘left behind’ by Clinton-supported policies and have legitimate concerns that can’t be reduced to the peculiarities of a conman who claims to speak for them.

Many are rightly repulsed by Trump, and Clinton has benefited greatly from that. Those who were initially critical of Clinton have found themselves coming back to her camp. But a narrow focus on Trump as the greater evil over Clinton ignores how her politics generated the discontent behind the rise of Trump, and how a vote for her will not solve that. Indeed, as Hillary’s disparagement of Trump supporters, her dismissal of them as ‘deplorables’, shows, she is only going to make matters worse. Rather than embrace one or the other, we need to break this cycle which generates support for both of them.

Clinton’s campaign has been relentlessly negative about Trump, and mainly about how unfit her opponent is for office. Her case boils down to ‘I’m not Trump’. We know that Trump’s argument has always been essentially negative — burn it down, make America great again (because it’s not great at all now). Hillary promised us a more positive vision, but it never emerged. It was telling how President Obama tried to convince his daughters over the dinner table why they should vote for Hillary: ‘Not everything is supposed to be inspiring. You just do what you have to do. And one of the things you have to do right now is vote for Hillary Clinton.’ Now there’s a stunning endorsement. Don’t we deserve better than this? Something more uplifting than ‘one of the things we have to do’?

Despite what many say, we don’t need to choose between Trump and Clinton. You can be opposed to both, as spiked is. There is no moral requirement to vote for one or the other. There is more of a moral argument to vote for who you believe in, rather than endorse two flawed choices. It’s better to have some self-respect, to not get dragged down to the level of their depraved campaign. Candidates ought to earn our votes, not gain them by default.

So, if you’re American and heading to the voting booth, don’t feel obliged to vote for Trump or Clinton. You can vote for a third candidate, or leave it blank. But whatever you decide, know that, if you want the fullest freedom and highest living standards for all, we’ve got a battle on our hands after the election, whoever wins.