Trump’s instinctual illiberalism is of a piece with our backward laws. 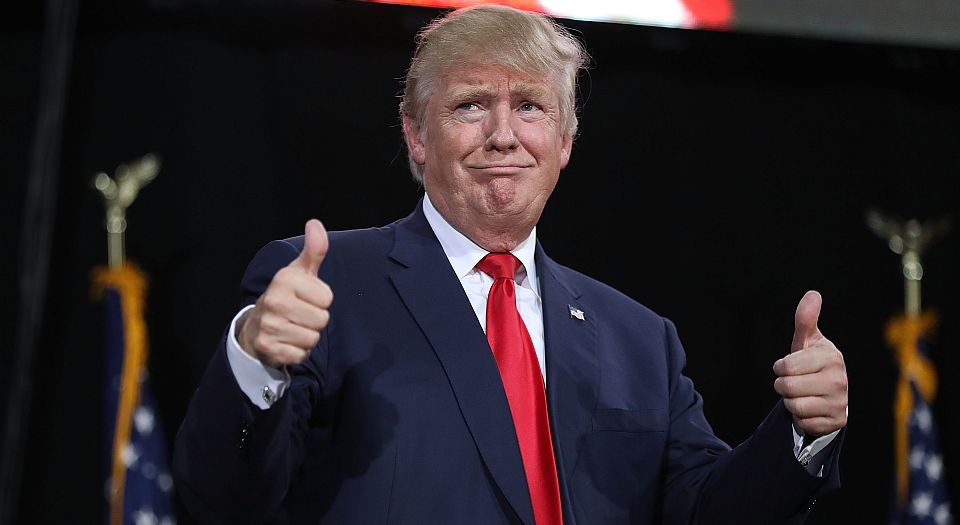 So it turns out that Donald Trump, self-styled enemy of the joyless speech-police, is a fan of England’s libel laws. Which are among the most archaic, censorious laws in the Western world. If that doesn’t shoot down the myth of Trump as rehabilitator of American values, the key American value being freedom of speech, then I don’t know what will. It should also give pause for thought to those Brits shaking their polite, coiffured heads over Trump’s crude style. That England’s libel laws are admired by this man suggests his blabber-mouth illiberalism might not be quite as foreign, quite as un-English, as some think. Both Trump and Britain are indicted by his pro-libel law comments.

Trump’s libel-law envy came in an interview with CBS on Sunday. Frustrated by his inability to sue the women and the press claiming he has carried out sexual assaults in the past, Trump said he wished America’s libel laws were more like England’s. ‘In England they have a system where you can actually sue if someone says something wrong’, he said. In America, by contrast, ‘our press is allowed to say whatever they want and get away with it’. How much better it would be if in the US too you could sue people who make ‘terrible, terrible mistakes, and those mistakes are made on purpose to injure people’. Shorter version: I’m sick of being ridiculed and I want to take my ridiculers to court.

That Trump is itching to sue his press critics – of which there are undoubtedly many: the press is indeed very anti-Trump – is not that surprising. This is a man who, for all those caps saying ‘Make America Great Again’, and all the claims of his campus fanboys who see him as the outspoken enemy of a feministic, white-man-hating culture of ‘STFU’, doesn’t understand the first thing about freedom of speech. He has suggested America should shut down the internet in Syria and Iraq to prevent ISIS from spreading its propaganda, seemingly unaware that this would also devastate brave dissenters such as Raqqa is Being Slaughtered Silently who use the internet to make the case against ISIS and for greater freedom. That is, like every aspiring censor in history, he doesn’t realise what a crude weapon censorship is, and how it harms the sensible as well as the crazy. And he has complained numerous times about the lack of censure of press outlets that get things wrong or are simply stingingly critical of politicians. In August he thundered that ‘it is not “freedom of the press” when newspapers are allowed to say and write whatever they want even if it is completely false’. Later he suggested he would ‘loosen’ America’s libel laws in order to punish those who ‘write badly’ about him.

Now, with his pro-English libel law remarks, he has shown just how antsy he is about free speech. Admiring England’s libel laws, or cheering their use to punish those who say controversial or unflattering things about public figures, is a sure sign you’re on the side of the cowardly and censorious rather than of liberty. England’s libel laws are weighted heavily in favour of the person – usually someone extremely wealthy – doing the suing. Indeed, the burden of proof falls on the defendant. He must prove he is innocent of making wrong or malicious statements, rather than the claimant proving he is guilty, which warps the central principle of civilised justice: that the accused is innocent until proven guilty. What’s more, demonstrating that you genuinely believe that what you said is true is not a defence in English libel law. The end result of this unjust, censorious law is that public debate is chilled: British media outlets and publishers sometimes kill edgy stories for fear of ending up before m’lud with not even the presumption of innocence to protect them.

Yes, there have been reforms to England’s libel laws recently, which mean the claimant has to demonstrate, rather than merely assert, that the words he’s complaining about caused him substantial harm, and which also promise to make it more difficult for wealthy foreigners to sue their critics in London, as many do, because they recognise how favourable to angry, illiberal oligarchs and plutocrats England’s libel laws are. But even reformed, these laws remain a menace to free speech. That Trump admires them should make those who believe he will restore American values think again. He seems more determined to re-import the values of the old colonial power. There’s an anti-Trump pisstake cap that says ‘Make America Great Britain Again’ – it seems Trump wants to do that. He’s running counter to much liberal thought in the US, where there’s such disgust for what one court called England’s ‘repugnant’ libel laws that many courts will not enforce English libel judgments against American citizens.

The situation regarding defamation in America is far better than in England. As it happens, Trump is wrong to say American public figures can’t sue if the press makes ‘terrible, terrible mistakes’ about them. They can, but it’s hard. The 1964 Supreme Court ruling in New York Times vs Sullivan – which sprung from an Alabama official’s suing of the New York Times (Trump also recently threatened to sue the NYT) – outlined the narrow conditions in which a public figure might successfully sue an alleged defamer: in essence when someone has said something about him that they know is untrue and which they said for malicious reasons. Strikingly, the Sullivan ruling stood up for the right of the press, and the public, to be wickedly critical of political figures. ‘[D]ebate on public issues should be uninhibited, robust and wide open’, it said. And, yes, such debate will include ‘vehement, caustic, and sometimes unpleasantly sharp attacks on government and public officials’, but that’s the (small) price we pay for freedom of speech. Importantly, radically, Sullivan defended the right to get things wrong. It said ‘erroneous statement is inevitable in free debate, and… it must be protected if the freedoms of expression are to have the “breathing space” that they need to survive’.

So, the press, and people, should be free to be caustic and unpleasant and even to make mistakes in the course of ‘wide open’ debate. Such a liberal cry for uninhibited chatter would no doubt make Trump nauseous – and he isn’t alone. His admiration for English libel law has exposed how much he has in common with many in supposedly respectable England. Indeed, MPs here have recently sought to ‘reclaim the internet’ from those who, to use Sullivan’s words, are ‘vehement, caustic and sometimes unpleasantly sharp’, or what we must now refer to as ‘trolls’. Guardian writers, sworn enemies of Trump, last week bemoaned the failure of the Independent Press Standards Organisation to punish the Sun over Kelvin MacKenzie’s caustic column about a Muslim newsreader, unwittingly showing their own Trumpite colours. Hillary’s backers in the press constantly rail against ‘vehement’ coverage of their candidate, using social pressure rather than libel law to limit robust, uninhibited discussion.

It’s good that Trump said what he did about libel, for it shows how illiberal he is, and how illiberal England is. The denunciations of Trump coming from certain quarters in England cannot disguise the fact that when it comes to the desire to crush rough, angry or erroneous public discussion, Trump and too many of his haters are often as one.