This is the most cynical, politically motivated crime panic in memory. 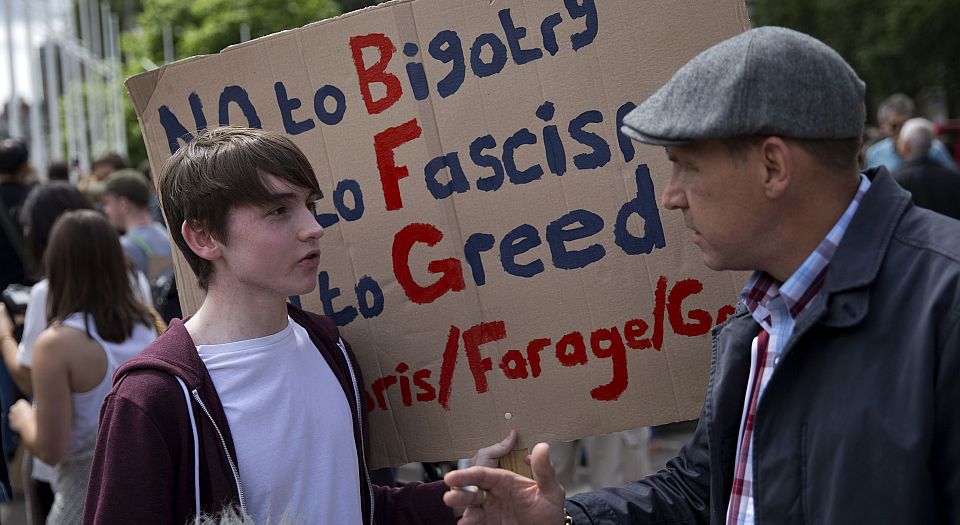 Has there ever been a crime panic as flimsy, as see-through, as explicitly designed to make political mileage as the post-Brexit hate-crime hysteria? Too many people are nodding along to this nonsense, accepting as hard fact every doom-tinged utterance from the police and evidence-lite statement from the Home Office. They repeat and tweet every claim from officialdom about ‘soaring hatred’ since the 23 June referendum, and hold it up as proof that the vote to leave the EU unleashed the latent xenophobia and even homophobia of Them: those sections of society that are Eurosceptical and therefore evil. Enough. This is a moral panic, plain and simple: a naked example of the kind of ‘crime construction’ by the powers-that-be that liberals and leftists might once have critiqued, back when they were more questioning.

The hate-crime hysteria doesn’t stand up to even the mildest scrutiny. This week, the gay-rights group Galop caused global waves when it claimed homophobic hate crime rose by 147 per cent in the three months after the referendum, due to the ‘toxicity fostered by the EU referendum debate’. How does that work, then? There was no anti-gay sentiment in the Leave campaign. None of the arguments for leaving the EU was related to homosexuality. Yet we’re expected to believe that, somehow, a discussion about the future of a Brussels-based institution led to people thinking: ‘Bloody gays. Let’s get them.’ Who’s buying this?

If you’re buying it, hopefully a glance at Galop’s laughably unsubstantiated report will make you think again. The report claims 2.1million gay people in the UK have experienced hate crime at some point in their lives, and many such crimes happened in the three months after Brexit. But these ‘facts’ are based, not on court cases or police investigations or images of bruised bodies, but on one online survey of 467 LGBT people. This survey was distributed through ‘community networks’ of ‘LGBT activists, individuals and professionals’. It asked the 467 self-selected LGBT people if they had ever experienced any kind of hatred relating to their identity. Around 80 per cent said yes. Working from the assumption that there are 2.7million LGBT people in the UK – and, as Galop admits, this is a big assumption, since ‘there are no census figures about LGBT communities’ – Galop extrapolated from the responses of these 467 individuals to say that 800,000 gay men, 500,000 bisexual people, 400,000 trans people and 400,000 lesbians have been the victim of hate crime at some point, with a spike in such crimes after Brexit. I’m going to put my neck on the line and say this is not good science. What we have here are unproven claims, made in surveys distributed by ‘community networks’ that might, just might, have a vested interest in bigging-up the victim status of the gay community; and these unproven claims are then projected on to a gay population at large whose numbers are unknown in order to tell a story about mass hatred for homosexuals that simply isn’t visible in daily life. This isn’t science; it’s hocus pocus.

Yet much of the Remainer lobby bought into this mystical Brexit spike in homophobic crimes, just as they have uncritically accepted every claim of a post-Brexit hate-crime rampage. For months now, politicians and the media have been telling us that Brexit unleashed an ‘epidemic’ of violent spite. Media Remainers latch on to every police statement about spiralling hate crimes as proof that leaving the EU is a disaster, and Britain has overnight turned into a cesspit of backward thinking. Their cloying, uncritical faith in the cops and their figures is touching, but it’s misplaced.

Yesterday, the Home Office issued its annual report on hate crimes. It says there was a ‘sharp increase’ in hate crime after the referendum. In July there were 5,468 hate crimes – 41 per cent higher than the number of hate crimes in July last year. But again, we need scepticism – a lot of it. These 5,468 alleged incidents – I know it’s evil to use the word ‘alleged’ these days, but some of us still believe in due process – have not been investigated, far less tried in a court of law, and therefore there is no hard proof of what happened or whether it happened. This is because these ‘crimes’ (the police and Home Office have given up on the word ‘allegations’) are simply things that have been told to the police, often through their phone or email hotlines. And then the police instantly – instantly – record them as hate crimes, with no need for questioning or investigation of any kind. Every single person who phones a hate-crime hotline is believed. Again, this isn’t science.

For a flavour of how flabby the definition and recording of ‘hate crimes’ has become, consider this stipulation from the Operational Guidance for police forces dealing with such crimes: ‘For recording purposes, the perception of the victim, or any other person, is the defining factor in determining whether an incident is a hate incident… The victim does not have to justify or provide evidence of their belief, and police officers or staff should not directly challenge this perception. Evidence of hostility is not required for an incident or crime to be recorded as a hate crime or hate incident.’ Got that? In order for an alleged incident to be recorded as a hate crime – that is, for a phoned-in claim to become a hard fact – the victim or any other person simply has to say it was a hate crime and the cops will not challenge them for evidence. Remainers constantly decry the Leave lobby’s ‘post-truth politics’, yet they embrace an explicitly anti-evidence method for crime recording, buying into the hate-crime hysteria despite the fact that hate-crime recording, unlike any other crime, is based entirely on subjective feeling.

There’s something almost pre-modern in this instant belief in alleged victims, in this magical transformation of story into fact. Indeed, it brings to mind the cry of John Proctor in The Crucible, Arthur Miller’s play about the Salem witch trials: ‘Is the accuser holy now?’ In the world of hate crime, yes, the accuser is holy. His claim, his word, is sacrosanct; no one may question it. Politics doesn’t get much more post-reality than this.

The alleged post-Brexit spike in hate crime is likely to be down to both this highly relativistic recording of such crimes and also to officialdom’s active trawling for such crimes. Various wings of the authorities went looking for hate after the referendum. From the widespread Twitter-sharing of the police’s hate-crime hotline to the Mayor of London’s special webpage imploring people to phone or email about ‘hate crimes following the referendum result’ (my italics), the authorities were desperate to get more people phoning, because every single phone call is instantly a hate crime and this bolsters their general belief that Brexit has caused instability. They didn’t neutrally, scientifically observe a hate-crime epidemic; they were convinced one was taking place and they set out to prove that. They proved their own theory. They found what they wanted to find.

The true story here is not that Britain became more hateful post-referendum, but that officialdom, aided by spectacularly uncritical commentators, has developed new ways of cynically constructing crime epidemics. And to what end? To the explicitly political end of demonising the choice made by voters in the referendum and depicting Britain outside of the EU as a dangerous place in which old and ugly views have been emboldened. Rarely has the political motivation behind spreading a crime panic been so obvious, so shrill, as this.

And yet no one on the left or in liberal academia is criticising this madness. This is an extraordinary turnaround. In the 1970s and 1980s, left-leaning sociologists and criminologists devoted much intellectual energy to exposing crime and moral panics. The titles of their books and papers say it all: ‘Panic: The Social Construction of the Street Gang Problem’, ‘Juvenile Crime and the Construction of a Moral Panic’, ‘Moral Panics: The Social Construction of Deviance’. They recognised that the authorities’ handwringing over certain kinds of crime – football hooligans, black muggers, glue sniffers – was often fuelled more by fear than facts. And they argued that such panics were often deployed for explicitly political purposes, to demonise a ‘deviant’ section of society and make the case for the introduction of more authoritarian measures. That so many nominal leftists and liberals are not only buying into the Brexit hate-crime hysteria but are actively promoting it confirms the extent to which this political group has abandoned its scepticism of authority, and is now little more than an unofficial arm of the status quo.

There’s a grim irony. Media Remainers accuse Leavers of being authoritarian populists, longing for more social control, driven by a fear of the Other. Yet the hate-crime hysteria suggests this is more true of Remainers. Indeed, the term ‘authoritarian populism’, coined by left-wing theorist Stuart Hall in the 1980s, was originally used to describe those who pushed crime panics as a means of allowing officialdom to problematise sections of society and police society at large. ‘Authoritarian populism’ was never a very useful phrase, speaking as it did to the 1980s left’s wrongheaded, anti-democratic conviction that the authoritarian impulse emanated from below, from the populace, rather than from the political elite. But today it is better applied to influential Remainers than ordinary Leavers, since it is they who spread crime panic; who ‘Other’ whole swathes of society (dumb, hateful anti-EU whites); and who implicitly invite more authoritarian policing and censorship to deal with their utterly invented tsunami of hate. Post-truth, fact-lite, fearful authoritarian – know thyself.

Brendan O’Neill is editor of spiked. He will be speaking at the sessions ‘Are the millennials revolting?’ and ‘Who are we? Identity politics dissected’ at the Battle of Ideas Festival in London on Saturday 22 and Sunday 23 October. Buy tickets here.