Meet the one candidate it might be worth supporting. 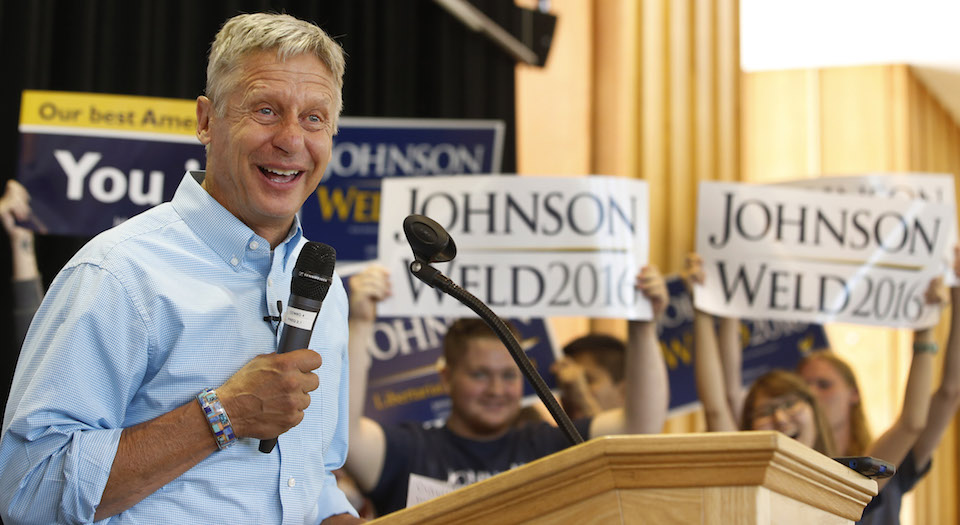 In July, Gary Johnson, the two-term Republican governor of New Mexico, from 1995 until 2003, was busy explaining to a New Yorker journalist why he gave up trying to be the GOP’s presidential candidate: ‘You can’t get beyond those [early primary states], because you have to go out and appeal to anti-gay, anti-abortion, anti-drugs, anti-immigration – and I’m crossways on all of those.’

So crossways, in fact, that Johnson not only joined the Libertarian Party — he is now also its presidential candidate, with another former Republican governor, Bill Weld, as his running mate. Currently polling at 10 per cent, and with the media now paying increasing attention, including an endorsement from Virginia’s second-largest paper, the hitherto strongly Republican Richmond Times-Dispatch, it is conceivable that he will reach the magical polling percentage of 15, and win a place on the televised presidential debates — the political equivalent of the Superbowl, as Johnson himself put it.

In previous election years, Johnson’s rise would have seemed improbable. But this election is different, unique even. And that’s because the two main-party candidates, Donald Trump and Hillary Clinton, are loathed by large, if differing, swathes of the US electorate. With good cause, too. One is an illiberal authoritarian with a slippery sense of the truth, and the other, as the old-new joke goes, is Donald Trump.

Rarely has the choice between two presidential candidates been so unappealing. Clinton’s campaign has cynically drawn on an unhealthy wellspring of identity politics, first playing up the fact, long acknowledged one imagines, that she’s a woman, and, second, desperately ‘blacking up’ in an attempt to appeal to what her campaign team calls her ‘firewall’: namely, black voters. And then there’s Trump, a daft-haired void of a man feeding noisily and boorishly on the vacuum of the established politics while his alt-right fanboys wet themselves, and making anti-political, vaguely conspiratorial hay while the sun sets on the empty technocracy that the likes of Clinton have come to embody.

Which is why Johnson stands out. For a start, this sneakers-with-suits 63-year-old is immensely likeable. He’s not eaten up by his own ego, he’s self-deprecatingly candid, and he’s refreshingly free of the stain of identitarianism, be it Clinton’s ‘Grandma knows best’ schtick or Trump’s white-man self-pity. But above all, he’s principled. He’s running for president because he believes in something beyond the imperative of getting elected. The end has not been sacrificed to the means.

As his candidature for the Libertarian Party indicates, his end, his principle, is freedom, and his political objective is to enlarge its potential exercise. As he told the Richmond Times-Dispatch, ‘I’ve always comes down on the side of personal choice, as long as those choices don’t harm others’. Or as his campaign website puts it, ‘I want to get the government out of your life. Out of your cellphone. Out of your bedroom. And back into the business of protecting your freedoms, not restricting them… People, not politicians, should make choices in their personal lives. Responsible adults should be free to marry whom they want, arm themselves if they want, and lead their personal lives as they see fit.’

From that commitment to people’s freedom, that conviction that we know what’s best for us – a conviction that undergirds democracy itself… from that, all else follows. He wants to abolish that symbol of state infallibility, the death penalty; he wants to legalise marijuana (which has been the tedious focus for a lot of the media coverage); and he wants to defend our right to privacy, especially given its parlous online state (or, as he put it, ‘there is nothing wrong with the internet that I want the government to fix’).

But it’s on the big issues that his commitment to freedom shines through. So while Trump has been hyping up the threat of ‘illegal immigrants’, and talking of building a wall to keep the Hispanics out, Johnson cuts a far more liberal path. Criticising Trump’s use of the phrase ‘illegal immigrants’ (‘undocumented workers’ is Johnson’s preferred term), he countered: ‘They came into this country because they couldn’t get in legally and the jobs existed, and you or I would have done the same thing.’

On Trump’s Mexican wall, Johnson is unequivocal: ‘The only thing a big wall will do is increase the size of the ladders, the depth of the tunnels, and the width of the divisions between us. Candidates who say they want to militarise the border, build fences, and impose punitive measures on good people, ground their position in popular rhetoric, not practical solutions.’

Likewise, Johnson’s foreign-policy position is fuelled by a sense of the principle of others’ self-determination. ‘Not isolationist, but non-interventionist’, is how he put it. Compare that to Trump’s shallow bellicosity, or Clinton’s support for the invasion of Iraq in 2003, and actual involvement, as US secretary of state, in the unravelling of Syria, including advocating covert support for anti-Assad forces. Of US involvement in so-called regime changes, Johnson says: ‘In my lifetime I can’t think of one example of regime change making things better.’ Speaking to the Military Times, he continued: ‘I get incensed over politicians that beat their chest over going out to fight terrorism at the cost of our servicemen and women.’ Admittedly, he’s no pacifist. ‘We need to build a strong military’, states his campaign website. ‘But’, he continues, ‘we should not use our military strength to try to solve the world’s problems. Doing so creates new enemies and perpetual war. Besides, we have enough problems to solve right here at home.’

There may be plenty on which to disagree with Johnson, but in his principled pragmatism, his deep-seated commitment to expanding the sphere of our freedoms, he is the one candidate in the upcoming presidential election that it might just be worth supporting.