How the IMF and the EU screwed over Greece

The IMF finally admits its role in this act of economic ruin. 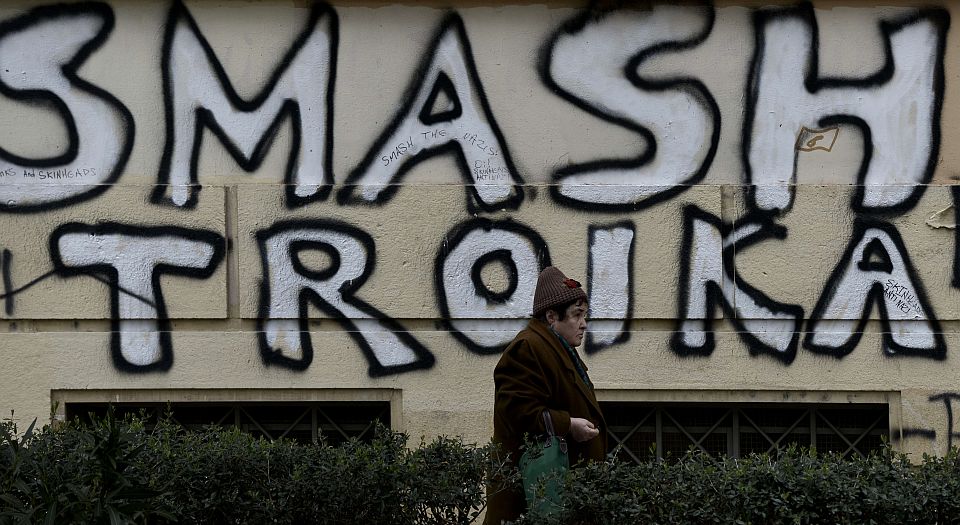 Little over a year ago, liberals and lefties across Europe applauded a then-defiant Alexis Tsipras and his Syriza government in Greece as they faced off against the Troika – the coalition consisting of the European Commission, the European Central Bank and the International Monetary Fund – which was holding Greece’s economy to ransom. Greece was seen as standing up to the Troika’s ruinous economic policies.

How long ago that feels now. With the establishment still in a tizzy over Britain’s vote to leave the European Union, the Troika’s treatment of Greece has been all but forgotten. However, a new report on the IMF’s handling of the Eurozone debt crisis, when it first flared up in 2010, has brought it all back again. The report, published by the IMF’s own watchdog, the Independent Evaluation Office, reminds us just how egregious the Troika’s actions were in the wake of the Eurozone debt crisis, primarily in relation to Greece.

While the IMF likes to think of itself as a disinterested, purely technocratic institution, the report outlines how it became beholden to EU dogma. ‘Before the launch of the Euro in January 1999, the IMF’s public statements tended to emphasise the advantages of the common currency more than the concerns about it that were being expressed in the broader literature’, the report notes. That is, despite the numerous sound criticisms of the Euro, the IMF itself remained enthralled by the idea. Even as the economic problems of the Euro began to emerge, the IMF remained blind to them. The IMF, the report notes, saw Europe as different, as immune to the sort of financial crises that had emerged elsewhere.

When the crisis came, the IMF provided bailout funds to Greece on the condition that it introduce painful economic reforms, which have kept it in economic depression ever since. However, going against IMF rules, these reforms were enforced without the offer of debt relief, despite the clear unsustainability of Greece’s long-term debt. Greeks saw their wages and welfare benefits slashed, further reducing the country’s ability to service its debt. As a result, the Greek economy has shrunk by roughly 30 per cent in the past six years. Eventually, in 2012, a plan for restructuring was agreed. But by then, the damage had been done. Greece’s debt obligations were spiralling out of control.

So why didn’t the IMF follow its usual course of action and offer some debt relief to beleaguered Greece? As the report notes, the IMF recognised in 2013 that ‘upfront debt restructuring would have been better for Greece’. However, this did not go ahead because it was deemed ‘not acceptable to the Euro partners’. Brussels, the report admits, was not prepared to risk revealing the unviability of the Eurozone project. The IMF duly obliged. Greece’s economy – and the people and businesses that comprise it – were to be sacrificed, lest the weakness of the Euro become clear.

The report admits that ‘the Troika arrangement potentially subjected the IMF staff’s technical judgements to political pressure from an early stage’. This gives the lie to the idea that technocrats – managerial experts formulating policy beyond the reach of the demos – are somehow benignly disinterested. The Troika was working towards a clear political goal: the preservation of the Eurozone. When the Eurozone crisis hit, the Troika acted as if it was calmly pursuing appropriate solutions. But, as the report notes, this was not the case: any ‘solution’ was acceptable, so long as the Eurozone project was not put at risk.

This report is as much an indictment of the European Union as it is of the IMF. It makes clear that the EU is not a disinterested, technocratic project – it is a political project beholden to a ‘unified’ Europe at all costs. Those who supported Brexit are often castigated as irresponsible for putting politics – namely, the idea that the demos should decide who rules them – before the interests of the UK economy. Yet it is the EU that has created economic ruin in the pursuit of political ends. Fear of the Euro unravelling – the death knell of European integration – resulted in Brussels forcing economic ruin upon Greece. And, for this, the Greek people are still paying a price.