The Turkish coup and the crisis of liberalism

The failed putsch exposes the problems facing modernity itself. 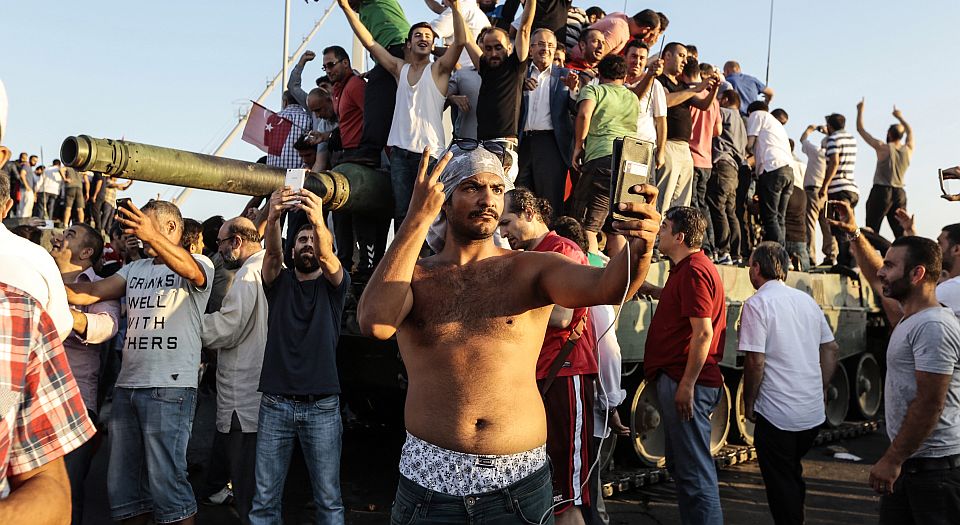 It may have lasted less than 24 hours, but the failed putsch in Turkey gave us a terrifying glimpse into the parlous state of secular, liberal values in the 21st century. Not only in Turkey itself, where the failure of the secularist army plotters to tap into any significant section of society suggests Atatürk’s Reforms, the modernising project initiated by Turkey’s first president in the early 20th century, may finally be exhausted. But also in the West, too, where too many hoped the coup would be successful, dislodging authoritarian Islamist president Recep Tayyip Erdogan and installing ‘democracy’. If modern Turkey has little faith in liberalism, then many in the modern West have little understanding of democracy. The coup has exposed the shallowness of both the Middle East’s and the West’s attachment to true liberal values.

The most immediate thing revealed by the failed coup is the slow, sure demise of secular political projects in the Middle East, and the corresponding victory of political Islam. The failure of the coup to raise up any serious constituency in Turkish society was striking, and proved to be its downfall. As one expert on Turkish affairs put it, it was ‘wide but not deep’. He meant that while it was spread across significant sections of the army, and parts of the judiciary, it lacked roots in society; it lacked a connection with any kind of public. This speaks, profoundly, to the withering of the secularist ideal in modern Turkey. Set in motion by President Mustafa Kemal Atatürk in the early 20th century, the new republic of Turkey was intended as a European-style secular nation state, devoted to reforming the Islamist outlook of the Ottoman Empire and adopting European laws and jurisprudence. The failure of the army to rally many to that 20th-century cause, against the Islamist Erdogan, suggests Turkey’s republican ideals may have run their course.

The end result was the image of fresh-faced army conscripts, barely in their 20s, being arrested and in some cases beaten by angry members of the public who support Erdogan. It was a graphic metaphor for the inability of any part of the Turkish state to make a decent account for secularist, liberal ideals. It is left to painfully young soldiers to defend — or not to defend, as their large-scale surrender suggests — the values that form the foundation of the Republic of Turkey. This echoes developments across the Middle East, where, as a result of war, internal instability or exhaustion, nationalist, secularist projects have been in decline for a decade or more, allowing Islamists to fill the subsequent vacuum. From post-war Iraq, where authoritarian Baathist nationalism has been replaced by apocalyptic religious clashes for influence, to the various nations that underwent the Arab Spring only to discover that Islamist parties were the only ones with sufficient social and moral clout to take on governing roles, the 20th-century adoption or importing of nation-state ideals in the Middle East has hit a brick wall. The crisis of secularist Turkey reflects a broader regional crisis of modernised politics.

This is the true dynamic in the Middle East today: not the forward march of a confident Islamism, but the opportunistic expansion of political Islam into the hole left by the decline of the 20th-century and postwar order in the Middle East and by the failure of any secularist political group to assert a vision. And this means that the response of many in the West to the attempted coup in Turkey was worse than useless. Their conviction, or hope, that the Turkish military might live up to its Atatürk-decreed responsibility to guard secular, liberal values suggests they misunderstand the seriousness of the crisis of enlightened politics — as if it might be reinvented by a few thousand conscripts — and misunderstand democracy. In the name of defending democratic values, they’re willing to see Turkish democracy overridden, and destroyed. Liberal political values might be flagging, but Orwellianism lives.

These outside observers seem to think Turkey is the same as Egypt, and that its military might do what the head of the Egyptian armed forces, Abdel Fattah el-Sisi, did in 2013: seize power in the name of propping up secular, liberal society. They cannot see how different Turkey is to Egypt. Turkey is a functioning democracy. For all Erdogan’s illiberalism and power-grabbing, he was genuinely elected. They also cannot see, or refuse to see, what a disaster the Sisi regime has been for the very values they claim to want to defend. Since sweeping aside the elected Muslim Brotherhood president Mohamed Morsi, Sisi’s regime has massacred thousands of protesters, imprisoned thousands of dissidents, and destroyed freedom of speech. Similar atrocities followed the last Turkish coup, in 1980: ‘disappearances’ of dissidents, executions, restrictions on liberty.

A military coup to restore liberal values is a disturbing contradiction in terms. Democrats must always remember that the worst elected politician is better than the most secular-minded army chief. People have some control over the former, none over the latter. That some in the West either expressed support for the coup or, in the case of Washington, London and Brussels, waited to see how it played out before deciding whether it was a good or bad thing, exposes one of the key drivers behind the crisis of liberal, secular politics in the Middle East: the fact that we in the West, us self-styled guardians of such values, have lost faith in them, too. From the hysterical response of Europe’s intellectual elites to the Brexit vote to the failure of our political classes to condemn the Egyptian coup, the Western attachment to democracy gets weaker by the day. And this does nothing to hold back the opportunistic spread of Islamist ideals over secular ones — and in fact could very well inflame it.

Indeed, it’s worth contrasting the rise of the Europe-influenced ‘Westerners’ like Atatürk during the founding of modern Turkey in the 1920s with the difficulty that the EU has in inspiring or impacting on Turkey today. A hundred years ago, European values, even following the barbarism of the Great War, counted for something; they had some meaning. There were many in the West keen to export them, and many in the East keen to embrace them. In contrast, today we have the post-liberal, technocratic machine of the EU drawing up tests and lists of regulations that countries must pass before they can be considered for membership, as if becoming ‘European’ is a strictly bureaucratic exercise. And then we wonder why the comparatively political and moral project of Islamism is gaining ground.

The crisis in Turkey speaks to more than a crisis in Turkey: it shines a light on the fall of European ideals. The immediate victims will be Turkey’s genuine liberals and Kurds, who are now likely to suffer a severe crackdown by the bolstered Erdogan regime. But all of us have a stake in defending real liberty and democracy today, and in offering solidarity to those who suffer for fighting for these values both abroad and at home.